How the public filled WW1 servicemen's jobs on the home front

So many young men were away from home, fighting during WW1, that their essential jobs needed to be filled. Doing so fell to those left behind on the home front who found themselves working in areas that would never have crossed their minds before the war.

The page is divided into four main sections:

Jobs that maintained law and order

Special constables and the Special Constabulary

The Special Constabulary was a voluntary, part time organisation organised along the same lines as the regular police force. Their main task was to oversee the secuity of the water supply as it would have been all too easy to for the Germans to contaminate it causing incapacitation and loss of life. I understand that the hours of work were considerably less than those of the Volunteer Force.

Special constables often had to travel for which their expenses were paid.

My grandfather was a special constable. His regular job was in insurance. The image shows him in uniform. I had thought that it was his truncheon in his left hand, as this is still in the wider family, but the box gives a more likely possibility.

The uniform of a special constable*

Tails side of a special constable long-service medal from the 1914-18 war*, reading:
'For faithful service in the Special Constabulary'

What is the special constable holding?

What the special constable is holding looks more like a rolled flag than a truncheon. Also truncheons were kept in a special pocket in the right leg of the uniform.

In those days it was the custom (as with other military medals) to have the name of the recipient engraved around the rim, and Philip Richer's name is engraved round this rim. The practice was discontinued in World War Two.

Certificate of thanks for services rendered in the WW1 Volunteer Force, 30 July 1916-12th February 1918*

Tap/click for a larger legible image

The Volunteer Force was the First World War's equivalent of the Second World War's Home Guard. It was staffed by men who were not called up for military service due to age or disability. These men kept their normal day jobs and worked on a rota system to look after the community's wartime needs in their spare time. My understanding is that it was voluntary, but no doubt pressure was put on for men to join.

A uniform was eventually supplied.

The image shows a certificate, signed by Winston Churchill, the then Secretary of State for War, expressing the King's thanks for services rendered by my husband's grandfather as a member of a Kent Volunteer Force in the First World War. The king was George V and the volunteer's day job was a butcher.

Jobs that kept the public fed

We tend to connect land girls with World War Two, but the Women's Land Army was created in 1915 during World War I by the Board of Agriculture so that young women could work in agriculture, replacing men called up to the military.

I knew little of them, but there is a lot about land girls in World War Two. They did a wonderful job, so land girls and lumber jills probably also did a sterling job in World War One.

Schoolboys work in the fields

My future husband, who was in the same year as me at school, but who I didn't know at the time because of boys and girls being segregated, always said that his class had often been taken off school to work on the fields. 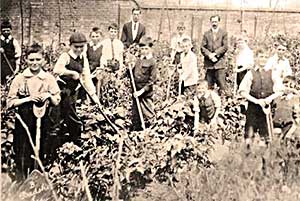 Boys taken off school to work in the fields as part of the war effort to produce home-grown food during World War One.***

Note the wooden handles of the spades which would have been very heavy to use.

My husband always claimed that this enforced absence from lessons always seemed to take place when there was an English lesson. He was an able man, but never grasped the rudiments of punctuation and grammar until our daughter explained them while being at a grammar school in the 1950s. He asserted that the school teachers themselves didn't understand grammar. How true this was, I can't say.

Work on the harvest

Bringing in the harvest before winter set in was essential, particularly in wartime, when the Germans were sinking ships bringing imports, and everyone was expected to lend a hand, including boys and girls. In country areas, schools even closed for the harvest period. Hybrid wheat had not been developed and it grew taller than today's varieties. This meant it took longer to mature which was why it was a race against time between the harvest and the bad weather.

Householders' work in gardens and allotments

Everyone did their best to play their part. Vegetables and fruit were grown in private gardens and allotments.

It would be impossible to recount all the miscellaneous jobs that someone managed to fill, be it women, older men and children. My aunt worked on the trams. Women and older men looked after and served in shops, but there must be many more examples.

My great-aunt Nancy had to do the milk round, while her mother and elder sister ran the shop. She was just 12 years old!

One of my aunts worked at a munitions factory, the Royal Small Arms Factory in Ordnance Road Enfield. She filled shells and had a yellow tinge to her skin due to the explosive powder that was used with very little personal protection.

My mother told me that the women who worked in the munitions factory were well-paid to compensate for what it was doing to their skin, but many women told her that nothing would recompense them for a job that made their skins go that colour!