Rationing and shortages in WW1

Rationing of certain foods was introduced in 1918 close to the end of World War One, after German submarines had succeeded in sinking ships carrying imports into Britain.

However, neither of my parents ever mentioned any sort of rationing or shortages in their childhood, and my mother in her extensive recollections of life in that period wrote nothing about them either. Of course families grew their own fruit and vegetables in back gardens and allotments, and the pests of grey squirrels had not yet arrived.

So I can't imagine that rationing affected ordinary people very much, probably because it was in operation for such a short time. This page is in response to finding my father's old World War One ration card while going through his papers.

The ration card is of a rather dreary non-descript colour with an elaborate background pattern which was presumably intended to make it difficult to forge. It is printed on one side only. 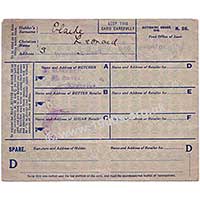 The card appears to have been set up for the immediate purposes of rationing meat, butter and sugar, but there are also spaces for other commodities to be added at a later stage.

Registering with shops for rations in WW1

The card shows that individuals were required to register with a retailer for meat, butter and sugar and that the retailers rubber stamped the registration. Unfortunately the stamps have become too blurred over the years to be legible, but the word Silver can just be made out inside the butcher's stamp. So presumably my grandmother registered my father with a butcher in Silver Street, Edmonton.

How the ration cards were issued

The ration cards seem to have been issued road by road, because my grandparents' address of 3 Warwick Road shows a rubber stamp for the road name, with the number 3 inserted by hand.

The card bears the instructions:

To register for MEAT, BUTTER and SUGAR, fill up the counterfoils A B and C on the lower half of card, and give them to any Retailers you choose. The Retailers must write or stamp their names and addresses on these spaces. You will not be able to change your Retailer again without consent of the Food Office.

How long did WW1 rationing last?

Although the card is clearly in my father's name, Leonard Clarke, it was never signed by either of his parents. (He was only 11 years old at the time.) In fact it gives the impression of having never been used.

During the World War One, bread had, by UK law, to be sold by weight, not by loaf.

Bread was not rationed, but steps were taken to decrease its consumption. The government issued an order saying bread could not be sold to a customer until at least twelve hours after it was baked. The thinking behind this rationale was that fresh bread was very difficult to cut thinly, and people would therefore consume more if the slices were thick. Furthermore, the more appetising taste of fresh-baked bread was more likely to encourage people to eat it 'immoderately'.

Another measure was to replace the ordinary white variety of loaf with a 'national loaf' made from wholemeal grain. We now look upon this as a healthier option, but at the time most people disliked the taste and found its colour unappetising, while many housewives blamed it for a variety of digestion problems.

from information supplied by the
Association of Master Bakers
for 'Charlotte's Beastly War' by James Melik, reproduced with permission

In order to be sure not to break the law, bakers weighed out or gave away extra little pieces of bread like tiny rolls with the loaves that they sold. According to my mother - see the Bakeries page - these were known as makeweights. Children - who used to go on errands to the bakers - were usually allowed to eat these makeweights on the way home.

Other records state that coal was rationed towards the end of the war and that it hit people hard because coal was effectively the only form of energy for heating and cooking. However the ration card does not confirm this. I originally wondered if coal rations were not for individuals but for households, and this has since been confirmed - see the box below.

Britain had plenty of its own coal. So presumably the shortage was due to miners who had been drafted to the fighting front. If you can add further information, please get in touch.

"Coal has been in short supply for several months and has been rationed by the number of rooms one has in the house."

Although there was no rationing until early 1918, a pamphlet issued in 1916 urged civilians to conserve vital materials. Entitled Every Household Must Help to Win the War, it quoted Lord Kitchener as follows:

Which is it to be? Economy in the Household or shortage in the Navy and Army? If sailors and soldiers are to have all they need, and the War is to be carried to a victorious end, every member of every household must do without comforts, luxuries, and all else that is not essential to health and efficiency. Waste nothing, to save is everything, and to lend to the country all you can is the truest patriotism.

The pamphlet went on to explain how waste could be avoided.

Save Coal. Coal is wanted for the Navy, for the Army and for our Allies. Save Light. Coal is used to make light and to waste light is to waste coal, and thus to make things harder for ourselves and all who depend on us.

extracted with permission from 'Charlotte's Beastly War' by James Melik,
available from Amazon

The end of rationing

Newspaper article on the end of WW1 UK rationing

The image of the newspaper cutting gives more information on the end of rationing. It is dated 2nd May 1919.