Kitchener's 'Your Country Needs You' poster Widely claimed to be a World War One propaganda poster* 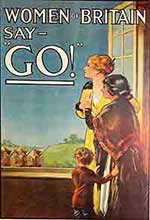 Today the poster on the right is probably the most recognisable icon of First World War propaganda. General Kitchener's pointing finger seems to be addressed directly to whoever is looking at it. By saying that "Your country needs YOU", it relies on patriotism and the warm feeling of being needed.

The 'your country needs you' poster is not all it seems

According to an article in The Telegraph (4 August 2013) Kitchener's famous 'Your country needs YOU' image was never on a war poster.

Apparently research by James Taylor has shown that no such poster was produced during the First World War and that the image was never used for recruitment purposes. It only became well-known and well-used after the war ended. He concluded this after studying the official records of the Parliamentary Recruiting Committee in the National Archives and thousands of photographs of street scenes and recruitment offices.

James Taylor traced the image to the cover of the popular magazine London Opinion (5 September 1914), barely a month after the war started. It was designed by Alfred Leete, a graphic artist. A subsequent edition offered postcards of the image 1/4 (one shilling and four old pence) per hundred.

James Taylor's book Your Country Needs You shows how the image and slogan were adapted for use in other countries, for example the United States and the Soviet Union.

There were of course genuine propaganda posters and the internet is by no means short of them. The poster on the right is an example.

Like all propaganda, it attempts to make people do what the initiator wants, by conjuring up feelings of guilt, responsibility or patriotism. It implies that the women of Britain were urging their menfolk to join up and go off to fight - and of course many men did want to please their women.

Whether or not women really did want their men to go away and fight is open to question. Women at home were generally patriotic, but they had no idea of the dreadful deprivations, and probable physical disability or death that this would involve.

*Photographed by the webmaster in The Royal Signals Museum