Air raids over the UK in WW1

Where air raids struck most in the UK

Air raids in the UK in WW1 were mainly along the east coast which the German planes, zeppelins and air-ships could most easily reach. We in London did have air raids, but they were nowhere near as lethal as those of the WW2 because the weapons were less advanced and the bombs weren't as accurate.

The sky in air raids 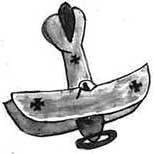 A German biplane swooping over Edmonton in the First World War - contemporary drawing by the webmaster's uncle, Bill Clarke, a child at the time.

When there was an air-raid, we children loved to see the searchlights criss-crossing the sky at night, and it was a highlight for us to see a German aeroplane caught in one of them.

I remember one evening in particular when a German plane was brought down in flames. The brilliance and colour of the display lit up the whole sky and my brothers and I were mesmerised at the sight of it, and thrilled and proud at what we regarded as a mini-victory for our country.

Our mother, though, did not smile. She simply remarked on the sadness for some family, somewhere. With hindsight, as an adult, having lived through the air raids of the Second World War, I of course feel the same, and am ashamed of our childlike reactions. 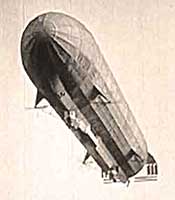 Reports of zeppelin bombings on the Eley munitions factory show one bomb hitting it, but not detonating on October 13th 1915. (Enfield At War 1914-1918, Geoffrey Gillam, page 30)

Zeppelin attacks during 1916 (3rd September and 1-2nd October) were shot down with no major damage done within Enfield. (Tottenham and Edmonton Weekly Herald microfilm September & October 1916)


A German airship crashes at Cuffley

On October the 1st 1916, when I was ten, a German airship - lighter than a zeppelin - did manage to reach near us in Edmonton. It was brought down in flames at nearby Cuffley and made headline news because it came so close to the centre of London and because it killed the renowned of the German airship commanders, Heinrich Mathy.

The tremendous death toll of the 1914-18 War was borne by the soldiers fighting on the overseas fronts, not by civilians. As children, we were too young to understand death, loss of mobility or disfigurement. So the variety of sights associated with the war on the home front were fascinating and even enjoyable.

What observation balloons were and why they were necessary

One counter to air raids were observation balloons carrying one or more observer which could rise high in the sky to spot aircraft in the distance. They were also used overseas close to enemy lines.

Observation balloons were fabric, filled with a gas that was lighter than air, typically hydrogen or helium, with a basket attached underneath for navigators and observers.

There was an Observation Balloon Station in Hazelbury Road on the Huxley estate where we lived in Edmonton, next to The Latymer School. There were several huge balloons there, tethered to the ground with thick cables to prevent them flying away. They seemed to be stationary in the sky pulling upwards and sideways on their cables. We could see them from what seemed like miles away.

The lack of modern technology also meant that the occupants of a balloon had to map read and steer from landmarks and the position of the sun. It was all too easy to be blown off course and get lost.

One day when I was out with my father a balloon dropped down close to us. The men inside were lost.

"Where are we?" one of the men shouted down to my father.

He shouted back up, "Edmonton, Middlesex". The man thanked by father and did something to make the balloon rise up higher and head off.