a typical estate a typical
house rents,
costs and incomes house
plans the
kitchen the
kitchen
fire the
scullery the
parlour the
bedrooms the
windows the
front approach the backyard and garden the
outside
lavatory

My mother's family lived on a working class housing estate which was typical of the Victorian terraced housing that popped up in previously rural areas towards the end of the 19th century and at the beginning of the 20th century. 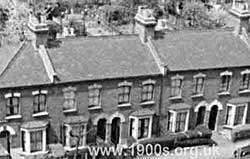 A road on the Huxley Estate showing how the houses were laid out in pairs, one being the mirror image of the other.

The estate was the large Huxley Estate in Edmonton [now reassigned as Enfield] on the northern outskirts of London, but it was effectively typical of other Victorian housing estates elsewhere in the UK.

The roads on the estate were laid out on a grid with all the roads straight unless there was good reason for the occasional curve. The houses themselves were terraced, i.e. all joined together.

Terraced housing was the norm but the regularity was broken up by building the houses in mirror image pairs, so, for example, 116 and 118 had adjacent front doors, and 116 shared its chimney stack with 114, and so on. So the floor plans of alternate houses would be the mirror image of one another.

Embarrassing episodes due to the houses being in mirror image pairs

Because the houses were in mirror image pairs, front doors were next to neighbours' front doors. So when, as a teenager, boyfriends escorted me home, the neighbours would often arrive home while we were 'saying goodbye' on the doorstep. It was very embarrassing!

There were of course larger Victorian and Edwardian houses, but they tended to be individual or in small blocks, like my father's family home in Pymmes Villas.

House foundation problems on the estate

The houses on the terraced housing estate had no brick foundations, but were built on wooden beams, about twelve inches square cross-section. This was fine until the beams rotted, which I know for a fact happened in Warwick Road!

On the Huxley Estate, building started in the late 1800s and went on into the early 1900s.

Warwick Road and Sheldon Road were the first roads to be built. They are shown on the 1894 Ordnance Survey map of the area which makes them genuinely Victorian.

The house where my mother grew up was built a few years later and was therefore Edwardian, but was in the same general style.

If you, with your 21st century norms, could be transported back to around 1911 to any one of the roads on this estate or any other such typical estate, you would be hard pushed to tell the difference between them. Not that the residents of the time would have seen things this way: As each new road was built, the insides of the houses improved in facilities and finish. The houses in the newer roads were offered to the better-off existing tenants or their children. So a natural gradation in quality and social class took place across the estate. Cheddington Road was either the last or one of the last to be build and was considered rather upmarket at the time.

The trust which owned the Huxley Estate

The Huxley Estate was owned or in trust by the Kilbride family when I started working there in the 1960s as a member of the 13-strong maintenance team.

Size and composition of the Huxley Estate

How I knew the Huxley Estate

I started as a painter's assistant in Bulwer Road on the Huxley Estate; the painter himself lived at number 155 Haselbury Road.

After nearly two years and painting whatever the weather threw at us. I progressed to a bricklayer's labourer who also did plastering and drainage work. It was hard work but I enjoyed it.

After a while and only having been married for a short time, I was offered a position as a rent collector, working from the office at number 3 Lopen Road. I was rather reluctant to do the work as it involved maths which I found difficult. However I stuck with it and really enjoyed meeting so many of the tenants, young and old.

Whilst collecting the rents it was also my job to make notes of any repairs that were needed, and I found that quite a lot of the tenants wanted conversions from three rooms on the first floor to two and one bathroom, and I did the plans to submit to the Council for approval.

As a married man working on the estate, I was entitled to one of its houses. Consequently I moved into number 14 Lopen Road, which I was later able to buy.

The agents of the new landlords in Tottenham sacked all the staff working on the estate apart from myself and the manager in the office, and they offered the houses for purchase. Consequently the rented houses on the estate slowly dwindled as more and more tenants purchased their houses. (Sitting tenants benfited considerably financially - see the final section of the page.) Houses that became empty were sold at auction.

My new position at the agents was rent collector and maintenance manager but with increased responsibility from 650 properties to 4500 in and outside the estate.

I worked in property management until I retired and by then my portfolio had risen to 7500 all over the country.

House-style and how it differed from one road to another

As an example of the changes which distinguished the house-building over time, 120 Warwick Road had a large earthenware bath in the scullery, which, when not in use, had a cover over it which doubled as a worktop. The bath may have been discontinued in the later-built houses as it was large, had a rough internal finish and would have taken a lot of water - which had of course to be heated by the copper or a kettle.

A more recent photograph of a road on a Victorian housing estate: Cheddington Road on the Huxley Estate in Edmonton [now Enfield].

The most striking difference between the early 1900s photo of Warwick Road and the more recent one of Cheddington Road is the number of cars - although, of course, the roads have moved with the times in various other ways too.

Another difference is that, as residents of the 'now' houses own them, rather than renting them as they did in the early 1900s, the front approaches are differently decorated. Consequently the 'pleasing uniformity' that my mother noted is gone.

I have not visited the estate since I was a child, but I do remember that there were broadly similar Victorian-style terraces in adjacent roads.

From renting to buying: from tenant to owner

When the Trust which owned the Huxley Estate was wound up in the early 1970s, we were all offered to purchase our homes as sitting tenants.The price depended on whether you had a bathroom or not but the stipulation was that if you didn't have one you needed to install one in one of the bedrooms or have an extension built to accommodate the bathroom on the back. My parents were elderly so my brother and I bought the house together (with an additional loan for the extension). Our mortgage was just £1,250 with repayments of just £30 per month! A number of the houses were sold for under £1,000. Whilst the extension was being built we modernised the kitchen too. The house was sold in 1980 when I persuaded my mother to move out. It raised around £20,000 then. So buying when we did proved quite an investment!

The Huxley estate was offered for sale shortly after my wife and I moved into number 14 Lopen Road, and as a sitting tenant paying £2.50 per week we purchased the house for £2250 - a huge piece of financial luck!