One type of large family house

In the early years of the 20th century, Edmonton (now Enfield) in Middlesex, north London was a pleasant, rural place to live. There were large houses as well as the relatively small ones on the Victorian terraced housing estate where my mother grew up.

One such set of large houses was in Silver Street, Edmonton. It was aptly named Pymmes Villas because it overlooked the large green and open area of Pymmes Park. Pymmes Villas are long-gone, being casualties of the bombing of Edmonton in a 1940 air-raid in World War Two, but descriptions do exist.

My father's Clarke family moved to number 82 Silver Street in Pymmes Villas in the late 1937 or 8, and during the 1990s I asked the surviving members of his family to describe the house for me. Below is what they wrote.

82 Street, Edmonton was a three-storey mid terraced house which we bought from Mr David Hatfield, a preacher in charge of Tanners End Mission. The house had a rather long front garden with a tiled path leading up to the front door. Mr Hatfield wanted us to let him have the brass horseshoe knocker from the front door after he had sold us the house, but my father refused, saying that it would spoil the look of the door.

Pymmes Villas, looking towards the hospital. 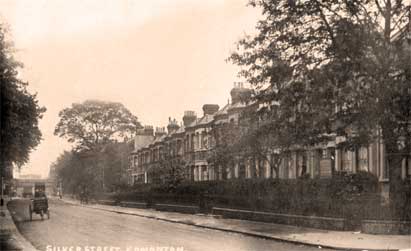 To the right was a lawn surrounded with a flower garden. In front of the front door was a small hole covered by a metal plate. This was for the coalman to shoot coal into the basement, which was a very large room - a coal cellar at one end and a workbench in the middle.

The front door opened onto a passage, which led to a staircase and beyond to the kitchen/ dining room which housed a kitchen range. The table had two loose leaves which, when opened out, was ideal for playing table tennis on.

On the right of the passage was the lounge which had a small snooker table in the centre. Two large double wooden doors led into the study. These could be opened up to accommodate a party. Leading off from the study was a conservatory which housed a few indoor plants.

The garden was average size, containing mostly flowers but Dad usually liked to grow a few shallots and some tomato plants. (He had an allotment along Silver Street.)

The second floor contained two bedrooms. My bedroom was on this floor.

The house had an upstairs bathroom, which was fairly unusual for the time. I recall that when I had a bath there once, my brother Cyril said, "When you have had your bath, Eric, run one for me, will you?" I replied "Yes, all right" - and I did, but I didn't tell him. The next thing I knew was that pandemonium had broken out. People were rushing about shouting, "Water's running downstairs". The water was heated by a gas-fired geyser at the foot of the bath.

After the World War Two bombing, the Pioneer Corp was let loose on the bombsite which our house had become. So I suspect that anything of any value was either stolen or covered up by the debris. I had no knowledge of the knocker being saved. The only thing I managed to salvage was my stamp album, a bit battered though.

I have since learnt that the house was actually two storey with two bedrooms in the roof, giving the illusion of three storeys.

Also the 'rather long front garden' was probably measured in comparison with the front gardens of the Victorian terraces on the local housing estate.

Compare the coal storage in the basement /cellar of the largish Pymmes Villas with the coal-hole in the sculleries of the local housing estate.

82 Silver Street was one of a terrace of several houses. Beyond them was the North Middlesex Hospital and beyond that was Klingers stockings factory. Next came Weir Hall where Mr Clarke had his allotment. The house had been bought from Mr Hatfield, a deacon of Tanners End Mission. Mr Clarke paid cash. I do not recall the price but he certainly borrowed some money from your father.

You approached the house up quite a path, as the house was well set back from the main road. The path included some steps. The pride and joy of the door was a solid brass knocker which was quite a feature.

The front door opened onto a longish narrow hall. To the right was the front room which was very large. I have seen 15 to 20 people in it. Behind the front room was another room furnished with a dining table and chairs but this room was only used on special occasions. Then the hall finished with the kitchen which was used as the living room.

Beyond the kitchen was the scullery where Mrs Clarke did the cooking. Then came the door to the garden which was 80 to 100 feet long. It was narrow with a centre path and plenty of flowers either side.

Upstairs there must have been at least five further rooms, and bathrooms and toilets, but I only ever went in Doris and Mary's bedroom on the first floor. At that time only Arch had left home. Len, your father, was in Africa, but he returned to live there for a short before marrying. Cyril was still there before he moved to Cambridge. That left Bill, Horace, Hubert and Eric; also Mary and Doris.

Mrs Clarke had help in the house from an old friend, a Mrs Matthews, originally from Newfoundland.

After the bombing, I think that Mr Clarke died of a broken heart. He had been through so much - losing his nice house in Edmonton, losing his wife for whom he had bequeathed half his pension rights, seeing what Mary was suffering from her legs being burnt with one being amputated, watching his sons being drafted into the army, navy and air force and finally losing Horace. Horace was the fifth son and a real heart throb. Like Mr Clarke, he worked for the Prudential and had more or less taken over Mr Clarke's workload. He was enlisted into a tank regiment a month or two before the house was bombed. He was given compassionate leave to find his mother's body, sent to Tunisia and blown up in his tank on Day 2 in action. His grave is in Tunisia. This seemed to me to be the final blow for Mr Clarke. His heart gave up. My husband, Bill was away at sea, but the navy gave him compassionate leave twice - first to see his dad in hospital and then for the funeral. When we saw Mr Clarke in hospital the day he died, he looked very peaceful after all the stress and anguish he had been through.

I only went to 82 Silver Street once (in 1938) as I was nursing in Newcastle upon Tyne, and, as far as I can recollect, the large room at the front was the sitting room with a piano which grandmother played and the whole family gathered around for a singsong. The room beyond was the dining-room with a huge table and coal fire burning.

Beyond that was what was called scullery in those days and a pantry where all the cooking etc was done. I never went beyond that point. The garden was long with grass near the house, then a hedge with vegetables behind. Grandfather was a keen vegetable grower. What I remember most vividly was the lunch where this large family, plus girlfriends and boyfriends sat around the big table, and grandfather standing at the head wearing his butchers apron and carving an enormous joint - quite something!

I was a baby when Pymmes Villas was destroyed by enemy action in World War Two. My parents had been staying there for Christmas and had left the previous day. As I became older, I wanted to know more about the house where I had so closely dodged death and where my grandmother had perished. Photos show she and I as looking remarkably alike, which made my need to know all the more poignant. At that time no candidate photos of the house had come to light, so none of the surviving members of my father's family could point to a photo and say, "That's it!". So identifying the house from the above photos became an obsession for me.

Cliff Raven generously did some research for me at Enfield Local Studies and Archives and came to the conclusion that 82 Silver Street was one of the houses in the first of the above photos. I doubted this for two reasons: One was that my cousin who was a young child at the time was certain that she remembered the house as one of those in the third photo; the other reason was that Eric Clarke's description made it clear that the house was on three floors, whereas the first photo seemed to show only two storey houses.

Cliff Raven turned out to be right. Enfield Local Studies and Archives generously posted me the electoral roll for that part of Silver Street for 1939, along with ordnance survey maps for the area for 1894, 1935 and 1959. There was a gap in house numbers between 54 and 64 Silver Street on the electoral roll which indicated to me a gap between houses - and which neatly fitted a gap on the 1935 map. This enabled me to count forward to 82. Also - fortuitously giving the same result for the location of number 82 - the 1901 census for that part of Silver Street stopped at number 92, so indicating a side road. After 92 came Somerset House then Somerset Road. So by counting the houses on the map it became clear that 82 Silver Street was a few houses along from the far end of the terraced houses in the first photo.

Support for this location came by email from Jacqueline Ames whose mother and aunt were old enough to remember the area before the bombing. They reported that the Clarke house that they knew was close to the corner of Gloucester Road, the road by the large tree in the first photo. I also learnt that the house did only have two storeys, but that the two bedrooms in the roof could have given the illusion from inside of three storeys.

The final confirmation came from Phyllis Money who was 94 at the time (2009) and who grew up in Edmonton. She knew nothing of my connection with my father's family, but when I showed her a printout of the first photo, she immediately volunteered, "I remember those houses. They were destroyed in the blitz and it was such a shame because the Clarkes, a very nice family, had only just moved in there from Warwick Road, and some of them were killed."

So that was enough for me. Why my cousin should have identified the set of houses in the last of the three photos, I cannot be sure, but I would imagine that a very young child would only have taken in the impressive size and long front garden of the house she saw, neither of which are particularly apparent from the photo. Furthermore, the houses in the third photo were already missing on the 1935 map, which meant that my cousin could never have known them. Furthermore, yet again, when I showed the photo of them to Phyllis Money, she said that she did not know those houses. A telephone exchange is now on their site.

So a long-standing personal obsession has finally been put to rest.

Another type of large family house 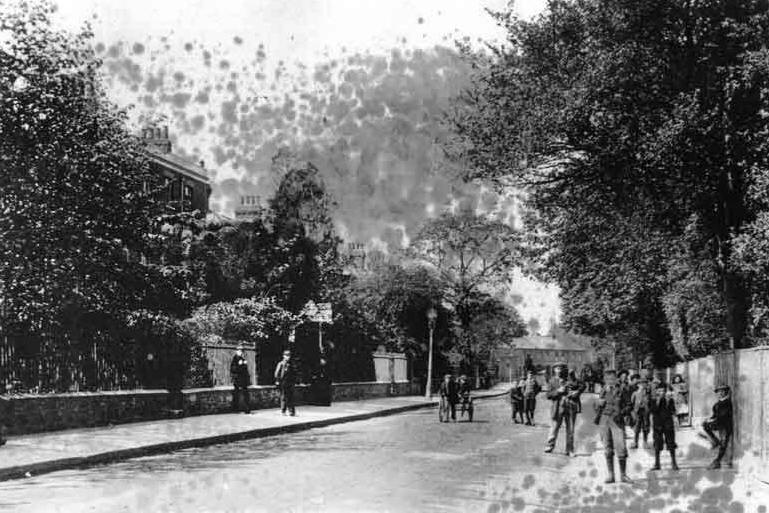 A set of large terrace houses of a different style further along Silver Street, away from the hospital and towards the station. Photo courtesy of Enfield Local Studies and Archives via Cliff Raven. 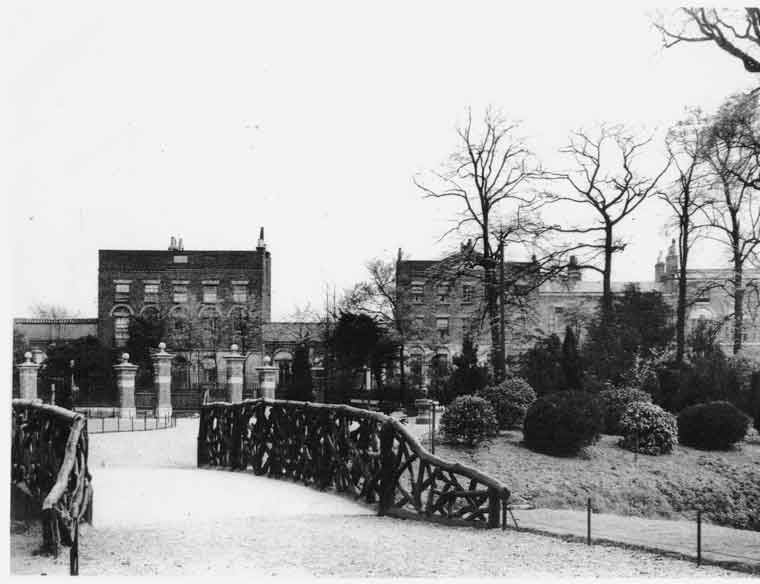