Then and now photos of old Edmonton UK

This page shows a set of comparison photographs, comparing the early 1900s photographs on this website with more recent ones (2009) taken from the same vantage point. The page was started with contemporary photographs taken by John Cunningham whose help and interest I gratefully acknowledge. Note in particular:


THE FOLLOWING PHOTOS ENLARGE ON PINCH OUT

The corner of Silver Street and Bulwer Road, left in the early 1900s and right in 2009 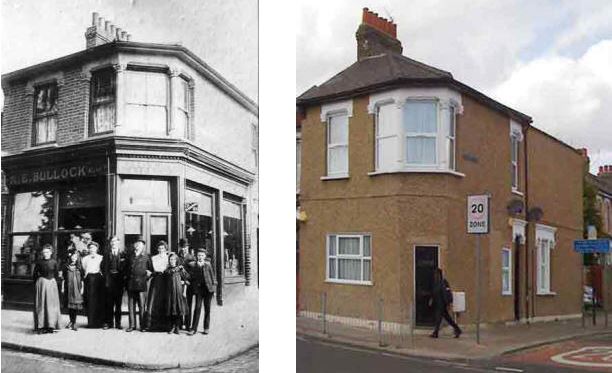 Left, the corner of Haselbury Road and Silver street in the early 1900s as a grocer's shop; and right, in 2009. Note that the chimney and the upstairs window are still the same. It is currently a young offenders half way house.

Above left, the old Bull Pub on the corner of Lopen Road and Silver Street which was demolished in 1904; and right, the 'new' Bull pub in 2009. This would have been the Bull pub that my mother knew - although without the cars outside and the satellite dish.

Left, Tanners End Mission, Bull Lane in the early 1900s; and right, today (2009). Note the blue notice above the main window: 'Tanners End Free Church' and the different railings / hedge. It also looks as if there have been replacement windows in the original openings.

Whereas most of the 'now' locations on this page are still recognisable as the 'then' locations of a century ago, the changes in the Pymmes Villas area are dramatic. Lyndsey Besemer who took the 'now' photograph has given the following explanation:

Part of Pymmes Park was taken away when the North Circular Road was widened, and this has changed the whole look of the area. Where the gates to the park were is now in Victoria Road. So it was difficult to gauge exactly where the 'then' photo was taken from. To take the 'now' photo, Lyndsey Besemer stood with the railings of Pymmes Park behind her on what is now the junction of Silver Street and Victoria Road.