Silver Street is significant for this website for several reasons:

• Silver Street formed (and still does form) the southern and east to west boundary of the estate of terraced houses which feature largely on this website.

• Silver Street was the shopping hub of the area which my mother describes in some detail. 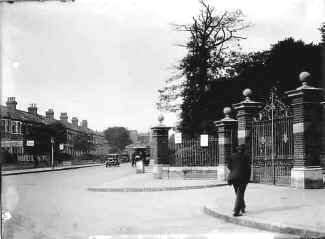 Silver Street, Edmonton, showing the entrance to Pymmes Park on the right 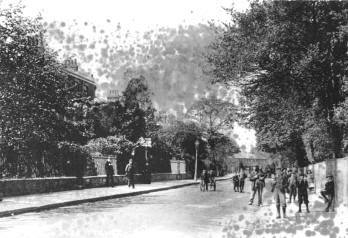 Another view of Silver Street, taken further back, showing Pymmes Villas, in 1935. They were destroyed in the Edmonton blitz of World War Two in 1940.

The shops in old Silver Street

The first block of six shops in the photo was built before 1894 and was by Warwick Road and Sheldon Road (out of sight down to the left). These shops are shown on the ordinance map of that year. 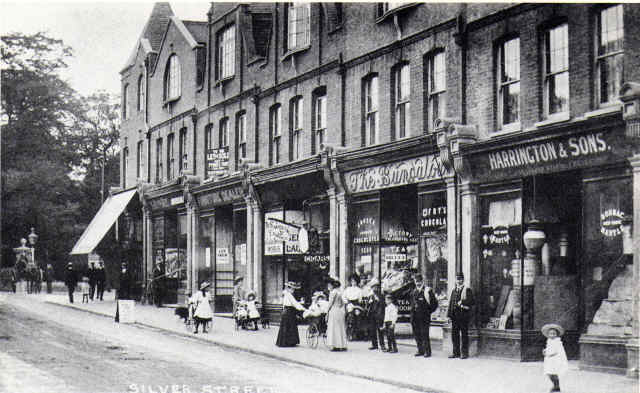 Silver Street, 1905. The globes on top of a column at the entrance to Pymmes Park can just be seen in the distance.

If travelling in an easterly to westerly direction, the Gibralter Fuller cycle works on the corner of Sweet Briar Walk would be the first shop on the estate. (This runs south/north.)

From there you would have seen as you do now (2009), the back gardens of the Warwick Road houses.

On the other corner is the oil shop. The shop is now (May 2009) a fish and chip outlet.

The next shop along was, at about this time in history, the Roths Haberdashery. All this building line remains the same today (2009) and just beyond the lamppost on the left and not quite discernible is the Co-op building on top of which is a brick facia giving the time of building. I think, it was built around 1902 or just a little earlier. These first six shops are still with us, five have completely changed with new aluminium shop fronts but the one on the nearest corner of Warwick is a pet and grain store which still retains the tongue and groove wall boards on the inside. Alas, though, this shop front had a car smash into it and the owner had to have the original Victorian door and windows replaced with modern fitting. 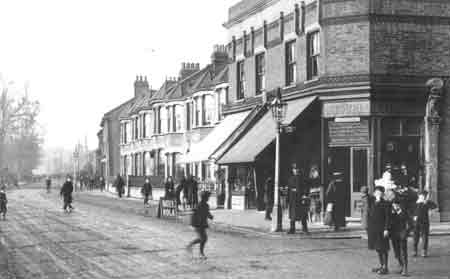 In the distant mist you can just see the spire of St Aldhelms Church which was built 1903, and to its left, again through the mist, you may be able to make out the three storey Silver Street School which was built in 1900.

At that point would be the far west of the estate with roads running south to north: Millfield Road and Windmill Road - houses built prior to 1894. The closer buildings jutting out are Myrtle Villas and four cottages built 1870. Out of site just here would have been the Bull public house in Lopen Road, built about 1904.

By the lampost and where the group of children have crossed is Bulwer Road which also runs south to north. The houses here were about built 1898. The terrace of bay windowed houses would again have been built around this time. The clear jutting out properties are two shops and these form one corner of Haselbury. I believe that one of the German bakers was here. It later became a greengrocers. At the Bulwer Road corner the two shops in the photo still exist (2009) but the old butchers is now a pet store and the other shop is a Caribbean takeaway.

The Two Brewers Pub was opposite.

The pub in old Silver Street 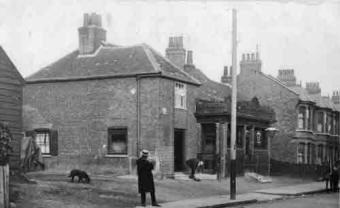 Photo is courtesy of Cliff Raven*

This building was demolished in 1904 and a new Bull Pub was erected on the adjacent yard, the site where the dog is. Three house were also erected on the site vacated by this demolition, and the Lopen Road was opened to the left where the clapboard building is. So the photo does not show the old Bull pub of the early 1900s recollections.

The dip in the road under Silver Street railway bridge

When the first double-decker bus drove under the Silver Street railway bridge, its roof was torn off. So a depression was made in the road. It used to fill up with water which seriously caught out cars not realising how deep the water was.


Tap/click an image to enlarge

Two photos showing the almost annual flooding under Silver Street railway bridge, about 1920, both courtesy of Tony Curnock. Note the plank between the buses and the pavement so that passengers did not get their feet wet.

Around 1960 repairs were being made to the steeple of St Aldhelm's Church at the junction between Silver Street and Windmill Road, and I had the opportunity to climb to the top of the scaffolding where I took the following pictures. They are probably unique.

Tap/click an image to enlarge 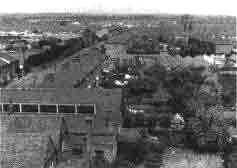 Looking north along Windmill Road. St Aldhelm's Church hall is on the left. For a labelling of the significant features of the area, including the Edmonton windmill, see Richard Cole's annotations below. 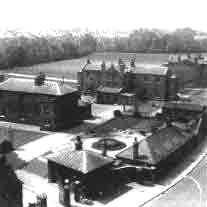 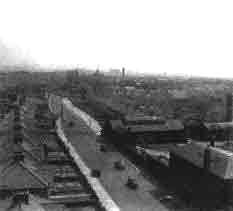 Looking east down Silver Street: On the right is the corner of St. David's Hospital.

Annotations of the first aerial photo

The following annotations are courtesy of Richard Cole. 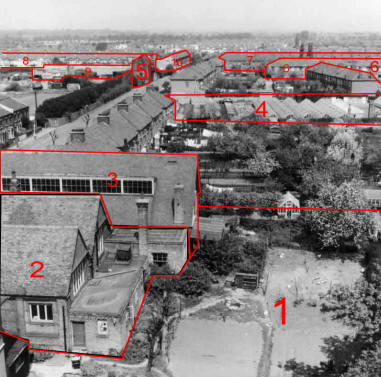 2. St Aldhelm's Old church hall (which was heated by free-standing coke-burning stoves, which I am sure emitted carbon monoxide: every time that I went to Sunday School as a child I returned home with a splitting headache). It has a memorial window to the 2nd Edmonton Scouts who fell in the Second World War.

5. The remains of the Windmill. This must have been a storage building rather than the windmill itself.

9. The very new ambulance station, built in the late 1950s on the site of the old nursery surrounding the windmill. The southern half of the nursery site has been taken over as playing fields for the Aylward school, now the Aylward Academy, named after Gladys Aylwood, a missionary to China, who lived in Cheddington Road, Harrington Terrace, the westernmost edge of the Huxley estate.

* These photos and commentaries are from Cliff Raven, based on his research at Enfield Local Studies and Archives.
(Old Edmonton is now Enfield.)