When I was growing up in the 1940s and 50s it was common on any journey to be confronted by a huge cylindrical edifice looming up out of the distance.

It was so massive that anyone born after 1960 would - if it were possible for them to see it - be forgiven for thinking that aliens had landed! It was called a 'gasometer', pronounced with the stress on the 'om' (like in 'Tom'). There were lots of gasometers around; now empty shells can occassionally be seen.

Medium-sized working, gasometer expanded with coal gas from a gasworks in the first part of the 20th century, courtesy of John Cronin. 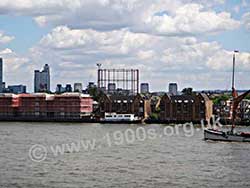 View across the Thames at London docklands showing the shell of an old gasometer, 2014.

A gasometer was a huge cylindrical metal storage tank for gas located at what was called a 'gasworks' - a factory to produce gas from coal. All London gasworks had to be near a railway line as the coal had to be transported from the northern coal mines.

I was taken on a school trip to the local gasworks at the bottom of Angel Road Edmonton. I must have been about 12 years old at the time. Because the gas works burnt coal to release the gas, the result was known as 'coal gas' or 'town gas'. It could not be produced on demand, so had to be stored to meet the demand at peak times. Hence the need for gasometers.

The massive metal storage tank of the gasometer had smaller cylindrical tanks fitted inside, rather like the sections of a telescope. As the gas was pumped in, these tanks expanded, rising into the sky and rotating slightly in the process. Rubber gaskets sealed the sections.

With demand for gas during the day, mainly from industry, the gasometer slowly and visibly decreased in height. At night the main usage was for street lights. Before electric lights, gas was also used for lighting in homes, pubs and theatres. Some houses had gas fires.

Most districts had gasworks. They never stopped production, 24 hours a day 7 days a week, up until the 1960s.

My mother mentioned nothing about gasometers in her written recollections of her childhood in the early 1900s, but they must have existed then because records date some of them to the late 1800s. They certainly featured in my own childhood in north London where the local gasometer was close to Canons Park Tube station, at the cross-roads of Whitchurch Lane, Marsh Lane, Honeypot Lane and Wemborough Road. I understand that this is currently the grounds of Whitchurch Middle School.

During a German air raid in World War Two, a bomb went through the top of one of the gasometers in the gasworks along Angel Road, Edmonton, about a mile due east of us. As you can imagine, the flames shot several hundreds of feet up into the air. Quite a sight!

Coal gas was poisonous, but it did have a characteristic smell so there was always warning of it escaping gas for anyone in a fit state to notice. Yet there were accidents and many an old film shows murders being committed by turning on a gas fire without lighting it, so letting the gas into the room. Also 'putting one's head in the gas oven' was the most widely known method of suicide because gas ovens were so widespread. It was a simple matter to turn on the gas without lighting it.

On the other hand, just outside gas works, escaping gas had mixed with the air and was no longer poisonous. (The carbon monoxide had taken oxygen from the air to become carbon dioxide.) However the fumes from the burn remained, making the area have a characteristic pungent smell. Some doctors thought this health-giving for the lungs, as the following examples show. 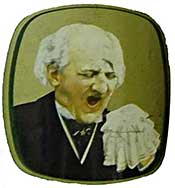 When I was a small boy in the Guildford area in the 1950s I had asthma and the remedy that the doctor prescribed for me was to be taken to a gasworks to inhale the fumes. My mother duly took me once a week on the bus to Guildford gasworks where we were allowed to wander freely around, breathing in the 'health giving fumes'. Perhaps surprisingly I survived! Oh, and I now rarely have asthma attacks, so perhaps the cure worked!

Years ago a woman told me that when she was a child, a natural healer cured her of pneumonia by giving her kerosene to breathe.

Kerosene is another name for paraffin, also known in the past as lamp oil and coal oil. It has a characteristic pungent smell. Perhaps what was really regarded as healthy for lungs was breathing in pungent fumes of almost any source.

Natural gas, North Sea gas and the end of gas works and gasometers

In the early 1960s 'natural gas', also known as 'North Sea gas', replaced coal gas. So gasometers and their associated gas works became redundant. Over time they were largely taken down and sold for scrap. The shells of a few remain, like one near Farnham which I photographed recently and which was small for its type. The metal struts give some idea of how large it must have been when it was inflated.

One of the widely publicised advantages of natural gas was that it wasn't poisonous like coal gas - although of course incomplete combustion did produce the poisonous carbon monoxide. Before the advent of natural gas 'putting one's head in the gas oven' (without lighting the gas) seemed to be the most common suicide method.

Conversion of appliances from coal gas to natural gas

Appliances which worked on coal gas had to be converted to use natural gas. Many a family in our street complained that the oven conversions didn't work properly, and they were supplied with new ovens free. That wasn't in my mother's nature, and she always complained that her oven didn't work as well after conversion.