When policemen and police boxes were on the streets

The reason that we saw policemen so often was that the walked to street, to spot crime and to be available to the public. This was called 'walking the beat'. 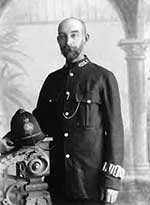 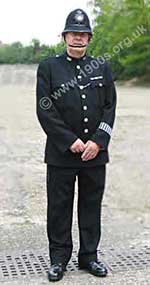 What the beat was

The 'beat' consisted of a section of local streets. Each constable was allocated his own beat which he was required to patrol on a regular timed sequence. The duty Police Sergeant would then meet up with him from time to time, to check that the he was doing his duty.

Policemen walked alone rather than in pairs. At signs of trouble they could call for help either by blowing their whistle or by using a police box. They did not have personal radios at that time.

These policemen were well-known in the local community. They knew the families and the families knew and trusted them.

Even when I was a child, much later in the 1940s, if I was travelling with my mother and we were uncertain of directions, there was always a policeman to ask.

Discipline on the beat

When I was a constable in a Welsh borough in the 1950s, we walked the beat on our own, and it was a disciplinary offence to gossip with another officer. I was fined 2s.6d* for talking to another officer at 4.30am across the street in an empty town centre.

Charles Nunn, as reported in Letters in The Daily Telegraph

*Although 2s.6d formally converts to only 12½p, in real terms it was a significant amount of money.

A true story of no lavatory on the beat

On night patrol, a policeman needed to relieve himself, and so went off beat down an alleyway, and while so engaged noticed a man breaking into a local property. He then waited for the man to come out, and promptly nicked (arrested) him. The policeman was of course praised for this arrest. However the sergeant wanted to know why the arrest took place off of the policeman's beat. The reply was that having seen the man acting suspiciously the policeman had followed him to the scene of the crime.

as told by the policeman to Iris and Mark Bailey

If a policeman on the beat needed help from other policemen, one thing he could do was to blow his whistle. That other policemen were likely to be near enough to hear the whistle bears witness to how many policeman there were on the streets! 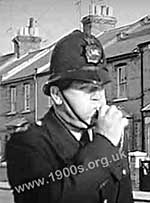 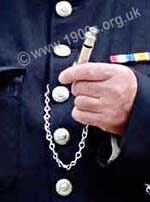 The following information about policemen's whistles comes from people who knew older policemen, but there is not much agreement about the sound of police whistles or how policemen used them. I suspect that practices differed in different parts of the country and over time. This is supported in the last contribution which states explicitly that the police whistle concerned is the Acme.

The sound of a police whistle

Police whistles were twin-toned, like two whistles in one - which was what gave them their distinctive sound. It was illegal for the public to own them. (Before the police had whistles, the 'peelers', as they were called, would whack their truncheons on the pavement to summon back up.)


Police whistles had a particularly deep tone which was quite unlike any other kind of whistle. Although it was illegal for members of the public to them, similar whistles, albeit with a slightly different tone were available, and were acquired by more than one old lady just in case! (A sort of fore runner of the modern personal alarm.)


Officers could attract each other by one long and three short blasts on their Acme police whistle.

On the end of their whistle chain was the key to a police box.

A common sight on the streets of Britain while I was growing up in the 1940s and 1950s were phones specifically for the use of police. They were in blue boxes, known as 'police boxes'. I understand that there were other types of police box, but the only ones that I ever saw were the blue ones and they are what this section is about. 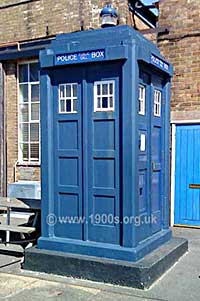 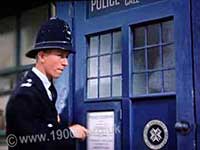 Policeman about to enter a police box, detail of a screen shot from an old film. 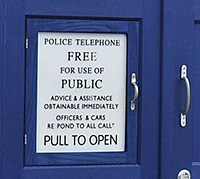 The small door to the public phone in police box 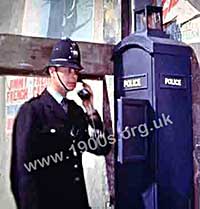 A similar phone door, open, in another style of police box, detail of a screen shot from an old film.

Why Dr Who's Tardis looks like a police box

In the beginning of the Dr Who series in the early 1960s, it made a great deal of sense for Dr Who's Tardis to look like a police box.

Police boxes were common on the streets so never attracted attention, and everyone knew that they were locked so they wouldn't be able to get inside even if they tried.

Although police boxes are long gone on the streets, the shape of the Tardis has become a tradition. So the Tardis continues to look like an old police box.

Inside a police box

Each box was equipped with a small desk, stool, first-aid kit and telephone. There was no heating, but the box was sturdy enough to withstand all weather and minor bomb blasts. it could be used to write reports, shelter, eat refreshments and detain a prisoner.


How the police used police boxes

When police officers walked the beat, they were often many miles from their station. Twice during their shift they were required to 'make a ring' by calling a predetermined box.


If a subject was to be detained, he could be shut in the box until transport was summoned.


The white light on top of the box would be set to flash if the station needed to contact the officer on that beat or any passing police vehicle.


Before the days or personal radios, the only way to contact the on-duty policeman was to ring a box and hope that he was nearby.

How the public could use police boxes

The end of police boxes

Personal radios for the police heralded the end of police boxes.

The last police box to be removed was in the 1970s at Cockfoster, the most northerly of the London suburbs.