Elastic giving way in public: a common occurrence in the past

Until man-made fibres came in sometime during the 1950s, it was quite normal for women's knickers and half-slips and boys' socks to be held up with elastic. With women's underwear, the elastic was threaded through the hem of a waistband and secured together at its ends. It was not sewn onto or into the fabric itself as is usual today. For boys' socks it was secured at its ends into a loop and held under the top of a turned-over sock to keep the sock up.

In use, elastic came unsewn or unknotted after a time, and it happened suddenly and unexpectedly, leaving nothing to hold up the knickers, half-slips or socks. 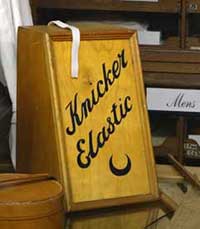 What to do when underwear elastic came undone

If a girl or woman was sitting down at the time, and felt the elastic 'go', the knickers or half-slip could be hitched up for a time by holding through the top clothes. If not, the item of underwear simply dropped around the ankles in full view of everyone. Every girl and woman at the time experienced this at some point, and every boy and man at the time must have seen this happen, even though the polite thing to do was to avert the eyes and say nothing - certainly never to laugh.

When it happened, there was nothing for the girl or woman to do but to stoop, step out of the item and pick it up. I am told that this even happened to my school headmistress during school assembly - a story never to be forgotten by the girls who saw it, although it was before my time.

Of course, this use of elastic meant that new elastic could easily be threaded through, so that the item readily became useable again - something that cannot happen today's elastic woven into the fabric. So it fitted the 'make do and mend' society. Today items have to be thrown away when the integrated elastic loses its strength.

What to do when sock garters came apart

Elastic loops round the tops of socks and hidden by the turn-over of the tops were known as garters. Every boy had them; girls seemed to have shorter socks which didn't need garters. With small boys for whom it was the fashion to wear short trousers, the resulting rumpled socks round their ankles looked most ungainly. Ungainly, yes, but not embarrassing as was the case of knickers and petticoats falling down.

Often garters were just quickly replaced by knotting together the ends of a new length of elastic - which, of course, showed as a lump behind the sock. The ends were sewn together for a flat, more refined appearance.