Insummer, the water cart would go round the streets. Imagination or not, summers seemed warmer and drier when I was a child in the early 1900s. The roads were different then with horse-drawn carts, and there was more dust around.

So in the hot summers, the water cart was very welcome. It was a horse-drawn cart that carried water. Along the back was a perforated rod that sprayed the water onto the road. 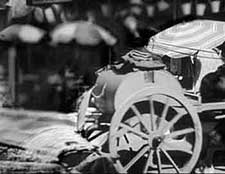 A water cart in the early 20th century. Note the water being sprayed onto the road behind.

We children would try to run into the spray without getting wet. How we laughed! When the driver heard us he would crack his whip over his shoulder, not to hurt us but to fob us off - but we always came back for more.

What I really liked about gypsies was their caravans which were very picturesque and colourful. They were horse-drawn and would travel miles. 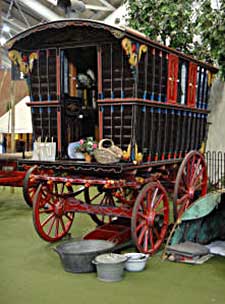 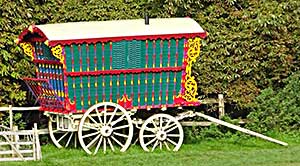 A typically brightly coloured restored gypsy caravan photographed at Weald and Downland Open Air Museum. The shafts show that it was clearly designed to be horse-drawn.

We children were discouraged from talking to gypsies, though. No doubt they were harmless but they were like a race apart.

I clearly remember brightly coloured horse-drawn gypsy caravans like this on the streets from my own childhood in the 1940s.

The roads were not tarmac but flints or stone broken into pieces by men in the workhouses and casual wards, thrown down by workmen with spades, and then sprayed with tar. Then the steam roller would come along to crush the stones to make a flat surface. It wasn't long, though, before the stones worked their way up. Young children often fell over on the roads and got nasty cuts. In fact most young children had scabs on their knees as a matter of course.

The road sweeper was employed by the Urban District Council. He had a large broom, a shovel on a long handle and a small cart to put the rubbish into. He wouldn't just sweep the roads, he would also sweep the gutters - not that I recall ever seeing much rubbish in them. Everyone seemed to act responsibly about not leaving rubbish around. The road sweepings were mainly silt which, if not cleared, would run into the drains when it rained and block them. This silt had its uses. When my father was rooting plant cuttings, he would collect the silt, make a mound of it and peg the cuttings into it. Pavements were always swept by householders, and it was a matter of pride to keep the pavement outside one's own house clean and tidy. This was even the case when it snowed. Householders were expected to clear it; it was not regarded as the council's problem.

The telegraph boy would bring the telegrams. He had a uniform of red and he wore a pill-box hat. He rode about on a red bicycle. Just the sight of him would be looked on with apprehension, particularly during the 1914-18 war because it probably signalled that a young man in the family had been killed in action.


The Messenger of Death

My first job, age 15, in 1952 was as a telegraph boy. The job was informally known as the Messenger of Death. I suppose this was a hangover from the war when telegrams told of war casualties.