All the adult inmates of workhouses had to work to fund their keep. The men and the women had different work.

Men's work in the workhouse

Men in the workhouse who were able-bodied had to work at hard manual labour. This was certainly unpleasant, but it was not primarily a punishment. These jobs had to be done and there were no machines to do them. However, workhouse life was not intended to be pleasant.

One job was to tease out the strands of worn-out rope from ships, so that the fibres could be used for other purposes. A tool like a large nail was used. I assume it was called a spike which must have given rise to the informal name of 'spikes' for the associated casual wards where the work was similar. The ropes were tarred, and therefore gritty, so made fingers bleed. 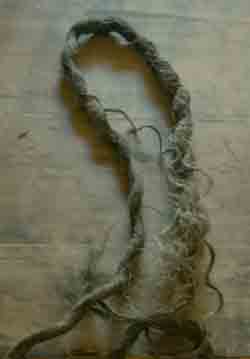 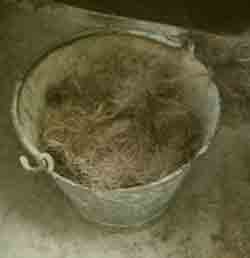 Bucket of teased out rope fibres

Another job was to break up rocks for building and mending roads.

The main task of male inmates at the Edmonton workhouse

The main task at the Edmonton workhouse was stone breaking - breaking up lumps of granite into knobs, about 1½ inches across, which were used in making macadam roads. Macadam was these knobs, set in sand and compacted by rolling. The district was fast developing in the early 1900s - and there was a large demand for this material.

Family notes, left by Edward Cole, son of the Edmonton labour master, nephew of its Chairman of the Board of Guardians and brother of the author of this page 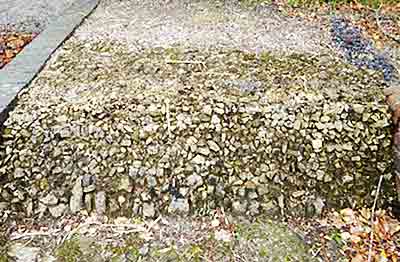 Section through a reconstruction of an early 1900s road at Amberley Heritage Museum, showing crushed rocks 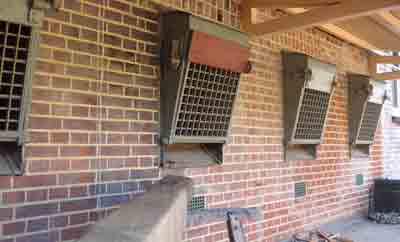 
My father had a large hammer in our shed at home which came from the workhouse. It was very heavy indeed.

The pieces of rock had to be small enough to go through a 1½ inch heavy-weight sieve - just under 4 cm.

Women's work in the workhouse

The women in the workhouses had to work very hard too.

The women had to wash everything that needed washing. At Edmonton, they did this in the infirmary laundry.

There were no washing machines or washing powders. So the women had to use their bare hands, carbolic soap, washboards, mangles and flat irons. It was hot, steamy work. I often wondered if they had any treats, as the men had their tobacco. 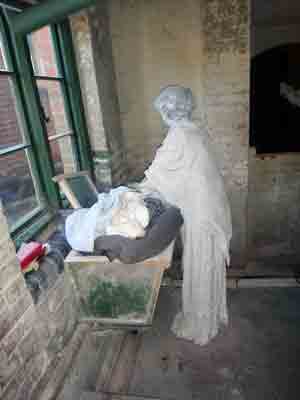 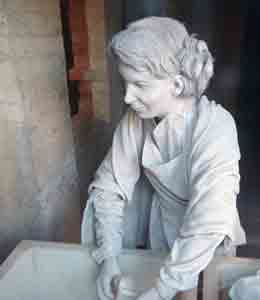 The models at Guildford Spike are full-sized and seem to be made of white unpainted plaster, which is particularly effective for the circumstances.

It also fell to the women to do whatever mending was necessary and to prepare and cook the meals - basic as these were.

---
All the photos on his page, with the exception of the crushed road stones, were taken with permission at The Guildford Spike.