What is a tenement?

Does the word 'tenement' tend, for you, to conjure up images of bygone city slums? Even some dictionary definitions confirm this:

Tenement: A run-down and often overcrowded apartment house, especially in a poor section of a large city. (Dictionary.com)

If you are English you are probably fully prepared to accept this definition because in most parts of England, tenements are simply best-forgotten history. Few if any towns still exist in England which have tenements because, where they once existed, they really were run-down. They have since been demolished and built over.

Yet I have friends who grew up in Scottish tenements who fiercely deny that they lived in slums. By today's standards their accommodation may have been less than ideal, but it was certainly on a par with living accommodation elsewhere at the time.

So what is or was a tenement and what was a slum tenement?

This section gives descriptions, rather than definitions. They come from people who grew up in the better tenements in Scotland in or around the 1940s. However, Scotland did have its slums, and the contribution at the end of the page describes some of the main differences between its slum tenements and the more up-market ones. It leads me to a final conclusion about slum tenements in England. That, too, is at the end of the page.

The unique feature of tenements: the tenement close

In Edinburgh, where I grew up, a tenement was a block of several living quarters which always had an open area in the centre called a close with stairs winding up round it to the upper levels. It was built in 1899.

I seem to remember old American films illustrating this geometry of tenement design. There were shots of stairways winding up and away into a distant roof, rather like a coiled spring except that the 'coils' were rectangular. 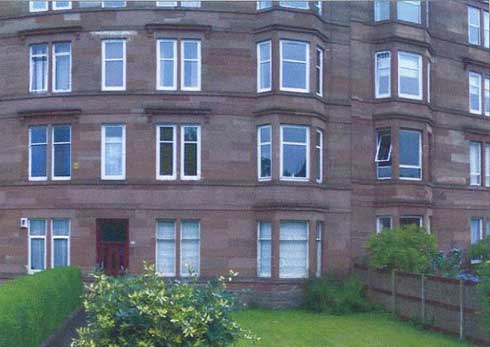 In Glasgow where I grew up, tenements had between two and six flats on each of their several stories. The upper levels were only accessible by an internal stairway from the close.

To stress the difference between these tenements and standard blocks of flats, the tenement geometry would have made it impossible for there to be lift access, even if it had ever been envisaged.

Each close was accessed from the street by a single door. In older, poorer tenements, this was just an open doorway.

There were up to eight closes to each tenement block.

In the better areas there would be just two flats to a close, one on either side of the close. In poorer areas there were up to six flats at each level.

Cothes washing facilities in every close

Each close had a back yard, necessarily at ground level, with a common washhouse (sink and coal-fired boiler). There were large garbage bins which were emptied weekly and poles to run clothes lines for drying the wash.

This was for every close, irrespective of whether it was in a better or poorer tenement. See my final contribution for the facilities in the closes of poorer tenements.

I can only speak of the better tenement flats which I knew as a child:

The flats had one or two bedrooms, a front room which was mainly used for visitors, a bathroom and kitchen/living room. The front glass paned door had full height shutters to close off for when the flat was unoccupied. It opened into a hallway about 7 feet by 12 feet, with several cupboards of various sizes.

The living rooms and front rooms also had cupboards and some had a bed recess with a wooden rail to hang a curtain on for privacy.

Even before the Second World War, my grandparents' flat had some electricity and gas lighting. Heating was with coal fires. The widespread use of these coal fires produced pea-soup fogs whenever there was little wind and the humidity was high. They also produced black deposits on all outside walls. These were blasted clean sometime after 1970 when only smokeless fuel was allowed to be burned.

The front gardens were just for ground floor flats. There was a low perimeter wall which had cast iron ornamental railings until 1940 when they were removed for the war effort. 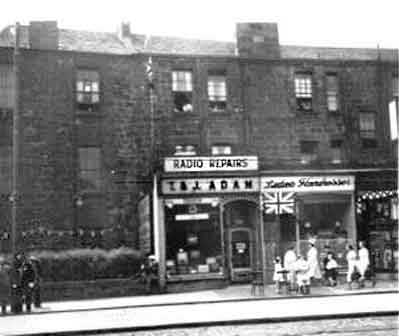 Shops built into the ground floor of an older tenement block in 1952. Photograph courtesy of Douglas Adam whose grandfather owned the radio repair shop. The flags were in anticipation of a royalty procession.

The above descriptions clearly show what upmarket Scottish tenements were like and it would probably be fair to imagine English slum tenements as older, run-down and damp versions with inadequate sanitation and ventilation, with more flats on each level and more families packed into smaller spaces.

Yet Scotland did have its slum tenements. The following contribution sheds particular light on why Victorian and old 20th Century tenements were slums.

Facilities in Scotland's poorer slum tenements and probably English ones

Although my family's more upmarket tenement flat had its own washing and lavatory facilities, I understand that Glasgow's slum tenement flats were not so fortunate. Instead there was a single communal lavatory on each of the landings between the levels, serving around six or so flats each occupied by large families.

I understand that there was a galvanized sit-down bath in the back yard of each close which had to be filled from jugs or buckets of water from the kitchen sink. It was the only bath that the tenement residents could use - although Glasgow did have public wash-houses and baths around the city. The really poor, however, would not have been able to afford to use them.