The daily grind for tramps and vagrants

Arrival at a casual ward and being booked in

I would see the men and occasionally women start arriving at our Edmonton casual ward in the late afternoon, every day of the week including weekends. They were not immediately let in so there would be a crowd of them, lining up or sitting on the pavement outside.

On entry, the tramps had to have their personal details entered into a book. Then their clothes and possessions were taken from them to be fumigated. Note fumigated, not washed. It is doubtful whether such rags would have stood up to being washed or could ever be got clean.

The real locations of Romton and Edbury in George Orwell's account

Orwell writes that he first frequented a casual ward in 'Romton' and then one in 'Edbury'. After some scrabbling around on the internet and some map work, on the basis of times and distances, I am reasonably sure that these were Romford and Edmonton. A later Introduction to the book confirms that the publishers insisted that certain names were changed.

Experiences of arriving at a casual ward as a vagrant

At about a quarter to six, I arrived at the Edbury [Edmonton] spike where there was already a queue waiting. They were a disgusting sight, nothing villainous or dangerous, but graceless, mangy, ragged and palpably underfed. Sometime after six, the gates opened.

In the yard was an office where an official wrote down in a book our names, trades, ages and where we were coming from and going to - this last is intended to keep track on the movements of tramps. No tramp may enter any one spike, or any two London spikes, more than once in a month on pain of being confined for a week. The official also asked if we had any money because it is against the law to enter a spike with more than eightpence. Everyone said 'no' although it is normal practice to smuggle money in.

We were led into the spike by the 'tramp major' who is generally a pauper from the workhouse, a great, bawling ruffian in a blue uniform.

The Edbury [Edmonton] spike did not differ much from the one at Romton [Romford], although all spikes are slightly different. The worst feature was that all tobacco was confiscated at the gate.

The tramps then had to take a bath.

The scene in the casual ward bathroom was extraordinarily repulsive. Fifty dirty, stark-naked men elbowing each other in a room twenty feet square, with only two bath-tubs and two slimy roller towels between them all. I shall never forget the reek of dirty feet. They all washed their faces and feet and the horrid greasy little clouts known as toe-rags which they blind round their toes because their boots are worn through so much walking and probably never fitted properly anyway.

When we had finished bathing, the official tied our clothes in bundles and gave us workhouse shirts - grey cotton things of doubtful cleanliness, like abbreviated nightgowns.

After the bath, the men were then given a very basic meal. I understand that this was usually just bread and soup with a cup of tea.

The tramp major brought our supper from the workhouse. Each man's ration was half-pound wedge of bread smeared with margarine and a pint of weak tea at Edmonton and bitter sugarless cocoa in a tin billy at Romton.


Bed in a locked cell

Next, the tramps were led to one of the many cells, which to all intents and purposes were prison cells. Because the tramps were regarded as felons, the cells had heavy wooden doors and which locked on the outside. 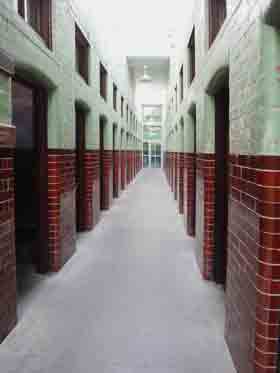 The main corridor showing the doors of the cells. 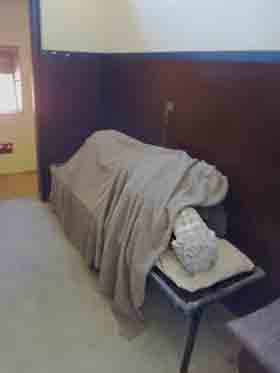 Inside a cell, showing the narrow bed and the individual work area leading off. 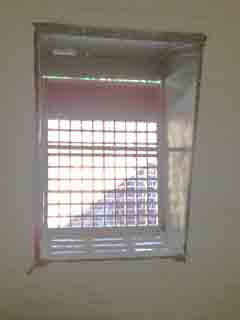 The barred cell window. The square bars also served as a sieve for sizing rock-breaking work. 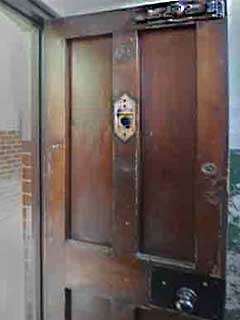 The heavy door to a cell with its heavy outside lock.


Note the huge bolt at the top and its peep hole to let the tramp major keep an eye on the man inside. This was covered in mesh to present the vagrant from poking a finger into the tramp major's eye.

Each cell had its own small work area with a barred window and a bucket to serve as a lavatory.

The cells were unlocked at eight the next morning.

Once the cell doors were opened, the passage was full of grey-shirted figures, chamber pot in hand, scrabbling for the bathroom, where there was only one tub for the lot of us. I took one glance at the black scum floating in the water and went unwashed.

Breakfast was identical to the previous evening's supper.

The work for the tramps' keep

In return for the charity of the casual ward, the vagrants to do some work. Clearly this work differed from one casual ward to another. The work in the Edmonton was hard manual labour as described on another page. Yet what George Orwell describes is significantly less arduous:

Our clothes were returned to us and we were ordered out into the yard to work. This was peeling potatoes for the dinner of the paupers in the workhouse.

A rather meaningless medical check

A doctor turned up at about 10 o'clock. We had to strip and stand in the passage for inspection. You cannot conceive what ruinous, degenerate curs we looked. A tramp's clothes are bad, but they conceal worse things - every kind of physical rottenness was there. Nearly everyone was under-nourished, and clearly some were diseased - but the inspection was designed only to detect smallpox, and took no notice of our general condition. The doctor examined one tramp's rash and just said that it was due to under-nourishment - for which nothing was offered or done.

After the inspection, our possessions were returned to us and we were sent on our way with a meal ticket worth sixpence for lunch. These could be redeemed at certain named coffee-shops. Mine was later redeemed for four slices of bread and dripping.