There was no shortage of extremely poor families in the early 1900s. Some families were in perpetual poverty which they could not get out of, try as the might, even when the man, the wage earner, was in full-time work. 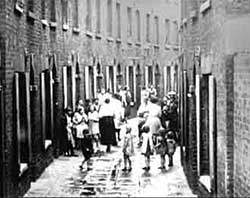 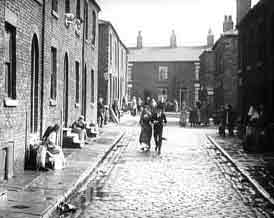 The main sources for this page come from the book, 'Round About a Pound a Week' which records the findings of a group of women who interviewed families of manual workers in Lambeth, London, in 1909-1913 under the auspices of the Fabian Society.

The aim of the study was to look at how these poor families managed financially. (The findings were hugely influential for improving state support for families, but that is another story.)

The income of a slum family

The full-time work of the wage earner, i.e. the man, of a typical slum family, brought in about £1 a week in the poorer slums of London - hence the name of my source book. However the amount could not be relied on, as the men were frequently laid off without notice if there was no work. These men were not skivers.

The book never uses the term 'slum'. That is my interpretation from a modern perspective. Certainly the housing which the book describes no longer exists. Back in the early 1900s, it was what were known as 'tenements' which were already old and decrepid properties, in contrast to the then relatively new Victorian and Edwardian terraced housing estates, where my mother grew up and which are still giving good service today.

The rent for the accommodation was around 6 to 8 shillings a week for one or two rooms in fairly large tenement blocks. The book makes the point that as a proportion of family income, such rents were significantly higher than those where better off families lived. What was left over after paying rents left very little for the other necessities of life with absolutely nothing for bettering themselves.

The cheapest rooms were in basements which were always damp and never saw real daylight. They tended to be bug infested, and illness was rife.

Families lived in one or two rooms. Most families were large, which meant being creative with the space available. Babies tended to sleep with their parents and children slept two, three or more to a bed.

The women worked hard and the rooms were described as surprisingly clean in the circumstances.

The small incomes were spent on rent, funeral insurance, food and other necessities of life, but it was never enough. Disease and death were rampant. It is significant of the time that even in extreme poverty, funeral insurance was a priority.

Clothes people wore in the slums

Clothing was second-hand and repeatedly mended. It was normal to see children and even women without shoes.

No shoes for very poor children

When I had to visit Ireland on business in the 1960s, it was still common in the poorer parts to see children running around outside with no shoes.

No underwear for very poor children

My mother told me that right up until the 1960s boys from the old 'slummy' areas of Salford and Manchester wore knee-length shorts with no underpants in all weathers. During the war she bought underpants for the boys who were evacuated with her, but then saw them playing football out in the street wearing the underpants but no shorts. Apparently they didn't know what underpants were for and assumed they were football shorts.
Alison Tomlin

Why the slum families couldn't get out of their poverty

It is reasonable to wonder why these families, headed by men who worked hard and were prepared to work, did not move to other parts of London where work was better paid and the accommodation was in purpose built houses on new estates, like the Huxley estate where my mother grew up.

According to the book the main reasons were as follows: