It must be difficult for anyone born after the end of the 1950s to imagine what British fogs were like before then.

Fogs could be really dense. I remember them from my childhood, but they were common earlier in the century and in Victorian times. Then, and in my generation, they were widely known as 'pea soupers', presumably because of their likeness to pea soup. This may say something about the diets of people living in the 1800s and early 1900s, as I don't think that pea soup would be the first likeness that would come to mind for anyone today. 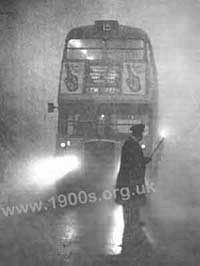 Lighting the way for a London bus in a fog, from an old newspaper cutting. 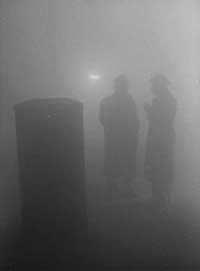 How I remember the fogs of the first half of the 20th century.

The second of the above photos appears on a number of websites, but no-one so far has responded to my queries about its copyright. If you own the copyright, please get in touch.

The origin of the term 'pea soup'

I believe that the 'pea soup' term probably refers to the ability of a good old thick pea soup to permit a spoon to stand up without falling over, hence 'As thick as pea soup'.

Why fogs were so bad

These fogs were a mixture of natural mist (water droplets) with smoke, soot and tar from countless chimneys. At that time almost all family homes were heated with coal fires, and factories and power stations worked from coal too. So a better word to describe the fogs would be 'smogs' although I don't ever remember hearing that word while I was growing up in the 1940s and 1950s. Smog is a contraction of the two words 'smoke' and 'fog' and was commonly used in the 1960s before the Clean Air Act.

A quotation from a Sherlock Holmes book from 1917 describes those old-style fogs well:

A contemporary description of on old fog

"... for the fourth [day] after pushing back our chairs from breakfast, we saw the greasy, heavy brown swirl still drifting past us and condensing in oily drops upon the window panes ..."

Being an industrial city, Glasgow where I grew up, had its share of pea soupers/smogs, as I well remember. The acrid taste of sulphur dioxide and sulphurous/sulphuric acid due to the sulphur which was present in many coals caused lung problems. The high humidity necessitated frequent nose blowing, and the amount of black particles in the mucous was unbelievable.

Being caught out in a bad fog could be dangerous. It was all too easy to lose one's way, because one street tended to look like any other, and buses could not see their way to run. At my school, the rule was that if a certain tree could not be seen from a certain window, then the school packed up for day to allow time for everyone to get home before it thickened as darkness fell.

Getting lost in a bad fog

The worst fog I remember was in the late 1950s. I was on my way back from the Washington Singer Laboratories in Exeter to my lodgings in Pinhoe. It was my custom to make this journey by bike every day, and that day was no exception as there had been no fog in the morning.

On the way back it was impossible to ride my bike because I couldn't see far enough ahead of me. I had to walk with the bike, guided by the kerb which I could just see. It was crucially important to keep a map in my head of where I was and this required a surprising amount of concentration as distances were difficult to judge. Had I, for example, arrived at a bend in the road? Or was it a turning into another road? Fortunately I did come across a few road signs which I could just read if they were close enough. It was all quite frightening, and the memory stays with me. Fortunately I did get back to my lodgings eventually, but it was a close thing.

Following trams because they 'knew the way'

Late one night in a bad fog on the last run of my shift as a London tram driver, my conductor and I got off the tram but heard a voice calling out from the car behind, "How long are you going to be waiting here?". I looked round to find him and had to say, "All night guv, you're in the depot!". It was common practice during smogs for motorists to follows trams which they knew were going their way, because the trams, being on rails, couldn't get lost. On this occasion, though, the motorist, simply hadn't been able to see that he had followed the tram too far.

Getting to work by car in a fog

My memorable fog experience happened in 1956 between the village of Rainhill Bridge where I lived and the Lea Green Colliery where I was an apprentice.

Although I had previously used public transport to get to work, my routine changed when Pat McAteer started work in the same workshop as me. He was a 1950s celebrity, the current British and Commonwealth Middle Weight boxing champion, and he had a modern Ford Zephyr/Zodiac luxury car as befitted a champion, Being such a great guy he used to give me a lift into work.

One particular morning the fog was extremely dense and he had had a snail's pace journey to get to me. In order to ensure that we would have a somewhat quicker onward journey, he suggested that I should volunteer to sit on the kerb-side mud guard of the car and shine a torch into the gutter ahead to give him a line to drive by. This I did and we arrived safely with me wearing his posh scarf which he provided me with to keep me from choking in the fog. How was that for consideration from a champion!

Ford Zephyr car showing the mudguards that Alan Hughes rode on to see the way in a fog.

Bus journeys in smogs depended on the clippy walking the entire route ahead of the bus (but not too far ahead) with a torch facing backwards for the driver to follow. Surprisingly the timetable was 'almost' maintained simply because at walking speed people could get on and off the bus without the need for the bus to even slow down. As well, the clippy knew the route by heart so could call out the name of the stop as the bus approached it. Naturally it was not unusual for other traffic to tag along close behind busses so they tended to be followed by a caterpillar of mixed traffic at matching walking speed and only a couple of feet apart.

Mind you, buses were not entirely trustworthy. There was the story which was probably true that a bus somehow found itself completely lost in a churchyard. It had to be left in place until the fog lifted and the bus driver could figure out how to get back out!

One foggy morning, I was sitting next to my mate who was driving our coal delivery. Suddenly a bus loomed into view ahead. I shouted to my mate and he slammed on the brakes.

I hit the driver's cabin the floor and our truck crumpled up.

Fortunately I had lifted my feet just in time and I was able to get to the door handle. As I did so, the door fell off.

I wasn't hurt too badly. There was a tear in my trouser at my left knee which was cut. The bus conductor, who had been looking out at the back of the bus, got thrown clear. I heard later that the bus driver had broken ribs, but I never found out what happened to the passengers.

I ran back to the coal yard for help and they sent along an empty lorry. Hurt as we were we had to tranship the load and go out and deliver it. It was 7 pm that night before we finished.

Quite apart from the problem of limiting visibility, fogs were extremely dirty, and they could last days if there was no wind. They were at their worst in winter when the air was naturally more damp, and coal fires were burning in every house. The extra hours of darkness made visibility worse, and the street lighting was much less effective.

My mother would take down the net curtains to wash after particularly bad fogs.

In December 1952, there was the 'Big Smog' in London. It was disgusting, evil smelling and greasy, and the world disappeared outside. We couldn't even see the gas street lights right outside the front gate.

I was 10 years old. There was going to be a concert at the hall attached to St Joseph's Church, Wealdstone, and I was determined I wasn't going to miss it, because I was doing a solo on the violin. My mother tried all types of persuasion to get me to stay at home, but to no avail. So off we went, hand in hand, trailing our fingers along the hedges and fences because we couldn't see where we were going. The silence was deathly because the fog muffled everything, and there was of course no traffic.

On turning the corner into Farmstead Road, we heard the voices of obviously young Jack the Lads coming along, one of them saying, "Don't know what all the fuss is about - it's only a bit of mist". However, the next thing that happened was that we heard the sound of someone walking slap bang into the pig bin! - and it tipping over and rolling around. This was immediately followed by a string of curses coming from the same lad, with screams of laughter coming from his mates.

My mother and I got as far as a shop called Toddlers on the corner of Whitefriars Drive and the High Street, and it was only then that I became really frightened. I told my mother that I didn't want to go any further - just to go home! My mother never actually said, "I told you so", but I could tell by the way she pulled me back home at great speed that she was fuming!!!!!! -

Oh! By the way. We found out later that the concert had been cancelled, which was hardly surprising in the circumstances.

The fogs were dangerous for old people and anyone with breathing difficulties. Such people had to stay indoors with doors and windows shut. Nevertheless the fog still managed to get in somehow. Deaths were always above average in times of severe fog.

The end of bad British smogs and fogs

So what happened in the late 1950 and early 1960s that made these fogs things of the past in the UK? In 1956 the Government passed the Clean Air Act which legislated for zones where smokeless fuels had to be burnt and which relocated power stations to rural areas. Later acts legislated still further against air pollutants. Of course it took time for these acts to come into effect.