The driver was set apart in his own front cubicle, separated from everyone else by a glass window. 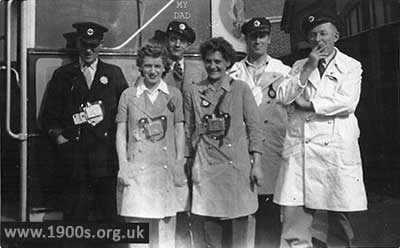 Bus drivers' Summer uniform and problems of washing it

My father, Walter Albert Partridge, was a bus driver working at the Forest Gate Depot in the late 1940s. The photo shows him with some of his mates, wearing his summer coat. Although it looks grey in the shadow of the photo, it was always a brilliant white which my mother was seriously proud of. He had two such coats which she made him change twice a week because the right sleeve tended to get grubby from him having to put his arm out of the window to do hand signalling. There were no indicators on the buses in those old days.

Bus drivers usually worked with the same conductors. My father's conductor was the guy in the black coat in the photo, but when it was his rest day, the woman next to him would take his place. All three are wearing the ticket machines which punched holes in passengers' tickets to show the fare stage where they had paid to get off.

Stopping and starting a bus

The skill of the drivers

It is tricky for a driver of today to drive these old buses because every gear change requires double de-clutching. It is a tribute to the skill of the old drivers that the passengers' rides were so smooth.

They stopped at bus stops and would start the bus again when they heard the conductor give a double ding on the bell.

Push button inside a bus requesting the bus driver to stop. Photographed at Brooklands Bus Museum

Although I understand that the famous Routemaster buses were developed in the 1950s, they did not come to Edgware, where I lived until the early 1960s.

I had assumed that the transmission was automatic, which had not been properly tuned because the journeys were punctuated with serious jolts as the engines changed gear. We passengers were repeatedly thrown violently all over the place. It couldn't be allowed to continue and fortunately it didn't for long.

According to Norman Partridge and Douglas Adam, the  transmission was not completely automatic - see the boxes below.

I'm fairly sure that the Routemasters had what is known as 'Pre-select transmission', and I recall my Dad saying that Pre-Select was a B****r to get used to.


With the pre-selector gearbox, nothing happens when the gearshift lever is actuated until the clutch is depressed. Only then is the gear automatically changed. If the engine speed (the gear) is outside the normal range for the vehicle's speed, a serious mis-match results in a forward or backward lurch.