The London Underground was always known as the 'tube'. The only compartments that I knew in the 1940s were full-length, seating perhaps 50 passengers. In many ways, they were much as they are today. However there were some significant differences:

The trains got very crowded at times. So passengers had to stand. As the ride could be jerky, there were grips and poles for them to hang onto. The grips consisted of dangling black balls that fitted neatly into the palms of hands. Perhaps they were unhygienic because they were later replaced by other designs. 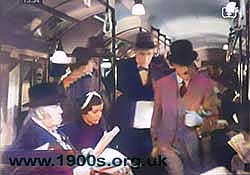 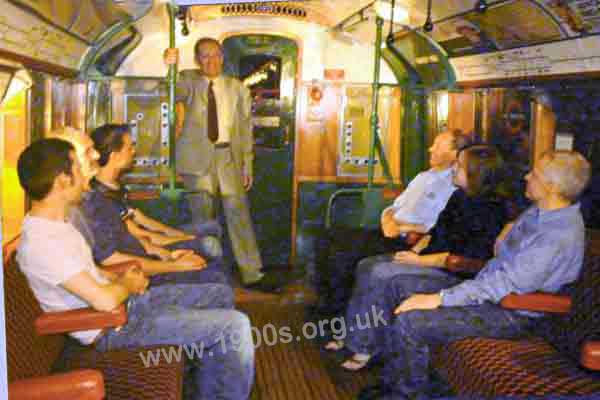 Inside an old tube train showing the hanging ball-style grips and a man gripping a support pole. Detail from a photograph in the London Transport Museum.

Judging from the clothes, the man holding the pole appears to be presenting to a much more recent audience.

Every compartment could, if necessary be placed at the back of the train and used for the guard. So the controls with their coloured buttons were plainly visible in every compartment, and were a great temptation for children to press. I was always told not to, but I suspect that many a child did press, so they were probably disabled unless a guard was actually there. 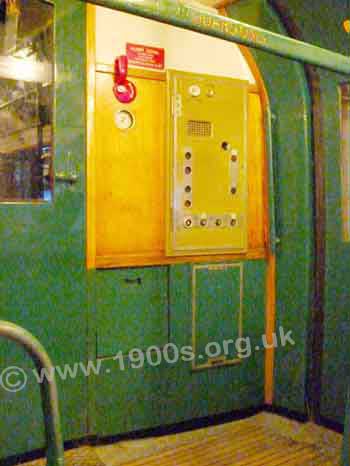 The controls for the guard, inside every tube compartment. Note the pull-down guard's seat, the red emergency stop handle and the wooden floor. Photographed in the London Transport Museum.

Beside the controls was a pull-down spring-loaded seat presumably for the guard but known as the 'emergency seat' when no guard was there. It was hard and uncomfortable with no arms, but as a child I enjoyed sitting in it - and was always allowed to do so.

The windows of the tube in wartime

I certainly didn't spend my wartime tube journeys looking out of the windows. Because it was wartime and London was in fear of German bombing, all the windows had milky-looking mesh netting stuck over them to stop glass splinters flying from bomb blast. I very much wish I had a photo, but no museum I have seen shows these windows. Probably when the war stopped, they were so rapidly and eagerly stripped that no-one bothered to photograph them.

More about the netting on the train windows

There were notices on trains about not peeling off netting:

Please do not peel the window netting. It is there for your protection.

Some graffiti added in response was:

Thank you for the information but I can't see the bloody station!