When I was growing up in 1940s and 1950s in the wider London area, every bus had a conductor as well as a driver.

Most of my recollections are of bus conductors being men, but during the Second World War war, they were often women because young and fit men were away on active service. These women were known as clippies.

Uniforms of bus conductors and clippies

London bus conductors and clippies had dark navy uniforms with peaked caps and they wore various badges. The uniforms of the few rural bus conductors who I saw were identical but in dark green.

Graham Burgess in authentic bus conductor kit - but without the hat 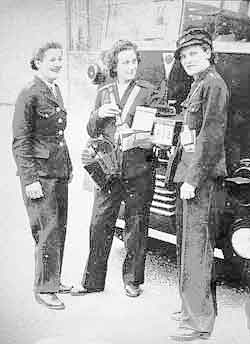 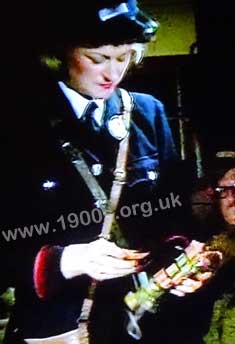 Identification of a London bus 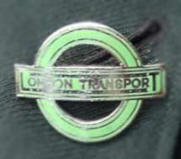 
The role of bus conductors

Bus conductors were in charge of their buses. They monitored safety and signalled to their driver when it was safe to drive off after a stop. In particular, they collected passengers' fares, i.e. they sold the bus tickets and they reset the route displays at the front and back of the bus.

Bus tickets could not be bought in advance.

Bus conductors sold the bus tickets once passengers were settled on the bus, This had the huge advantage that the time spent at bus stops was minimal - only long enough to allow passengers on and off. So journey times were much shorter then than in the later years of single operators doubling as driver and conductor, collecting fares from an entire queue at each bus stop before moving off again.

To sell the tickets, bus conductors moved up and down the passage between the seats selling tickets as the bus was moving. 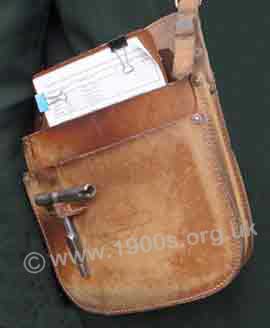 Leather shoulder bag with pockets for coins and documents.

The gadget on the left is for unlocking the personal compartment and for winding on the destination display. 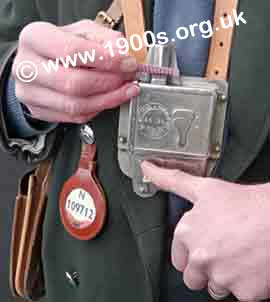 Punching a bus ticket: the bus ticket is put into the slot with the right hand and a lever is pressed with the thumb of the left hand.

A conductor collected passengers' money in a leather pouch slung over the neck and shoulders. There were separate slots in these pouches for documents and different coins, probably for silver and copper. I seem to remember notes being kept in conductors' pockets, but there were few of them. The value of money was such that in normal circumstances no bus journey would cost as much as a note, and conductors certainly did not like being asked to give change for them!

Passengers told the conductor their destination and he - having invariably remembered where they got on - seemed to know immediately what the fare would be. He then pulled out an appropriate ticket from the rack and punched a hole in it. I suppose the hole must have been over the destination point, but I can't remember ever checking.

Conductors always seemed to be remarkably good at remembering who had and had not paid - or maybe everyone was more just honest then. It was certainly common practice for passengers to hold their money out to show that they still needed to pay. 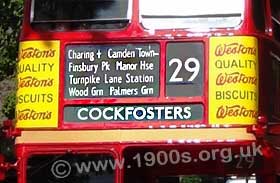 The destination of a bus was shown as white text on black in display windows at the front and back.

As there was of course no electronic means of display, each bus carried a length of lettering showing appropriate information for routes on which the bus might run. It was known as the 'blind' and was stored on a reel and wound on every time the route changed, normally at a terminus where the bus turned round.

Routes and times were also displayed on the posts of some bus stops.

Photos taken by the webmaster in the London Bus Museum at Brooklands, the London Transport Museum and Swansea Bay Museum