For most of the 20th century - until 1983 to be precise - there was no pound coin in Britain. Instead there were paper bank notes.

Inflation and why smaller banknotes were phased out

Pound notes and indeed ten shilling notes had huge buying power in the early 20th century. For example an entire family could be fed and housed - albeit in the London slums - for just a pound a week.

Even when I was growing up in the late 1940s, I heard of a young woman starting work at the wage of £3 a week. My grandmother was horrified that anyone so young and with no qualifications could possibly earn so much.

Inflation was a fact of life, and of course still is. The end of the pound note was due to inflation. A pound was no longer a great deal of money for ordinary people, so it was sensible to replace it with a more durable and easily handled coin.

There is more on this site on the buying power of the old money. Just put inflation into the search box on the home page.

Paper money in circulation in the 1940s and 50s

The only notes that I ever saw as a child were pound notes and ten shilling notes. They could readily be seen in shops as customers handed over money and received their change.

Pound note of the sort that I remember in the 1940s.There were other versions since 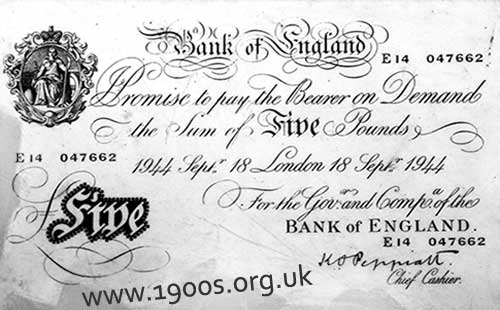 Although these white £5 notes did exist when I was a child, it is a measure of inflation that I never saw one in use. The one illustrated here, dated 1944, was photographed in a museum. These pound notes were extremely elegant with black scrolls on a white background and they were larger than the pound notes that we know today.

Sizes and thicknesses of banknotes

All the various pound notes were about the same size, with 10 shilling notes slightly smaller and Scottish larger denominations larger. The Bank of England 'fivers' and higher were much larger - see the photo above - and had to be double-folded to fit into a wallet. This became a problem when inflation brought them into common use, resulting in size reduction along with colour printing. Ease of forgery of the simple black on white also no doubt played a part in the change.

I understand that blind people could tell the denomination of a note by butting it against the cleft between the ring and middle fingers to detect its thickness.

When the pound coin replaced the banknote many people preferred to use the Scottish notes rather than the coins.


1939 man's wallet with markings for banknotes 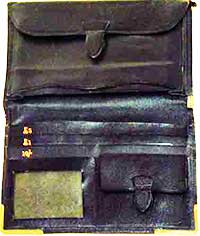 My grandfather's leather wallet showing the labelling for £5, £1 and 10 shilling notes. The single, no-longer transparent, pocket was probably intended for a train season ticket, as credit cards were years away.

The wallet shown in the picture was my grandfather's. I found it with his effects, dated 1939.

Detail of the £5, £1 and 10 shilling markings on the pre-decimalisation wallet.

The markings show that it would accommodate at least one £5 note. For several decades after 1939, men's wallets would have had similar slots, with slots like these for pound notes and 10 shilling notes.

The design changes of banknotes

New designs of existing banknotes either follow the changing face of the monarch or to honour a particular person by incorporating their image into the design.

Technology also plays its part through the development of new more robust or cheaper materials for notes. Hence polymer notes.

Changes due to the pandemic

The Covid-19 pandemic accelerated the changes that had been under consideration for some time. In order not to spread the virus, ways were found to transfer money without having to handle cash or bank notes. Shops accepted contactless credit card payment for increasing amounts  and cheques for sending money were phased out in favour of bank transfers and online credit card payment. Consequently, as I write in 2021, I have never seen a plastic UK banknote even though I understood that they were about to be introduced. Perhaps they have already. I don't know. All I know is that I have never seen a UK plastic banknote, although I did know them in Australia.