At the end of every year, my father summarised the family's monthly outgoings for that year and entered them into his account book. They serve as a useful indication of the annual increases in the cost of living in England. This page concentrates on years 1953-1962.

The following image is a thumbnail for the years 1953-1962 of my father's account book. Extracts in text form are below, but for the complete information, tap/click the thumbnail. 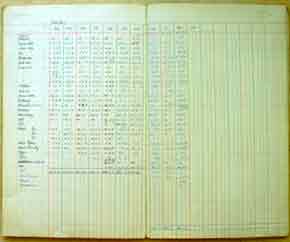 Yearly accounts of expenditure over ten years for 1953-1962. Tap/click for a larger, legible version

Problems with calculating an accurate value for inflation

It was indeed straightforward to put expenditures in 1953 side-by-side with expenditures in 1962 and calculate how much more money my father needed or spent in 1962 compared with in 1953. However, as I looked down the itemised list, I realised that this figure could not be generalised for other families because so many changes could be due to circumstances other than inflation. For example:

These are just examples. My conclusion was that my father's account book could be used to calculate inflation of particular items of expenditure over specific periods but that the time and effort required to tease out the appropriate data would be significant and probably not worth the effort.

Yet there were a few exceptions:

Some reasonably accurate measures of inflation 1953-1962

I saw no reason why the percentage changes of general rates (now council tax), water rates and electricity in our household would be much different from those in any other house. So they would serve to give a reasonable estimate of inflation for the ten year period of 1953 to 1962. The calculation is shown in the following table. In summary:

Inflation in the cost of electricity

The calculation gives the percentage inflation in electricity costs in the ten-year period of 1953-1962 as 32%. Although there were different suppliers and some families would have used more electricity than others, it is probably safe to give a figure of around 30%.

The calculation gives the percentage inflation for general rates in the ten-year period of 1953-1962 as 36%. Bearing in mind that sizes of houses are different, it is probably safe to give a figure of 30-40%.

Inflation in the costs of water

The cost of water apparently decreased slightly over the ten-year period of 1953-1962, so slightly that it may have been the 'noise in the system'. I remember that water was regarded then as essential, so that people didn't have to pay for it by how much they used.

Other indicators of inflation

Housekeeping costs (ie for food and cleaning) could be somewhat generalisable across households, although households did vary in size, and tastes in food and available money would have varied from one household to another. Yet here is the data for what it is worth for my father's family.

So, based on my father's figures, a reasonable estimate for the inflation in the costs of food and other household items between 1953 and 1962 was about 50%. No wonder there were strikes for more pay!

The following box gives the costs of living for a student in 1961. You may like to compare the costs of the incidental items with their costs today to work out a value for inflation between then and now.

When I was a student at the University of Sheffield, I moved to Stephenson Hall in 1961. While there I kept detailed records of my finances. These were of course in pre-decimal currency.

I paid £58.15.6 for Hall fees in the Autumn term of 1961; £52.17.6 in the Spring Term; and £66.11.0 in the Summer Term. The differences were due to a deposit against damage in Term one, and extra weeks purchased during the Easter vacation just before finals. These fees covered a private study/bedroom, breakfast and evening meal on weekdays, and lunch at weekends.

My incidental expenses amounted to around £20 each term. There were no credit cards in those days, nor any ATMs. Each withdrawal involved a visit to the bank, and the payment of 2d (less than 1p in today's money) to cover the stamp duty on each financial transaction.

My records on the costs of various items are indications of inflation and make fascinated reading:

An extended Hall roll photograph was 5/- [25p][These extended photos were common at the time. There is a picture of one in my own school photos.]

There were occasional splurges, only possible because of the frugality exercised day-to-day, and the work done over Christmas as a temporary postman. I clocked up 77¼ hours in 7 days in December 1961, for which I was paid £14/14/9 [Fourteen pounds, fourteen shillings and nine pence]. That equated to 3/- an hour [15 pence in new money].

Examples of such extravagance were attendance at the French Society's Dinner and Dance, the tickets for which cost 8/6 [42½p], a round of drinks 5/2 [26p]. (I can't think how I got caught with that!), and 7/- [35p] for wine. Then there was a Wine Tasting, presumably organised by the same group, setting me back 7/6 [37½p], and on another occasion, a bottle of wine for a Bring a Bottle party 10/3 [51p]! Sitting on the staircase feeling most uncomfortable convinced me to avoid such invitations wherever possible in future.

I was able to buy my own academic dress from my earnings, and pay for a cheap camping holiday at Sanary sur Mer on the Riviera.

Looking ahead, I had arranged a summer break in Southern Ireland, and bought an advance ferry ticket from Liverpool to Dun Laoghaire at £2.8.0 [£2.40].

I was a wages clerk in the 1950s and I made up emplyees' pay packets. The foremen, who often worked abroad, were paid a flat rate of £15.00 per week, and they were the only ones who got the black and white five pound notes in their pay packets. I earned £7.50 per week and this was increased to £9.00 per week when I got married in 1955. Not that the increase from £7.50 to £9.00 was a measure of inflation. Rather it was a hangover from the time when married women were not expected to be employed outside the home, but to be supported by their husbands.