In July 1938 my parents married and set up home on the northern edge of London's suburbia. Somewhat surprisingly some of their documents from that time have survived. They provide tantalising insights into the costs of house maintenance around that time as well a resource for considering rates of inflation between then and now. I say 'considering' not 'calculating'. In real terms, labour was cheap in those days, even though the work force were by no means odd-jobbers just slapping on paint. They were masters or apprentices of their trades.

All the documents are in the old £-s-d currency and they all show the phone numbers of the suppliers with the old-style first three letters of the area as what was known as the area code. Where a document is typed, it is clearly from an old manual typewriter with a slightly worn ribbon and often with misplaced type heads, although always on professionally printed paper.

Cost of work on the outside a house

Painting the house was an extremely major job. There were no replacement windows with plastic frames and no plastic gutters which would not need painting.

Bill for painting the outside of the house. Tap/click to enlarge.

Window frames were made of wood which needed the old paint scraped or burnt off, an undercoat and two top coats of paint against the weather. Then the putty that held the glass inside the frame normally had to be renewed and painted because it cracked ov time. Also, as paint built up with every repainting job, doors and windows tended to stick, sometimes so badly that they would not open. Dealing with this, too, was a major job.


Gutters and drainpipes were made of iron which went rusty. My recollections are that the painting was much more for protection than for cosmetic purposes because there was no way of completely smoothing the rough and corroded surfaces before repainting.

So there was a lot of preparation work to be done, even before the painting, and there was a lot to paint. Even then, the bill for painting the house in May 1940 was only £16.11.6. Surprisingly my father did not choose a local contractor, but one near his work in Golders Green. Even more surprisingly, the contractor was prepared to travel from Finchley to Edgware to carry out the work.

It is interesting to speculate why my father chose to undertake such a major piece of work during wartime. I suspect that it was a now-or-never decision as men were being called up to serve in the forces.

Costs of redecorating a room, 1938

This receipt is papering the walls of the two main downstairs rooms of my parent's semi-detatched hous. The receipt calls them the drawing room and dining room, although we always called them the front and back room. 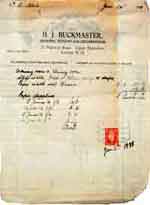 The 'pieces' were almost certainly the decorative bands just below the picture rail.

The receipt is on professionally printed paper and the breakdown of costs is handwritten.

Note that purchase tax had to be paid by buying a 2d stamp and signing across it to invalidate it for other use. I am not sure why some receipts and not others seem to show this stamp. Do you know?

Cost of a plumber 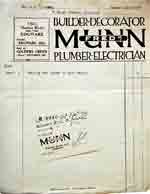 Receipt for a plumber making a new joint for sink waste. Click to enlarge.

Plumbers are usually emergency call outs, and their charges reflect this.

In September 1939, an Edgware plumber charged 5 shillings for coming out to the house to 'make a new joint for sink waste'.

The receipt shows the cost for making a new joint to the sink waste: £0-5-0

Although the reeipt is on professionally printed paper, the typing is clearly from an old manual typewriter.