Old manual typewriters and their disadvantages

Typing with old manual typewriters required more physical effort than with computer keyboards. This page explains why and goes on to comment on differences in appearance of pages produced on a typewriter and computer printouts.

In order to understand why using a manual typewriter was such hard work, you need to know something about its features. 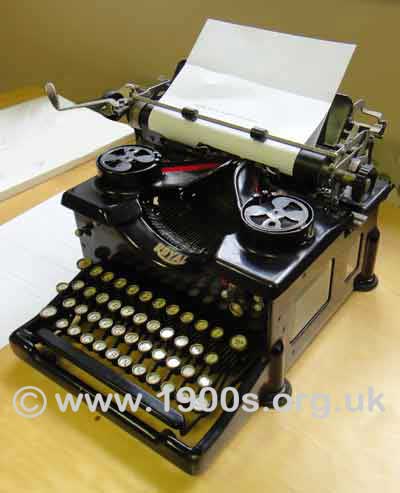 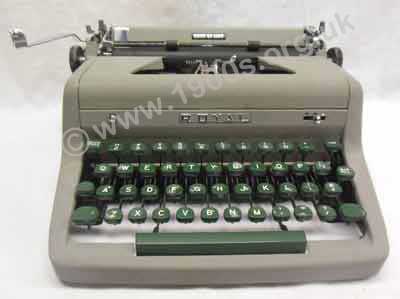 Manual typewriter printheads viewed from above.

Some of the significant features are more visible in the less-streamlined, older typewriter but are actually present in both types. Note the rollers holding the paper, the knob on the right to wind the paper through the rollers, the lever on the left to bring the rollers and paper back to position at the end of each line of typing, and the spools of two colour typewriter ribbon to enable typing to be in black or red.

Inserting and removing sheets of paper

Whereas with a computer printout of today, the printer takes care of stacking finished sheets and preparing clean sheets for printing, with manual typewriters, a typist had to insert a sheet between the rollers and then wind it on by hand using the roller knobs at either side of the machine. At the end of each page, the rollers needed to be wound back to release the paper.

Whereas computers are electrically powered to reduce the pressure required on keyboard keys, a typist had to press hard on a manual typewriter key because it had to force a metal printhead upwards to press hard enough onto the inked typewriter ribbon and hence the paper. A light touch meant no impression - and a blank space.

To type a capital letter, there was a shift key, just like on a modern computer keyboard, but this too required more force to keep down.

Ending a line of text and starting the next one

Because, with a manual typewriter, the paper between the rollers moved along with the typing, the rollers had to be reset for the beginning of the next line. So, at the end of each typed line, typists had to move their left hands away from the keyboard and pull a large lever to return the rollers and paper, positioned ready for the next line. This was required as many times as there were lines on the page.

Sometimes, if the typing was too fast or more than one key got pressed at the same time, the printheads would lock and need to be disentangled by hand. It was not particularly difficult, but it was an irritating and often dirty interruption to the work.

Manual typewriter printheads viewed from above. 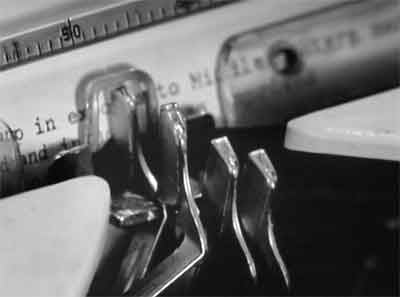 Printheads jamming together if the typing was too fast.

Tap/click to enlarge the first image to note that the symbols are inverted left to right so that the imprint on the page is the right way round.

Printheads were integrated into manual typewriters and could not readily be removed. This meant that that each typewriter could only show one style of font in only one size.

Improvements to change font style and size on a machine

As typewriters improved, they were adapted to run on electricity which made a typist's work easier. They were called electric or electronic typewriters. They could take interchangeable printheads which allowed for different font styles and sizes. There is more about them on the page about producing more elegant pages for publication, called camera-ready copy. There were two types of modified printhead called golf balls and daisy wheels, and there is more about them and camera-ready copy elsewhere on this site.

Interchangeable printheads were of course an advantage but it was fiddly to replace them every time a new font size or style was needed. Furthermore typing with golf balls was incredibly noisy as the metal balls clanked as they rotated and banged down heavily with every typed character. Daisy wheels were flimsy and chipped easily.

Fortunately these modifications did not last long as computers and word processing soon took over.

Today, paper sizes are standardised internationally, but in the heyday of manual typewriters, the standard paper size was called foolscap. It was slightly taller than A4 as can be recognised from the photo below. 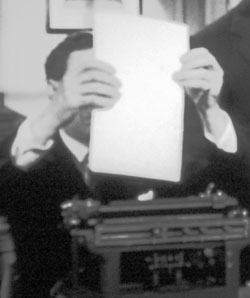 Foolscap paper. Note that it is longer than A4.

When typing with a manual typewriter, it was nearly impossible to put the same pressure on every key. So the resulting typing varied in darkness, as can be seen from the old letter below. Note also that all the characters occupied the same width, irrespective of whether they were narrow, like 'i' or wide like 'm' and that the letters appear slightly blurred because of the smudging of the typewriter ribbon. (With electric typewriters and modern computers, the spacing is different for narrow and wide characters, known as proportional spacing.) With manual typewriters the text is not proportionally spaced.

Incidentally the letter shows the punctuation convention of the time, with more punctuation marks than have become usual in later years. In particular, 'Mr' has a full stop after it. Being relatively short, the letter does not show the normal practice of the time of two or three spaces after a full stop. This practice was dropped when justified text (right-hand text aligned as well as left-hand text) became common with the advent of computerised word processors.

Copies from a manual typewriter