Shorthand-typist: a common job for women before the computer age

A shorthand typist was someone, usually a woman, who used shorthand to take dictation of letters and other documents and then typed them. This was before the development of dictation and word-processing software which enabled people to do their own typing.

A shorthand typist was someone, usually a woman, who used shorthand to take dictation of letters and other documents and then typed them. Shorthand-typists were not generally responsible to any one man - yes, almost always at man - and they tended to work in a pool with other shorthand-typists, although there were exceptions. 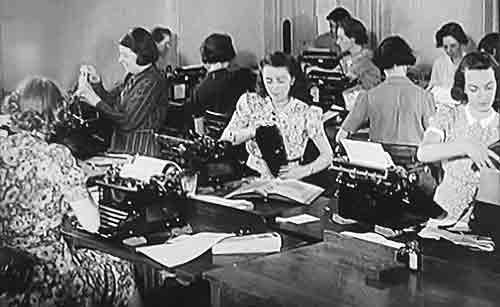 A typing pool. Screen shot from an old film.

Whenever a man wanted a letter sent, a shorthand-typist would be called into his office, notebook and pencil in hand, and he would dictate the letter at normal speech speed. She wrote it down in what was known as 'shorthand', and took it away to type on her manual typewriter.

Shorthand-typing was regarded as a job rather than a career because the girls - not women - were expected to leave and get married. Sexism was rife in offices at the time.

There were several versions of shorthand, and although I never learnt one as I never was a shorthand-typist, I am full of admiration for those who did. It seemed and still seems very difficult to me, although numerous women managed it. Once out of college, I understand that they soon adapted their shorthand with their own shortcuts and admitted that no-one else would be able to read it back.

The typing was 'touch-typing' which meant that the typist was not to look at the keys while she typed. This was so that she could keep her eyes on her shorthand notebook - spiral bound at the top so that pages could be flipped over quickly, so not interrupting the note-taking.

A shorthand notebook, spiral bound at the top for rapid page turning

My mother-in-law told me that her training involved the keyboard and her hands being covered with a cloth, but there must have been other methods.

The skill of a typist was measured in terms of how many words per minute she could type.

I did teach myself to touch type from a book in the 1960s and the skill has been extremely useful to me, with computer keyboards having replaced typewriters. In my view, in this digital age, touch typing ought to be taught in schools as a compulsory subject for both sexes.

The need for shorthand-typists in the 1950s

Before the digital age which led to professional men typing their own letters and documents, they always had shorthand-typists to type for them. Men would never type their own letters! They were not expected to know how, and it would have been beneath their dignity anyway.

What it was like to work in a typing pool

When I started work at a big construction company, in Leicester Square, I was in a typing pool. There was a manager sitting at the front of the large office in which we sat in rows (all girls, of course), almost exactly like school. She allocated jobs when the (all male) drawing office needed help, and we'd be sent down there.

We - the shorthand takers - had to sit on high stools, just like the drawing office blokes, in tight short skirts and high heels. We were so embarrassed. Then, when we finished taking dictation, we had to shuffle off our stools and walk out, often with 20 pairs of eyes watching our reverse ... horrible. In a horrible and cynical way, it's quite entertaining to hear all the uproar nowadays about sexual harassment in the past. I and all women I knew thought that it was completely normal, from that very low-level stuff from the draughtsmen, knowing how shy and uncomfortable we all were, to being physically groped on over-full tube trains. No-one ever talked about it.

Back to the typing pool: We were allocated a time to visit the lavatories, right to the actual minute, woe betide you if you missed your slot.

Finalising letters and documents after typing

Once a short-hand typist had typed the letters or documents, she normally placed them inside a hard-covered book, designed for the purpose, with each document separated by a page. This book was presented to the man who instigated the dictation, who checked everything and signed the letters.

If he had second thoughts, an entire page often had to be retyped. With single letter corrections, though, there were special strips of white-coated paper that could be rubbed over the wrong letter to cover it with white and effectively erase it. There was also a white masking fluid called Tipp-ex or Snowpake that could be painted on, which dried on the paper.

Once the wrong letter had been erased, the correct one had to be typed on top. It was normally near impossible to align the document precisely in the typewriter. So the new letter was never quite in line with the rest of the typing, but no-one seemed to be particularly critical because these mistakes were so common.

Career progression for a shorthand-typist, if it existed, was to become a secretary.

A secretary was trained in shorthand-typing and often a promoted shorthand-typist, but she had a more responsible role and was better paid. She was expected to answer phones, file, keeping diaries, and be at the beck and call of her boss. Much the same job exists today but the job title has changed to Personal Assistant or Administrator.