The Banda copying machine was a British type of spirit duplicator which came in several different versions. In the early 1960s I used one to copy maps and works for geography classes.

The school Banda was heavy and was kept on a trolley, with space below for a can of fluid and packets of the various foolscap papers needed for making the copies. 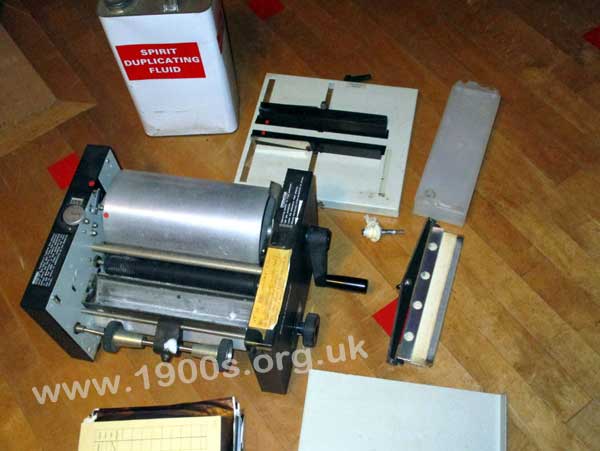 Parts of a Banda. Photo courtesy of Tim Harberd

The machine consisted of several parts: a drum/roller to which the master-copy could be fixed; a handle to turn this drum; an absorbent pad to be soaked with special solvent; an in-tray for blank paper; and an out-tray for the copies.

The school Banda was kept in a corner of the staff room and there never seemed to be a clash with staff wanting to use it. Neither were costs a problem. How things have changed in schools!

How a Banda master was made

Two different types of paper were needed to make a master. The top sheet was the master onto which you would type, write or draw. Below this was the dark coloured sheet, which faced upward and was coated with a layer of wax impregnated with colourant. The pressure of writing, typing or drawing on the top sheet transferred the coloured wax from the lower sheet to the shiny underside of the master, producing a mirror image of what was to be duplicated.

Several colours of waxed sheets were available, but purple/mauve was most commonly used, producing a good dark copy. Red, blue and green were useful, but black produced a less strong copy, while brown and yellow were often disappointing. I would use several different colours for any map or diagram. It made an interesting challenge to choose a good balance of colours.

Like carbon paper, the waxed sheets could be re-used in portions where the coloured wax had not been removed.

I found it quick and simple to make masters. I kept a supply of papers at home and make the masters during evenings.

I dug my Banda 75 HAF out of the loft and find that it is still working - almost! The problem seems to be getting thin enough paper to feed properly. Some makes of 75GSM photocopier/printer paper work fine but others don't. Also the carbon sheets appear to have dried out or gone off over the last thirty years, and I've had less joy tracking down new ones.

I used to work with five colours.


How Banda copies were made

First the absorbent pad needed to be wetted by pouring out a little of the special solvent, a form of alcohol smelling like methylated spirit. A pile of blank paper was placed into the feeder tray. The sheet with the mirror image was fastened onto the drum of the Banda, with the inked image facing outwards. 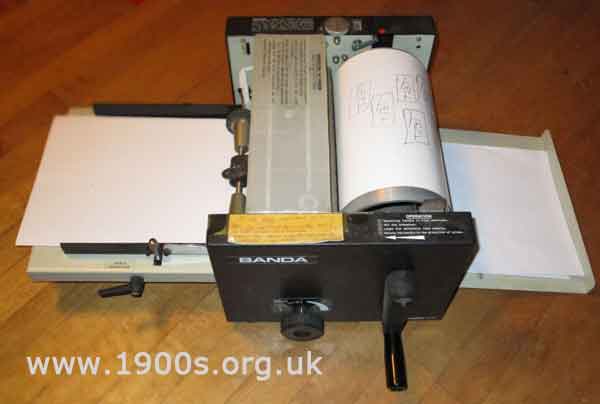 Then you turned the handle. As the dampened roller moved over a fresh sheet of blank paper, some of the coloured wax dissolved and was left on the paper. This produced a mirror image of the master, so the double mirror image reverted back to show the original design.

I used several different coloured wax sheets for any one map. They looked only marginally different from one another at this stage, so it was important to remember which was which for a multi-coloured duplication.

One master would produce 40 or so good copies, ample for my small geography classes of about 25 pupils. After that the copies gradually became paler as the coloured wax was used up.

I used to use a Banda as part of my daily secretarial duties. Mistakes could be corrected by using a razor blade and removing the incorrect impression. This was followed by inserting between the sheets a small tear-off piece of the waxed sheet and typing or writing over it. 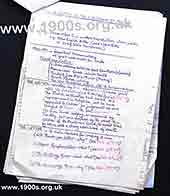 A Banda copy showing the slightly fuzzy reproduction and the purple/mauve tone.

Tap/click either image for a larger, more legible version.

Copies made with a Banda were completely legible but somewhat fuzzy, lacking the precision of modern photocopies. They had their own characteristic sweet smell which could linger for some time.

It was important to store the copies away from the light. Otherwise the colours faded and the white paper turned a dirty looking cream.

The end of Bandas

Although black and white photocopies started coming in around the 1970s, they were expensive compared with Banda copies. As late as the 1980s I was still using a Banda at home for community work, having been given an old machine when a large firm modernised to a photocopier. It was useful to be able to make my own cheap copies, with the advantage of colour. However, once photocopies became universal and colour was cheaper, the use of the Banda gradually died out. I was very sad to have to take my faithful old friend to the local dump.