The overhead projector: before smart boards and computer projection

When I was a young adult in the 1970s and 1980s, the overhead projector was very much the 'in-thing' to use for anyone delivering information to a group. Quite apart from the questionable possibility of it improving learning, it showed that the user was up-to-date with technology. 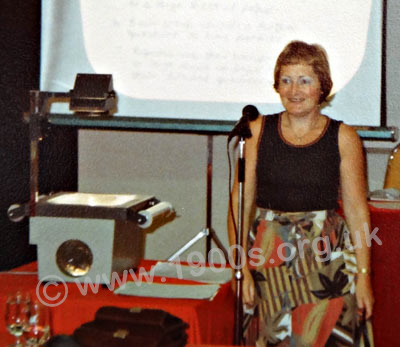 Overhead projector in use in a lecture. The lecturer is me in the 1980s.

An overhead projector was normally referred to simply as an OHP.

Advantages of the OHP

Clearly the computerised projection which later replaced the OHP had significant advantages. Yet the OHP did have advantages over what it replaced.

Before the overhead projector, the most common way of delivering a presentation was known as 'chalk and talk'. The person giving the information simply spoke and used chalk to write or draw on a blackboard - today normally called a chalkboard - necessarily facing away from the children. This was how children were taught in Victorian times, right through to my own schooling in the 1950s. Slide projectors with talk and even films were also used occasionally but rather as a special event or treat.

The educational value of the overhead projector

Personally I am not sure that it necessarily helped learning to show pre-prepared material on an OHP, as the delivery was often too fast in consequence. Writing on a blackboard/chalkboard took time which gave an audience time to think and take notes, whereas with an OHP an entire transparency was shown at once. Some presenters got round this by using a sheet of paper to reveal parts as they came to them.

I must not of course generalise. Certainly pre-prepared material gave presenters a certain sense of security, which was an advantage in itself.

The structure of an overhead projector

The structure of an OHP can be seen from the above photo. Essentially it consisted of a boxed lamp which shone onto a transparent plate, so projecting upwards whatever was placed on the plate. This upwards projection was focussed by a lens and reflected by a mirror so that the image could be projected onto a screen of some sort. The focus could be adjusted for a range of distances to the screen.

Irritations with an OHP

OHPs normally needed some time to warm up once switched on in order to provide a bright enough light.

I can also remember numerous occasions when the OHP refused to function properly, so time was wasted with the audience sitting waiting while a technician was sought. Then the presenter had to resort to chalk and talk anyway.

To be fair, though, these days audiences are often left frustrated as Zoom presentations don't work as expected.