Transparencies for the overhead projector and their preparation 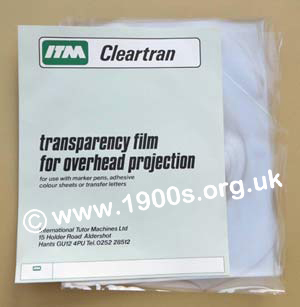 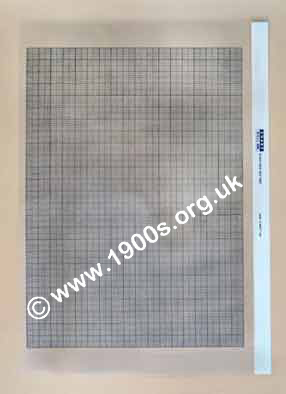 Today transparencies and overhead projectors have largely been replaced by video projectors and interactive whiteboards they were the best system of projection a few decades ago. I used them constantly in my lecturing work.

Separate sheets had the significant advantage that they could be prepared carefully before hand. They could be duplicated onto paper for distributed to an audience and kept for later presentations.

Rolls of poorer quality material were designed for single use. They could be written on during a talk which had the advantage of helping the audience to follow an argument. Once a screenful had been used up, the roll could be wound on as required. The photo on the overhead projector page shows such a roll attached to the projector.

The sheets were coated with a type of acetate which held writing without it separating out into globules. This coating came off slightly when handled and it affected the skin. So there was a white strip at the side for handling. It was difficult, if not impossible, to prepare the transparency without handling it outside the special strip, and I for one used used to feel my fingers slightly numbed and uncomfortable afterwards. After a good wash they felt back to normal.

Later, transparencies were developed without the strip, so were presumably deemed safe for the skin. They were also developed to take photocopying.

Special pens were needed to write on the transparencies. They were available in several colours and thicknesses and came in two types: permanent and non-permanent. The permanent ones always seemed to come with black outsides, so as to tell the two types apart at a glance.

These pens were widely known as OHP pens

There were advantages and disadvantages to each type. With non-permanent pens, errors could easily and quickly be erased with a damp cloth, so allowing rethinks, but care had to be taken to keep them away from anything wet. Stories got around of teachers carrying them between buildings in the rain and finding to their obvious consternation that they were blank on arrival.

Permanent pens, while not having this disadvantage did not allow for errors or rethinks.

How to prepare transparencies

It was of course perfectly possible to make a transparency very quickly indeed by simply writing on it with an appropriate pen. However, for special presentations, particularly company meetings, something more professional was expected. (Remember this was at a time when word processors were in their infancy and printers were unsophisticated with only one font and font size at a time.)

How to vary fonts

The only ways to get changes in font types and sizes was to use stencils or rub-on letters. Both very labour intensive because of having to line up each letter with the adjacent ones, and it required special drawing boards with moveable ruler and clips to hold the transparencies in position. Nevertheless, it was common practice. 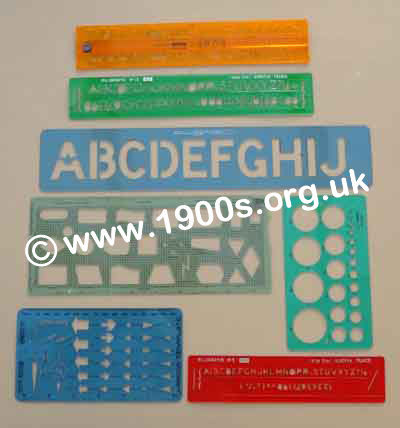 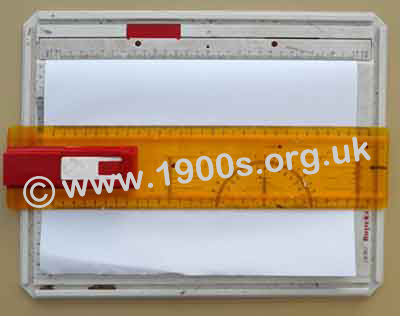 Another way was to use rub-on letters, also known as dry transfers which went by the trade name of Letraset. This was equally labour intensive because of lining up the lettering. 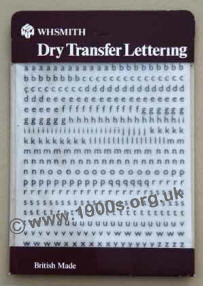 A range of stencils and dry lettering sheets were the tools of the trade for whoever had the task of making professional-looking transparencies, as were the special drawing boards.