Carbon paper and how we used to use it for copying

Before the age of computers. photocopiers and scanners, secretaries and shorthand-typists nevertheless had to produce copies of documents such as letters and papers for meetings. Also members of the public often needed to make copies of handwritten letters or drawings. The only ways open to them were much inferior to what we are used to today. 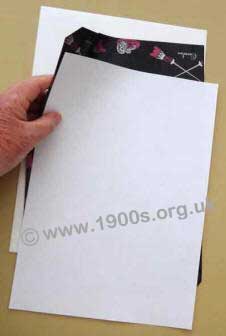 A 'sandwich' of carbon paper between two sheets of paper

The most common way to make just a few copies of a document was with paper called carbon paper. This had to be used at the time of typing. Unlike a photocopier or scanner, it could not copy a finished document. 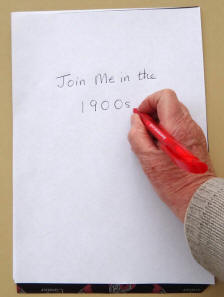 What carbon paper was

Carbon paper was thin paper coated on one side with a layer of black generally known as carbon. In fact it could have been dried ink or other pigment bound with wax. It was always black in the early days, although in later years, other colours became available. Whatever, it was, the name 'carbon paper' stuck.

How carbon paper was used

People making copies had to start by putting the carbon paper, coating side down between the paper she would be typing, writing or drawing onto and the paper which was to be the copy. Then the 'sandwich' of carbon paper and ordinary paper were either rolled between the typewriter rollers or used directly.

How to make more than one copy

The 'first copy' was usually completely legible, provided that the carbon paper was fairly new, but the quality certainly deteriorated as the number of copies increased. Naturally, though, when several copies were required, typists tried to work with as large a 'sandwich' as possible, so that they didn't have to repeat their typing. However, the last copy often left much to be desired and was often hardly legible.

The term 'top copy' referred to the original, rather than one of the carbon copies.

Left to right: a flimsy copy, top copy and a sheet of carbon paper.

The carbon paper here shows as longer than the paper because it is for old foolscap paper. The paper would also have been foolscap too in the mid 20th century, but A4 is all I have now for these illustrations. The carbon paper is actually slightly shorter than foolscap because it wasn't normal or easy to type or draw in the top and bottom margins.

In order to get as many copies as possible from a single typing, the paper had to be thin so that the banging of the keys was transmitted as forcefully as possible. So the copies were normally made on special thin paper, known as a 'flimsy'. 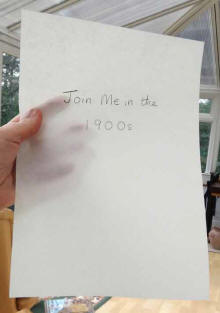 As a child and a teenager, I used flimsies as tracing paper for drawings because it was so thin as to be almost transparent. It was cheaper than proper tracing paper which was thicker and treated in some way to make it less opaque.

Unauthorised viewing of documents which had been copied

Detectives in old films were in their element!

The coating on unused carbon paper was shiny, but where it had left imprints on paper, it was matt. Viewed from the coating side, these imprints were mirror images of the typed letters. So it was perfectly possible to look at used carbon paper in a mirror and read what had been typed.

After a number of uses, though, the letters were so jumbled together that it would have been a very difficult task to decipher them.

Left the underside of a used sheet of carbon paper. Right, the same used carbon paper viewed in a mirror, showing how it looks legible once the carbon is transferred to the paper.


How carbon paper was sold

For 100 or so sheets, carbon paper was sold in a thinnish box and for smaller numbers in a protective wallet. Even used sheets were kept in the box or wallet until needed again, in order to keep them crease free and prevent their dirt from spreading. 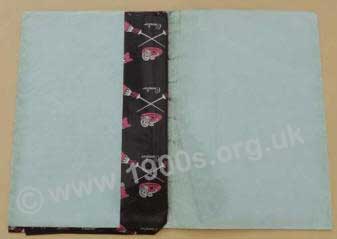 A pack of foolscap carbon papers in a protective wallet

I am surprised that carbon paper is still sold today. I can only assume that it is produced differently from the old sort to make it much cleaner. The carbon paper which I used to know was dreadfully messy. The coating was black and dirty and we had to be careful not to touch it against our hands or clothes.

The black coating on carbon paper gradually wore off with re-use making the quality of its copies unacceptable. Then it had to be discarded and replaced with a new sheet.

By the time that I was old enough to attend meetings with circulated papers, photocopiers were in use. So I never saw carbon copies in meetings. I can imagine, though, that copies were distributed according to who was deemed to be most important, with the chairman having the top copy, etc.

Today carbon paper is still available, but it is mainly used in craft work and for single copy receipts, often in what are known as 'duplicate books'. In the 1980s, I had to use a duplicate book with a ball point pen for handwriting students' reports.