In April 1938, my father bought 9 Brook Avenue, Edgware, Middlesex, a semi-detached house only about 4 minutes walk from the Edgware Northern Line Underground station. 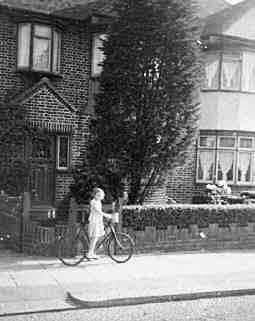 The design was typical of suburban semi-detached houses, although the road was somewhat elegant with the sides separated by a green, railed off with wrought iron railings. Sadly these railings were removed for the metal in the war effort.

The rooms were larger than most other 1930s-built semis with a large hall, a kitchen large enough for a table and chairs and a walk-in larder. There was also space for a garage. A plan of the layout is in the section on Suburbia.

According to old documents which have remarkably survived, the price of the house was £835. My father put down £200 cash and used a mortgage with what was then Abbey Road Building Society, currently the Abbey National.

The monthly mortgage repayments were £4, as shown by my father's account book and his monthly expenditure.

The salary requirements for the mortgage

I never knew my father's salary for that time, but judging by the contribution in the box, it was probably about or a little over £5 a week.

Earnings in 1939 and what could be bought with them

My father (like many others) had been out of work for most of 1926, but he was in a steady job by 1939 earning a weekly wage of £5. On this, he and my mother were even planning an overseas holiday, which of course the war stopped!

The price of the same house today

As I write in 2020, I have tried to find the price of an equivalent house. As an approximation, it is something between £700,000 and £800,000, but the situation, room sizes and garage space, etc cannot be exactly identical.

What is clear is that inflation on house prices has been very severe indeed: a factor of about 1000 in 80 years. Yet what is also clear from what John Cole writes in the above box, earnings were very small indeed by the standards of today, but so was the cost of living.

What is also clear is that buying a house just before World War Two was an excellent investment, provided of course that it escaped the German blitzkrieg. Was my father lucky? Yes, as far as 9 Brook Avenue was concerned, but he had lent his parents money to buy a house from which they were bombed out. What he saw back from the Government after the war in compensation was comparatively insignificant.

Costs of running a house

The above menu shows pages on the costs of furnishing, maintaining and living in the house.