The hall and staircase of a typical 1940s house

Plan of the hall layout

Plan of the hall of a fairly typical 1940s suburban house, based on recollections of 9 Brook Avenue, Edgware. Although many similar suburban houses had smaller halls, with different embellishments, the basic plan would have been the same.

See the 1940s house for how this hall plan fits into the plan of the other rooms on the ground floor of the house.

As explained on the mid-20th Century housing estates page, the most up-to-date 1940s English suburban semi-detached houses were built in the 1930s. All had the same basic plan, although my family was fortunate in that ours was larger than most.

What seemed to strike our guests was the relatively large sizes of the hall and kitchen. This page is about the hall and staircase.

Naturally, once inside the house, the personal preferences of the occupants showed, although these were dictated by what was in the shops at the time of purchase and what were hand-me-downs. 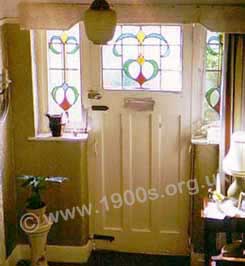 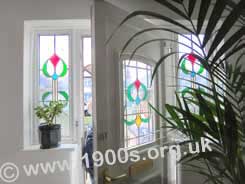 Left: Old style front door, photographed in the 1960s. In the 1930s and 1940s the wood would have been varnished wood, not painted. Note that the glazing is upside-down compared with what was standard along the road, as shown in the right-hand photo. See the main text for an explanation!

Right: Modern replacement windows and doors along the road. They have used the original glass in the double glazing, but upside down. I wonder if today's residents know that the glass panels survived the WW2 bombing.

At the time, our stained-glass hall window seemed to me, as a very young child, like a monster with huge eyes and large shoulders, and I had nightmares about him coming out of the front door towards me. So my father had the windows re-inserted upside down. Then the nightmares stopped.

There was a non-descript coloured curtain that could be drawn across the door and side windows at night.

The doors from the hall to the rooms opened towards the rooms and were varnished like the front door, but the panels were smaller. I think there were eight of them.

What was bought in the late 1930s in the way of hall furnishings would have been typical in style in other houses furnished at that time because it was dictated by what was in the shops. Differences would have been relatively minor.

Our hall floor, like other hall floors, was covered in lino with a dark to medium brown marble pattern. My mother polished it regularly on her hands and knees till it shone.

There were four items of bought furniture, all in dark wood.

• A small table was tucked away inside the front door. It had a drawer with a shelf underneath. Later in the 1950s it was where the one and only telephone was located.

• A slightly larger square table stood by the door to the lounge (or 'the front room' as it was always called). It was a much more elegant affair, comprising a top and a shelf close to the floor. It had turned twisted wooden legs.

• Opposite this table was what was called the 'hall stand'. It was as tall as a man and had hooks for coats and hats, a small mirror and a small seat with a hinged lid over a container for gloves etc. There were slots at the sides for umbrellas. It came in several versions, and every house seemed to have one or another of them in its hall.

Hall stand, photographed at an auction. Ours was identical apart from the mirror being smaller and oval.

• Between the door to the kitchen and the stairs was a carved wooden wall-mounted clock. 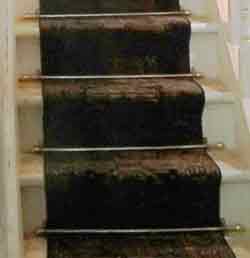 Stair carpet - a long narrow length held down at the edges of each stair with decorative clips and showing the wood of the staircase at each side. Ours was a golden colour.

(Underneath the stairs was a glory-hole cupboard, hidden from view by a partition and door which matched the yellowish varnish of the stairs and banisters.)

Additionally there was a door mat inside the front door for wiping our feet when we came in. Incidentally it was never deemed necessary to remove outdoor shoes when indoors.

Other items in our hall were not typical in that they were either hand-me-downs from older relatives; bought because they appealed to my mother, or - for the want of a better word - heirlooms. Not that the 'heirlooms' were particularly expensive. Their value was personal because of family associations. 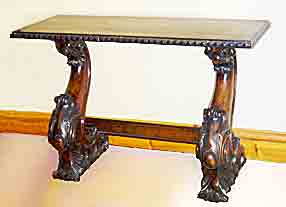 The hall walls were papered in a slightly textured, non-descript beige colour. It was the same throughout the house.

Throughout the house, the walls were only papered to within about half a metre of the ceiling. The upper part was known as a 'drop ceiling'. Around the demarcation was a picture rail with a papered frieze below it. Pictures hung from the picture rails. (The drop ceiling and picture rail fashion persisted from the early 1900s, and probably before, until around the 1950s.