In July 1938 my parents married and set up home 9 Brook Avenue, Edgware, Middlesex on the northern edge of London's suburbia. My father had bought the house in the previous April.

Receipt for furniture.
Tap/click for a larger, legible version or see the following transcription

Estimates and receipts as a resource for estimating inflation

Remarkably, some of their documents from that time have survived, and provide tantalising insights into the prices of household items at the time. They are also a resource for considering rates of inflation between then and now. I say 'considering' not 'calculating' because production methods and materials have changed so much over the years.

Essentially these prices are pre-war, ie before the onset of World War Two. Although some of the items were purchased afterwards, the real impact of the war was yet to hit.

All the documents are in the old £-s-d currency, but money has devalued so much that realistically only the pounds are significant today. The number of shillings indicate the fraction of a pound, where there were 20 shillings to a pound. A guinea was £1-1-0 and gns was short for guineas. Guineas rather than pounds were used to imply superior quality, and accordingly professional fees were generally quoted in guineas.

Receipts for furniture and furnishings

A document dated 30th June 1938, just over a week before my parents were married, shows that they went up to central London for their furniture. The receipt gives details of the items and the prices. Jaco was short for Jacobean, indicating the dark brown wood that was my mother's preference.

I can make sense of most of the items listed. The kitchen table I remember as white wood which had to be scrubbed with a scrubbing brush just as my mother's mother used to do. (Some years later in the 1950s it was covered with a plastic laminate.)

The 'bentwood' chair was a bedroom chair, and the kerb went round the hearth of the coal fire to keep in the dirt.

Yet I am at a loss to understand the miscellaneous bed items - the spiral comb and the green platform.

In 1940 my parents had to buy some more sheets for their bed. Probably they had been existing on sheets given as wedding presents or the receipts have not survived. Again it was the Oustons' shop that my parents patronised. A pair of double sheets cost less than a pound - 13s/11d and were probably at pre-war prices from pre-war stock.

The old receipt cannot can be directly used to calculate the rate of inflation. Knowing my father, the sheets were probably linen rather than cotton, and certainly not man-made fibres which had not yet been invented for the mass market. 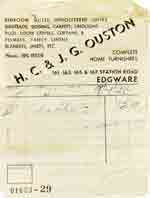 Receipt for a pair of sheets dated 9th July 1940. Tap/click for a larger legible version.

The sheets were almost certainly double ones as my parents had a double bed and I was only a baby in a cot at the time. The fact that they were sold as a pair reflects the fact that beds were always made up with a bottom sheet, a top sheet, blankets and possibly an eiderdown. Duvets were unheard of at the time among ordinary people.

The receipt is on professionally printed paper and the cost is handwritten. It appears that it is a carbon copy, as print on carbon copies was always dark blue.

In 1940 that my mother bought one of her most prized possessions - again from the local furniture shop, Oustons. It was a carved wooden wall clock, costing £1-5-0. She said that when Mr Ouston came to hang the clock, he said that if it he had seen it in place he would have charged more. Apparently the clock was made by his father or grandfather. World War Two must have already started, and Oustons shortly closed down. 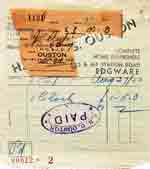 Tap/click for a larger legible version.

Richard Ouston recently contacted me via this website, and I was delighted to donate the clock back to the family.

Again the receipt cannot realistically be used to estimate the rate of inflation for this type of work between 1940 and the present day because the clock was hand-carved from solid wood. It was not mass produced from cheap wood with a laminated finish. Nevertheless it serves to show how times have changed. But fancy such a clock now being sold for just over a pound!

The receipt is on professionally printed paper and the cost is handwritten. Again it is almost certainly a carbon copy as carbon copies were always dark blue writing.


An aside from the webmaster

I was told that my uncle had been to the London outlet and recommended the three piece suite, and that my mother asked my father to buy it to please her brother. Yet she knew it was not what she wanted. Accordingly the family lived with an uncomfortable, then modern-looking, three piece suite for the next 40 years. By chance I have a picture of the bookcase one of the chairs, which is clearly uncomfortable. The pale wood would not have been my mother's taste as she favoured the dark wood, described in the receipt as 'Jaco'.