As a child growing up in the 1940s, I dreaded my mother washing my hair.

The reason for my dread was that my mother had the old-idea that if you got wet "the dampness went into you and gave you a cold". So my hair was never allowed to dry naturally; it was rubbed and rubbed with a towel until it was dry. Can you imagine the tangles! To make matters worse, my hair was long. (It was in plaits during the day.)

Then when my mother had decided that the tangled mass was dry, she would drag a comb through it - which tore it out. Later my aunt told me to not to bother to dry my hair with a towel, but just to comb it while it was still wet starting from the ends away from the roots and then progressively combing from a little bit further up. I have never looked back.

Fortunately, as it seemed to me, ordinary people didn't wash their hair very often, and this was probably the case for generations previously. There was talk of preserving the scalp's natural oils and of not allowing the 'damp to get into you'.

Soap or shampoo for washing hair

I can't remember what my mother used to wash my hair, but I suspect that it was plain soap. My father washed his hair with soap all this life. He died in the early 1970s. Shampoos were not common until the late 1950s, although one called Drene had existed in the 1930s.

A powder known as a dry shampoo was available. I did try it once. It was brushed into the hair and absorbed its greasiness. It did nothing to cleanse the scalp, and as it never brushed out properly, it took all the shine out of the hair.

The timetable for washing hair

In my home, hair was always washed on a Friday after tea. To make it shine, it was rinsed with vinegar and rain water from the water-butt outside.

Hair brushing was more common than combing. As this was before plastics became commonplace, combs were either made of bone or metal. So in real terms they were more expensive than the combs of today. Brushes were bristle, set into wood, and wood was widely available and cheap, while numerous small farms reared pigs for food, making their bristles a by-product.

Hair brushing and brushes for women and girls

For women and girls hair brushing routines were widely favoured and rigorously followed. Or perhaps I should say that when one fell short of the designated 100 strokes a day, I, for one, felt guilty. It did get rid of some of the dust and it certainly made hair shine but it also encouraged greasiness.

The sort of brushes were hardly different from wood and bristle ones sold today in that they had a handle.

Hair brushes for men and boys

Men's and boys' hair brushes were different from women's and girls' ones in that they didn't have handles. I don't know if there was a practical reason for this or whether it was just fashion. These hair brushes came in pairs. The body of the brushes were held one in each hand and both hands were used at the same time for what was really merely styling. 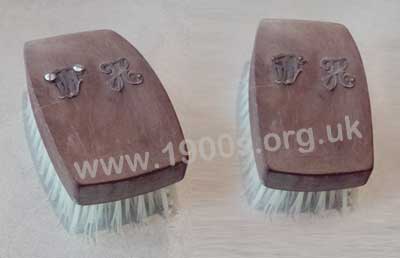 Pair of men's hairbrushes, with the owner's initials secured onto the back surface. Photo courtesy of Bill Hogg. The initials WH are those of his father of the same name, William Hogg. 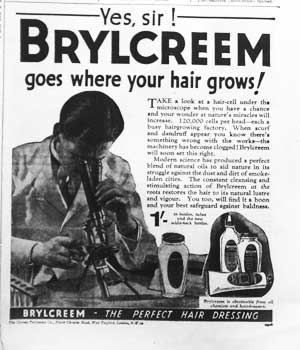 I never knew anything of the 100 strokes a day for men and boys or of brushing causing greasiness.

Greasiness due to brushing would not have noticed anyway because it was fashion for men and boys' hair to be smarmed down with a grease or lotion called Brylcreem. To prevent easy-chairs becoming greasy, all households used chairbacks which could be washed. There is a photo of a chairback on the page about general furnishings.