Marcel waving and finger waving, fashionable in the 1920s and 30s

What Marcel waving was and its appearance

Marcel waving was a type of curling or setting hair that produced tight waves close to the head. It was particularly popular in the 1920s and 30s, and is shown in the first photo, which is of my mother-in-law. My own mother always referred to the style as Marcel waving, never finger waving which I believe is a more modern term or perhaps a term for less immaculate-looking close waves made at home. 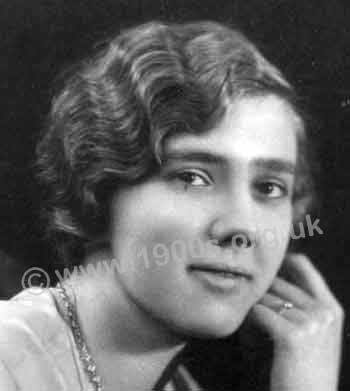 Hair set in Marcel waves: a family photo taken in the 1920s

I think you can believe by looking at the photo, that true Marcel waving was always done professionally. For my mother-in-law it was part of her 21st birthday present. 21 was the age when children formally became adults - just as 18 is today.

The difference between Marcel waving and finger waving

Curling tongs were available for home use, so women certainly did produce close waves as well as curls using heat.

My mother told me that her friends of the time achieved fairly tight waves at home using special clamps. Hers remained in her possession long after the fashion ended. So I have been able to photograph them.

The first photo shows the clamps, and the other photos show how they were used. This was always in the daytime before some special event, as sleeping on the tight waves inevitably spoilt them to some extent in spite of the widespread use of hair nets at night.

The waves were pressed in place with the fingers onto wet hair, and the 'peaks' of the waves were gripped with the clamps while the hair dried. 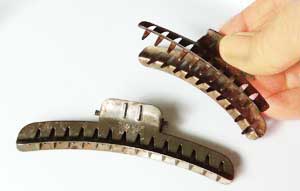 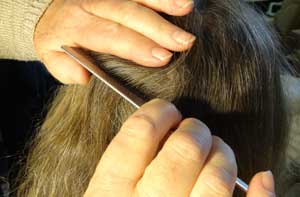 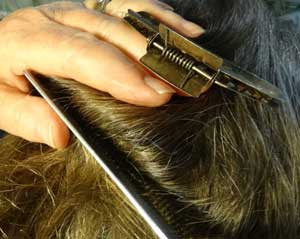 
My trials for taking the photos showed that the clamps were top heavy. So a strong hair net or scarf would have been required to hold the clamps in position. A scarf would of course slow the drying process. Home hair dryers were not common at the time.

For setting lotion, I know that sugar water was frequently used, but I never spoke to anyone who actually used it themselves. Some of my school friends in the 1940s mentioned that their mothers used it. They heated sugar and water in a saucepan and let it boil until it the sugar dissolved, then let it cool. I would imagine that this sugar water would make the hair sticky and attract insects, but I have no evidence for this, and it was certainly widely used.

My mother said that heated curling tongs could be used to to produce close waves, but they needed very careful handling - for reasons explained on the curling tongs page.

As fingers and comb created the wave - just as in finger waving - its peak was crimped with the curling tongs.

Curling tongs as used to crimp the peak of each wave

True finger waving, on the other hand, was used on wet hair with some sort of setting liquid, like the sugar water described above. These days, of course, other options are available.

Marcel look-alike hairstyles for older women in the 1950s

I have always noticed how women, as they get older, tend to retain something of the fashions of their younger years.

The final two pictures show typical hair styles that I remember among older women in the 1950s. The resemblance to Marcel waving is obvious. Both photos are screen shots from old films. 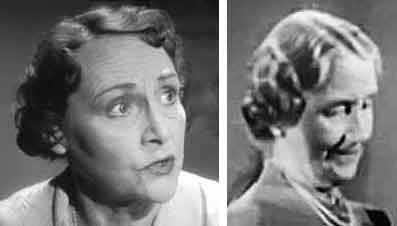