Rag curls are curls produced by rolling fairly thick strands of hair up into strips of fabric and leaving them for several hours to set into shape. They produced a rather loose, natural-looking curl, and most of the photos labelled as rag curls on the internet could never have been produced that way. 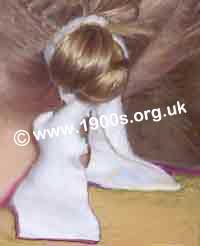 Hair in a rag curler 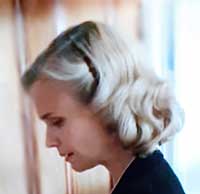 Rag curlers are strips of torn material about 6 inches (15 cm) long and 1½ inches (4cm) wide. In the past they were 'rags' because they were never bought specially for the purpose but were cut from bits of wornout clothing or sheeting. There was no shortage of these because women did much more sewing and dressmaking than in later years.

Rag curlers have a number of advantages:

They were what my grandmother used overnight and were the only curlers ever inflicted on me as a child. I had long hair in plaits and every night my hair was re-plaited with the ends put into rag curlers.

How to make a rag curl

One rag was needed for each curl.

Each rag was folded over the end of a length of hair to grip it. The rag was then wound over and over on itself and the ends were tied in a knot.

As I had plaits, I only had to sleep with two rags, one at the end of each plait, and used this way they were not uncomfortable because the plaits could be arranged so that they were not lain on.

Today rag curls are little more than a fun thing, but in the past they they were very popular indeed. But they were not the complete answer to curling hair.

I never knew anyone who had rag curlers put in all over their heads, although they are commonly shown this way in period films. Used in this way, they would have been far too uncomfortable in bed. Curlers were actually placed round the edge of the head so as to be less lumpy for sleeping on, and is almost certainly why hair styles were usually fairly straight with curls just at the ends. Have a look at the photos on the hair styles page to see what I mean.

Another misrepresentation in period films is that the rags are always shown as white. In practice they were made from any spare bits of material.