Based on experiences at Copthall County Grammar School, north London in the 1950s

The attention paid to school uniform by Copthall County Grammar School in the 1950s was probably typical of the attention paid to school uniform by most British grammar schools at that time. School uniform was deemed particularly important for outdoor wear, because of the public seeing it, and we girls were expected to give a good impression. In fact, failure to wear the school beret on a journey to and from school was a common way to get a detention - if of course a teacher happened to spot it.

The school colours were navy blue, green and white.

The school outfitter came to the school regularly to take orders for new items. 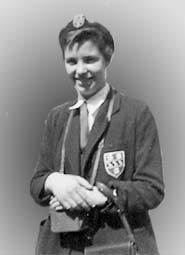 Left: Gabardine mackintosh, known as a mac, worn with typical long socks, Photo courtesy of Marilyn Ormson. Note the long plaits, often known as pigtails, tied up with ribbons which were also typical of the time.

Right: This photo was taken on a school outing of probably unusual weather, as it shows the blouse and tie of the winter uniform worn with a school blazer and school beret.

Coats had to be navy blue gabardine, a tough, tightly woven twill fabric, which was reasonably shower-proof. Such coats - or macs as they were called - were widely popular for children and I seem to remember that the school allowed them to be bought anywhere. The same went for the navy blue gloves, white socks and sensible brown shoes. Scarves and berets, though, had to be bought from the school outfitter because they were unique to the school. The scarves were close knitted navy blue wool with a band of green at each end, sandwiched between narrower bands of white, and the berets had the school badge at the front. I am wearing the beret in the top right photo.

Not quite as much attention seemed to be paid to the uniform that we wore underneath our outdoor clothes, probably because the public didn't normally see it. Everyone wore a navy pinafore dress / tunic, a white blouse and a green tie, but only the tie had to be bought at the official outfitters. It was quite a feature. It was a shiny green, and as there were little or no man-made fabrics, I suppose that it must have been made of silk. What, in my view, rather detracted from the appearance of the indoor uniforms was that the cardigans could come from anywhere as long as they were navy blue. People were still suffering from the austerity of the war years and many of the cardigans were hand-knitted to different patterns in different wool thicknesses and in colours that illustrated the wide range of tints that could just be called navy blue.

Because man-made fibres were yet to come into common use, the pinafore dresses and cardigans were made of wool. Wool, at that time, shrunk when washed. So the pinafore dresses and cardigans had to be sent to the dry cleaners. This was expensive and time-consuming. So it was not uncommon for it to happen three times a year, in the school holidays. Between times, marks were simply sponged off. Fortunately the navy blue didn't easily look grubby, and the underwear and blouses were washed as often then as they would be today.

Girls in the sixth form were allowed to wear navy skirts instead of pinafore dresses, and I rather think that they were also allowed to leave off their berets out of doors, but I am not sure of this.

All clothes had to be marked with the owner's name. The standard way was to sew in Cash's name tapes. There were regular inspections.

Watches were forbidden, but at that time they were very expensive, being clockwork rather than digital. So perhaps it was understandable.

Another thing that rather detracted from the uniformity of the uniform was that the school dresses for summer could be red, blue or green stripe on a white background. They did, though, all have to be the same material and style, which meant that either the dresses themselves or the material for making them had to come from the school outfitter.

A striped summer dress worn with the school blazer.
Tap/click to enlarge to see the stripes more clearly.

The school blazer worn with a striped summer dress.

Tap/click to enlarge to see the badge more clearly. 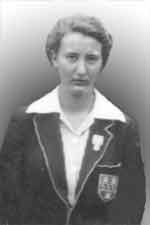 Prefect's blazer - taken from a school photo -  identifiable by the pale green silk cord along the edges.


My mother, like many mothers in those years of austerity, always made my summer dresses, but it was a difficult task because the required material was moygashel which frayed very badly indeed. Numerous mothers must have complained, as in later years the fabric was changed to a lighter weight cotton. The three colours, though, were still allowed, which did strike me as strange.

On the journeys to and from school, we were encouraged to wear our navy blue school blazers. These showed the school badge on the front pockets. The blazers really did look smart and they were the same on all the girls because they also had to come from the school outfitter. When it was too hot for blazers, though, those non-identical cardigans came out for all to see.

Uniform for games and gym

For games, we had shirts of the same green as the ties, and - I think - navy blue shorts, which were really more like divided shirts. It is interesting, though, that I don't remember this well, as games was far from being a favourite subject of mine!

For PE/gym we had the same green shirts and navy blue knickers.

The school had a strange requirement for where we were to keep our money. It is understandable that money should be kept on our persons, but the means of so doing was rather bizarre. We were supposed to have an elastic belt inside our dresses or tunics and from it suspend our purses on a tape.

When the new first year girls arrived at the school, they were duly kitted out with such purses, as required. However, it didn't last long. Can you imagine having to lift your skirt to get out your money or season ticket on a bus to and from school! So I suppose we just kept our purses in our satchels and hoped for the best. I never knew of any money going missing. Neither did I know of the purses rule ever being reinforced. I suppose it was just to cover the school's back if money ever did go missing.

Larger objects than money were carried between home and school in a school satchel. This was rather like a small, but extra wide rucksack, and was worn in the same way. In the early years of my time at Copthall, satchels were made of leather and were very heavy. Later, though, there were lighter ones made of canvas, still of the same shape.

Changes in the school uniform in the 1960s

While I was in the fifth form at Copthall, which must have been 1957 or 1958, Barbara Cartland, the novelist, instigated some discussion about how awful school uniforms were. She said that they were not pretty enough. The Daily Express picked it up, and Norman Hartnell was asked to design something more flattering. I was summoned to Daisy's office where she asked me if I knew anything about the uniform that Hartnell had designed. I did. So I was told to smarten myself up and was sent home early to be collected and driven to Alexandra Palace. That evening I appeared on BBC TV with Hartnell and Raine (later Spencer) where I told them what I thought about the new design. I said it was very impractical with its big white collar, although I did like the hat. Four years later my path crossed with Hartnell again when I won the Fashion Show at London University representing UCL. A career in modelling was suggested, but I declined as I regarded my studies as more important. Daisy would have been proud! This was just before the Twiggy era.

Changes to school uniform in the 1960s

About 1963 the summer uniform changed into dresses with three different coloured stripes on white: pale green, beige and grey I can't remember. The fabric, I would imagine, was non-iron and washable. Quite wishy-washy really and not as smart as the earlier ones, I felt. From then on the uniform was bought over the counter from John Barnes in St. John's Wood. I think this may have happened when 'Daisy' left the school and we got a new Headmistress.


The school uniform which changed when Ida Frearson took over from Daisy was turquoise green, beige or grey stripes on white and was voluminous. Shoes had to be 'Clarks' in the 60's, but in 1965 there was a dearth of Clarks brown sandals, so that year black sandals were permissible.

Changes to school uniform in the 1980s

In the 1980s the Copthall school uniform that my oldest sister had was a yellow and white checked cheesecloth shirt and brown skirt. In about 1997, just before my other sister started, it became what is the now the current uniform that I wore, ie a black watch kilt, mint green blouse and navy blue v neck jumper with a green V around the neck. It was really lovely to read from your website how strict the uniform rules were and you'll be pleased to hear they barely changed, although they did relax quite a bit towards the end of my time. However, navy blue coats were strictly enforced!

I must offer a tiny correction to the Copthall uniform of the 1980s being a yellow and white checked cheesecloth shirt and brown skirt.

I attended the school from 1979 to 1986 when the uniform was a yellow and white gingham checked shirt (quite revolting) and a navy skirt. Brown was most certainly never a permitted colour! My reason for being so certain is that I got into a lot of trouble over the school uniform over a number of years, so I have it burnt into my memory, including being hauled in to the Deputy Head's office for my Copthall sweatshirt (from the school's own second hand stock) being 'the wrong shade of navy blue'. My mother said she had quite a bun fight about it!

We used to try and hide our shirts under our navy jumpers/cardigans, so that the collars were well out of sight, claiming that they attracted the bees and wasps ! (We really didnt like that yellow at all!)


If you were at Copthall around this time, you will probably like the pages on life in the 1940s and 50s - see the menu on the home page. Information and photos are always welcome.

I am grateful for additional information from Christine Tolton (formerly Christine Culley) and Julie Vanstone.

If any of my contemporaries can add further information or correct anything I have misremembered, please get in touch.