School dinners (lunches) in the austerity of 1950s UK

Based on experiences at Copthall County Grammar School, north London in the 1950s

I suppose that the main reason why school dinners were so awful in the 1950s must have been the UK's austerity in the aftermath of the Second World War. Rationing continued until July 1954, with meat the last to go. So I had four years of dreadful school dinners. 'Dinner' of course was the meal in the middle of the day. I don't remember anyone using the term 'lunch' much, if at all.

Collecting the money for the school dinners

The money for the school dinners was collected by the class teacher on Monday mornings after she had taken the register. It was a simple process, and as far as I remember involved every girl. (This was a grammar school for which all pupils had passed the 11+ exam from a wide catchment area, and most of us lived too far from the school to get home and mid-day.)

I can't remember there ever being any problems with pupils forgetting their dinner money or even needing change. We were a disciplined lot.

At the same time as the dinner money collection, there was a weekly collection for Save the Children Fund and occasional drives to raise money for other charities. These invariably involved collecting what were known as 'ship ha'pennies', laying them in lines and aiming to get longer lengths than other classes.

Ship ha'pennies were halfpennies that showed a ship on one side. They were less common than other halfpennies, but not at all rare, and they were worth so little that they were relatively easy for people to spare. So they were ideal for charity collections. Also a length of ship halfpennies carried a certain amusement. 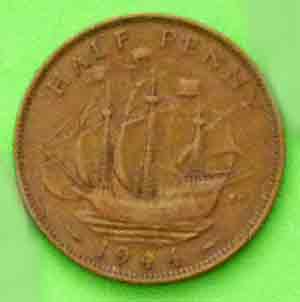 A row of ship halfpennies, as collected in charity drives 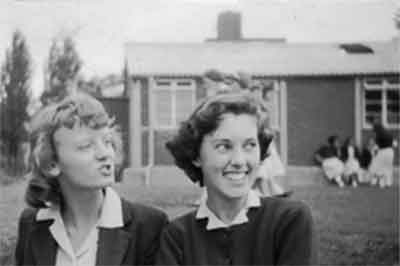 The school canteen in the background. Detail of photo courtesy of Sally Lawson (formerly Sally Porte) who is on the right.

We had our dinners in the school canteen which was outside the main building on the edge of the playing field - the most distant building in the aerial photograph.

Inside the canteen were rectangular tables of varnished wood, set against the walls, and seating - I think - four on each side and a 'head of table' at the end. We were assigned our tables for a year. I suspect that we were allowed to sit with one particular friend, but I can't remember the mechanism for this, but otherwise the policy was to mix the years. A member of the sixth form was assigned as the table head, presumably to keep order, but order was never a problem. I think that the mixing of the years worked well.

At one side of the canteen was the hatch from which the dinner ladies served the dinners.

The food at school dinners

Now for the really bad part - the food! As I mentioned, it was probably so awful because of rationing and the austerity in the aftermath of World War Two. Mince, ie minced beef, was on the menu every day along with boiled potatoes and a vegetable. Or perhaps I shouldn't use the word 'menu' because it implies a choice. There was no choice at all. The mince was probably supposed to be good for us because it supplied protein. However, not only was it inedible by today's standards because it was mainly fat, skin and gristle, considerable moral force was applied to make us eat it. What was more the dinners was not freshly cooked. They arrived at the school by lorry in large containers.

Prefects took it in turns to stand by a bin for left-overs as we filed past to stack our plates and queue for pudding. If the prefect deemed that what we were leaving was edible, we were sent back to eat it. Many a time, we swallowed gristle with lots of water as if were a huge pill.

School dinner afters were usually puddings of some sort. They were pleasant enough and very filling. They were always served with thin custard. We called them 'stodge'.

Drink was always water, supplied in jugs on the tables.

You may wonder if meals were better at home in spite of the rationing. Nutritionally, probably not, but if we didn't want something, we didn't have to have it. This may have meant that we went short of certain nutrients, but we never went so short for it to be a problem.

Around my third or fourth year, I managed to persuade my class teacher that I was a vegetarian. For some reason she didn't question it, although it was school policy for her to require some sort of document for confirmation. From then on my school dinners were quite pleasant, in that the mince was replaced by mashed potato in a pastry case topped with cooked cheese. Of course around that time, rationing stopped anyway.

In the 1960s, school dinners were ordered for those on the roll call the previous day. So if more pupils were in school than the day before, the last table to be served had tinned pilchards.


An aside and query for Scottish readers

The information in the following box from Douglas Adam is about school dinners in a Glasgow school during WW2 and what are generally known as the 'years if austerity after the war' when school dinners in England were really bad. Yet his school dinners were luxurious by our English standards. If you know why, please get in touch. Douglas's only suggestion is that it was a fee-paying school and maybe someone might have known someone with connections - but in England the food simply wasn't there.


Food at school dinners in Glasgow 1944 and the years following

The pupil count was about twice the capacity of the school meal capability, so on alternate weeks pupils used the main hall cafeteria and paid cash.

Second week: The hot cooked meals alternated between a main course of meat/fish veg and potato plus desert custard/semolina/tapioca plus rhubarb/pears every second day. Then on the other day: soup and main course. The cost increased from 1/9d to 2/7d as I remember.

As you can see we didn't go hungry or exist on bread and water.

As everyone stayed for school dinners at my school, the canteen could not house us all. So there were two sittings. This meant that, depending on which sitting we were assigned, our mid-day break came either before or after our meal.

It was the policy of the school that all the girls except the sixth form had to be outside during the mid-day break. This was torture in the winter when it was really far too cold. I suppose that the idea was that we were expected to 'wrap up well and run around to keep warm', but we were really too old to want to do this. The mid-morning breaks were not so bad because they were shorter. We would long for rain because then we were allowed to stay inside.

When it was raining, the mid-day break was in the Hall, with music for ballroom dancing. I hardly remember this, as dancing with another female did not appeal to me, but I do remember being taught ballroom dancing as part of the curriculum. We had to take it in turns to do the leading as the man.

While I was at Copthall (1953-1960) there certainly was ballroom dancing in the Hall when we couldn't go out at dinner break-time. We could play our own records - until Bill Haley and Rock Around the Clock came out. This was considered unsuitable for young ladies, and jiving was banned.

It was not uncommon to be given a detention for trying to hide in a cloakroom during a break when it was really cold. That was where we hung our coats. The lavatories were outside in the nearest block in the aerial photograph. They were unheated but at least provided some respite from cold winds.

If the mid-day break was unpleasant for us girls in winter, it must have been even worse for the teacher who had to stand around to watch over us. I think the teachers had a rota for this.

If you were at Copthall around this time, you will probably like the pages on life in the 1940s and 50s - see the top menu on the home page.