One of the main spearheads of the Government Campaign to keep Britain fed in World War Two was rationing. It started on the 8th of January 1940, four months after the outbreak of war and didn't end completely until 1954.

Stages in setting up WW2 rationing 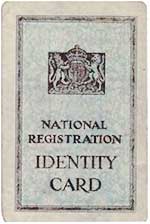 Everybody had to get an identity card.

To do this, the women collected together the whole family's birth certificates, and took them to their local church hall or school or somewhere similar, rather like the usage of buildings as polling stations today.

The women then took their ration books along to their local grocers and butchers to register with them.

A ration book contained coupons, which were very small squares, one for each week. These were for what the Ministry of Food considered to be our basic needs, which were tea, cheese, butter, margarine, bacon, porridge, wheat flakes and shredded wheat, lard, sugar and eggs.

Stage 4 - at the grocers

Each week the women went to their appointed grocer's shop, handed the grocer the families' ration books and he would cut out that week's coupons. These coupons were then sent to the Ministry of Food to be counted. That way they could calculate just how much that grocer's future supplies should be.

You were given what the grocer had been supplied with. Some weeks there would be wheat flakes, other weeks it would be loose porridge.

Biscuits came loose and a weekly allowance per person was announced on the radio and in the newspapers. There was very little choice, you got what was available.

I remember just standing at the grocers with my mother. She handed him the books, he put our rations on the counter and not a word would be spoken. There was no point, as everyone had to have whatever the grocer had that week. There was no alternative.

Stage 4 - at the butchers

Once families had registered with a butcher, they would wait in queues each week to collect their meat ration. There was little choice. The butcher could only sell what he had been issued with. Again the weekly coupons would be cut out. Meat ration was by price: For example, you could have a tiny amount of fillet steak if available, which it seldom was, or more of stewing steak.

All food, milk and meat prices were set by the Ministry of Food. So a pint of milk, a loaf of bread, or a jar of jam was the same price in every shop in the UK.

Although we did not have to register at any particular shop for sweets, we usually went to the nearest one where they knew us. Throughout the war the ration was 4 oz per week per person. My family would go to our local newsagent as this was where there was the largest choice: row upon row of large glass jars of sweets every colour of the rainbow. Sweets were our big treat of the week and how we children spent our pocket money.

All food (with very few exceptions) was produced within this country, and accordingly varied with the season. The Ministry of Food would announce on the radio and in the newspapers that the week's ration per person was going up or down depending on current supplies.

During the first two years of the war, America did not take part as they were neutral. We British were on our own and our biggest and best friend was Canada. It supplied us with vital supplies from day one and at great risk to its merchant seamen. It was in these first two years of the war that the Germans with the submarines tried to starve this country into submission, and Canada came to our rescue. Today, freedom gives us choice. As we have a choice, we are fussy. Had the Germans managed to invade our country, I hate to think what choice they would have given us. The history books tell what the did in the rest of Europe.

Petrol was not on sale for private use, only for work deemed essential. A permit was needed to obtain it. Cars were therefore few and far between. All large cars were confiscated and converted into vans and ambulances. See more on petrol coupons.

Ration books came in different colours, but the only ones which I remember were buff coloured for adults and blue for older children (between five and 16 years old). I understand that there were also green ration books for children under five, pregnant women and nursing mothers, who had first choice of fruit, a daily pint of milk and a double supply of eggs.

Ration books contained coupons that shops either cut out or crossed out when rationed items were bought.

When I asked my mother whether she was frightened that Germany might win the war, she said she didn't think about that at all. She would think only about rationing, how to get the shopping done with all the long queues and what she could cook that night. What seems trivial now was vital then. 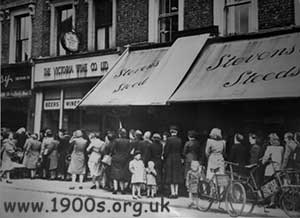 Ration books were guarded very carefully. Once my mother left hers on the shop counter of Maynards the sweet shop, and when she went back the assistants denied all knowledge of it. My mother got very upset but I never knew the outcome.

It is only in later years that I have come to appreciate quite how severe the rationing was. I am told that each adult was allowed one egg per week, 2 oz of bacon, 2 oz of margarine and 2 oz of tea - although the actual amounts varied week by week according to availability . Butter was reserved for children under five and pregnant and nursing women. Everyone else had margarine - the hard cooking sort, not the soft spreads. (Various websites give full details of ration allowances in the Second World War and its aftermath which I won't repeat here and which I never knew at the time anyway.)

Eggs were available widely in rural areas where people could keep hens, but that wasn't practical where I lived.

Fortunately potatoes, other non-imported vegetables and bread were not rationed, although they were often simply not available or rationed by shops according to what was in stock.

My mother always said that large families were more able to cope because the women could do more with what they were allowed. "One bit of food works in with another", she used to say.

My friends and I knew nothing of luxury foods, and probably grew up healthier as a result. A glance at my class photo from around the end of the war will confirm that none of us carried any excess weight or were undernourished. 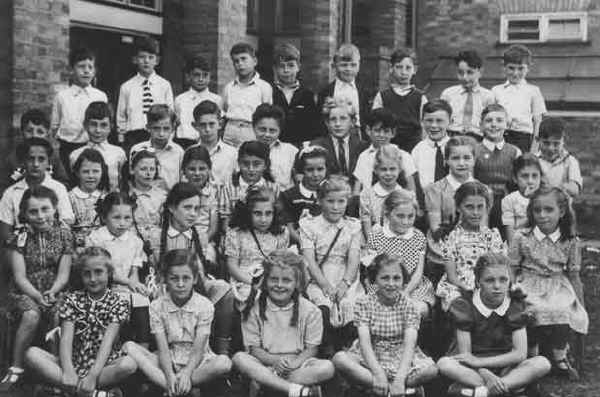 I have no recollections at all of going without food, clothes or toys, or of being particularly hungry. I suppose that that meant that rationing really did work, with everyone getting what they needed, if not what they wanted. It was the adults who complained about having to go without, because they remembered pre-war times and almost certainly - without us children realising - went without for our sakes.

Examples of the severity of rationing

The following is an example of the severity of rationing but the amounts shown here would have varied from week to week.

An adult's margarine ration in WW2

An adult's weekly margarine ration of 2 oz was just less than a quarter of a standard UK pack of 500 grams - and there was no butter.

An adult's sugar ration in WW2

It would take about four months of an adult's sugar ration to fill a standard UK kilo bag of sugar.

My husband remembers his mother registering him as a vegetarian so as to get extra cheese. Apparently this more than compensated for the loss of meat, and the rest of the family shared their meat and cheese anyway. I suspect that my mother probably registered me as a vegetarian too, but I can't be sure.