Pig swill: a UK initiative to help feed people in and after WW2

One initiative to help the country feed people in World War Two was  through what was called pig swill. It was made with scaps of food not considered suitable for human consumption and it was fed it to pigs for bacon and pork. Apparently pigs can cope fairly easily with such scraps and of course their meat is delicious. 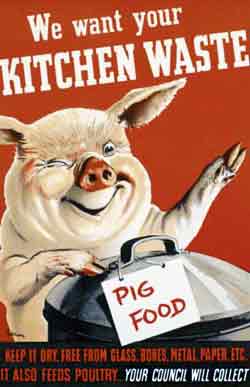 The initiative was particularly aimed at canteens, restaurants and hospitals but ordinary families participated. by bringing their food scraps to a local collection point.

Food waste collection for pig swill was in operation in Edgware while I was growing up. I don't remember it, though, as the public bins were not on our route to the shops. Christine Tolton recollects them along Edgwarebury Lane, which was a well-used thoroughfare leading out from the centre of Edgware with housing on both sides and with roads of houses at intervals leading off it. The location must have been ideal as numerous women would not have been far from a bin. 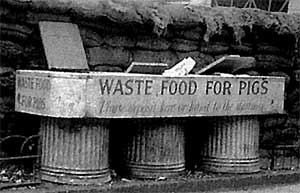 A bin for food waste for pigs, photographed in the Imperial War Museum. Although there must have been various containers, this one looks a modern mock-up.

There were bins attached to the lampposts along Edgwarebury Lane, Edgware which were for everyone to drop in their left-over food scraps for pig swill. They had their own farmyard fragrance, hard to describe, but I can still smell it! A sort of vegetative barnyard.

How the pig swill system worked

Can I remember the collection of waste food! I can still smell it!

In the wider area of Edmonton, north London, where I lived during the Second World War, the bins for the waste food collection were provided by the council. They were large, heavy metal, galvanized ones, rather like milk churns or heavy duty dustbins, and they had heavy lids to keep out flies. They were spaced out along streets so that each bin was shared by a number of households. Factories, hospitals and canteens also had bins.

All sorts of food waste went into the buckets, from vegetable peelings to scraps of meat, all carried out unwrapped in household buckets or bowls.

The waste was emptied into large tanks on the back of trucks, which came along on a regular basis, and the waste was transported to processing plants around London. In Edmonton our local processing plant was in Park View Road, Tottenham. The rich aroma could be smelt for miles around.

At a local centre, the waste was poured into trays and baked to sterilise it. At this stage it was solid, in appearance and resembled bread pudding - known to us locals as Tottenham Pudding.

The 'pudding' was then sold to pig farmers who added water to it to feed their pigs.

This type of recycling continued like this until the mid 1950s. I'm not sure why it was discontinued - maybe the cost of production, or the cheap imports of Danish bacon that took place around the time.


An adventure in pig swill!

There were pig swill bins at the top of our street in Edgware. One was tied to the last tree close to the intersection of Vancouver Road and Bacon Lane.

It must have been around 1947 or 48, and I was 5 or 6 years old. One day, we kids were playing 'Tin Can Copper' in the street. This involved throwing an old tin can and everyone hiding. The tin can was thrown and everyone dashed off. Some hid among the street trees, now long gone, and I was the last to hide. Without thinking, I saw the pig swill bin, ran over to it, threw the lid off and jumped right in. Being so small, I could fit in.

There was a sudden splash as I launched myself in - and then the smell hit me! I was soaked in pig swill. The worst part was walking back home to number 79 Vancouver Road, and confronting my mother!

The Government announced today that it will ban pig swill, identified as a key link in the chain of infection which spread foot-and-mouth disease across the country.