One of the spearheads of the Government campaign to make Britain more self-sufficient for food was to encourage the public to grow vegetables in their gardens and where possible allotments. For this, they needed to sow seeds in the most efficient way for the highest productivity. The techniques they used were those which had been in families for generations. They just became more significant in wartime.

Seed potatoes and grain could usually be sown in prepared open ground, nourished by the soil and rain. Then just ignored until harvest time.

Most vegetable seeds required care. There were no plastic seed trays at the time of World War Two. (They did not come into the shops until the mid 1950s.) So seed trays were roughly made of cheap wood.

Some seeds were sown directly into pots. In order to get as many of these as possible into a small space, the accepted containers were tiny clay pots, known as 'thumbs', which measured only about 3 cm at their widest point. (These were produced in potteries in areas of naturally occurring clay. Where there were no potteries, the pots were delivered by road or rail.) 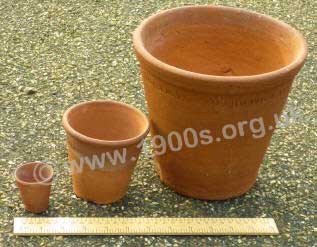 Three clay pots of increasing size. The smallest, known as a 'thumbs' was for very young seedlings. The ruler is a foot long, ie 30.48 centimetres.

Clay pots were porous which was said to be good for seeds and plants because it allowed them to 'breathe' although the belief of this is open to question in view of the later success of plastic flower pots.

Clay pots were very brittle, so they broke easily. Also, because they were produced in such quantity, they were normally made from clay which contained bits of grit. This made the surface uneven and trapped water which, when it turned to ice in freezing conditions, expanded and caused cracking. So the clay pots had to be cared for carefully and stored somewhere away from frost.

Seed merchants and Allotment Association shops may at times have sold suitable seed compost, but it was not readily available in wartime. So people had to be creative. 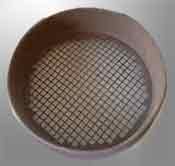 As the seedlings grew, they were moved into progressively larger clay pots until it was time for them to go into open ground.

There was no shortage of broken pottery to use as 'crocks' for drainage in the larger pots because previous years' pots would have been broken up by frost or accidental dropping.

Fertilizing and watering the growing plants

During the war period, there was an unwritten law that if the horse was outside your house when he did his business, then it belonged to you. It was an excellent source of manure, as most things were delivered by horse drawn vehicles. So everybody had a shovel and bucket ready for action. As a horse came down the street, everybody would be waiting see if he did his business. If he did outside your house, it was rather like winning the lottery. 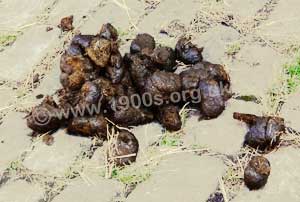 Horse droppings, ready to be shovelled up and used for manure

Most people had a water butt in the back garden. This was either an old beer barrel or an oil drum. The fresh horse manure was put into an old sack and suspended in the water. The result was a deep brown liquid similar to Baby Bio plant feed and was later put onto the soil with a tin watering can - again, no plastics. 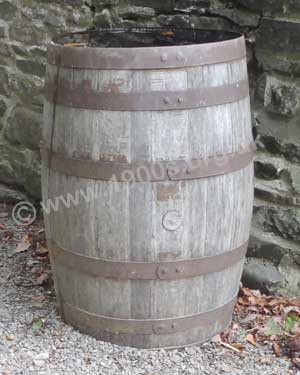 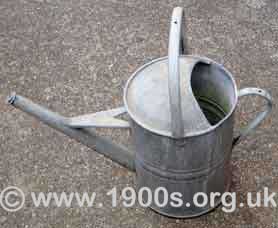 Old tin watering can used before the advent of plastics

Something that was common but never spoken of in history books was the use of urine. Most people had a bucket in the air raid shelter, or a chamber pot under the bed. Urine was collected to be diluted and watered around the base of growing vegetables. Many parts of the world such as China still do this on a vast scale. Even today people put diluted urine on their lawns to obtain a fantastic green colour.

I just remember my mother collecting horse droppings, as described by Peter Johnson, while the dairy still delivered by horse and cart.

Fertilisers were in short supply, but it was normal to have a compost heap or bin in the garden. Vegetable waste, weeds and any chicken and rabbit manure were all added, which by the next year had turned into good compost.

Leaves rotted down more slowly, so they tended to be composted separately into leaf mould.