Roast potatoes and root vegetables with that old-fashioned taste

Based on watching my older family cook in my childhood

The skill of producing that old-fashioned taste seems to be largely lost as I have tasted some pretty bland roast meals in recent years. This page describes how to prepare and cook roast potatoes and other root vegetables which do have that old-fashioned taste. I learnt how from conversations years ago with aunts who were quite elderly at the time, and over the years I have refined and I hope improved what they told me by developing easier ways of producing the same taste. For how to cook the other constituents of a roast meal, see the above menu. Of fundamental importance is the fat, i.e. the dripping so you may like to read the page about that first.

No roast meal is complete without roast potatoes. Tasty roast potatoes take elapsed time so preparing them needs to be the first task of preparing the meal. I start just after breakfast for a lunch-time roast. This does not mean that the meal will take all morning to prepare, just that I feel more in control if some things are done early.

The potatoes need to be peeled in the normal way and cut into pieces. You will have to judge sizes yourself. Small pieces will be tastiest because there will be more crisp outside to soft inside, but larger pieces are more suitable for people who can't take a lot of fat or are likely to eat a lot.

Parboil the potato pieces. The aim is to cook just the outside so that it is fluffy or can be fluffed up. I find that five or six minutes is enough, but use your judgement as much depends on the variety and age of the potatoes.

Remove the potatoes, drain them (but keep the potato water for the gravy) and leave them to cool and dry. If you leave out this step and try to roast the potatoes while still wet they will be too hot to handle for fluffing up and also take much longer for the outsides to get crisp.

When cool enough to handle, fluff the outsides of the potatoes up if they need it. They may not, depending on the type of potato, but most types do. Use a fork to score all over their surfaces. 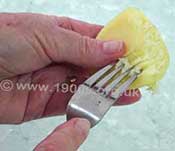 Fluffing up the cooled parboiled potatoes with a fork

About an hour to an hour and a half before serving, arrange the cold, fluffed up potatoes around the roasting meat, salt them if you like, and baste them with the hot fat in the roasting pan. If there is not enough fat from the meat, use your home-made dripping.

Continue basting every so often, as a rough guide every 30 - 40 minutes.

If the potatoes look ready too early, take them out and put them back to reheat later while the roast meat is resting. All roast meat needs to rest, i.e. to be taken out of the oven 20 minutes or so before serving. This makes it easier to carve and more tender. With a largish joint or a chicken, it will still be hot enough for the table.

Using the resting time for finalising the roast potatoes is an excellent use of oven space.

In my view no roast meal is complete without roast parsnips. If you don't like boiled parsnips, don't be misled. Once roasted, the taste is entirely different.

The method is similar to roasting potatoes but with the following exceptions:

Raw peeled parsnips float in cold water and the exposed parts go black. So parsnips need to be cooked as soon as possible after they are peeled. 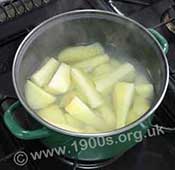 Potatoes and parsnips boiling together. You will have to look hard for the potatoes because I always do far more parsnips than potatoes.

Once peeled, it is best to cut the parsnips lengthways. Small parsnips can just be cut across in two, but large ones need to be cut into several lengthways pieces.

Parboil the parsnips in the potato water which should be still hot. (This gives even more flavour to the water which will later be used for the gravy. I tend to put the parships in for the last few minutes with the boiling potatoes, but you can do them separately if you prefer, but do use the same water. Parsnips hardly take any time at all for the outsides to seal, but if you don't do it, you will get a tough rather than a crisp outside.

The outsides of the parboiled parsnips do not need to be fluffed up like potatoes. They can be roasted around the roast meat just as soon as they are drained and dry. Turn them and baste them as for the potatoes.

Parsnips do not take as long as potatoes to roast. So about 35 minutes to an hour should be enough, but much depends on how dry they are and the size of the parsnip pieces. If necessary they can be taken out early and reheated as described above for potatoes.

Just as with parsnips, in my view no roast meal is complete without roast sweet potatoes.

The method is similar to roasting potatoes and parsnips but with the following points to note:

Choose fairly elongated sweet potatoes and after peeling cut them into slices just over 2 - 3cm thick. If you peel them some time in advance, put them in a bowl of water to prevent them drying out, but remove them in time for them to dry off before roasting.

A long narrow sweet potato is easier to manage than other shapes.

Sweet potatoes do not need parboiling or scoring and they roast even more quickly than parsnips. I find that 40 minutes is enough, but use your judgement as there can be all sorts of things that upset timing. It is essential to remember to turn and baste them.

The easy way to baste

I find a baster essential for basting. Some people manage by using a spoon to collect the fat while tilting the roasting pan, but I can't get such good results that way. The pan is too full to get the spoon in and it doesn't pick up enough fat anyway. The baster I use is the tube sort with a sucker/squeazer at one end, as shown in the photo. I use kitchen tongs to turn the potatoes and parsnips.

Basting. The photo shows the stage where the parsnips have just been put in and are not yet crisped. The potatoes, having been in for some time are beginning to crisp.

I knew one old lady who told me how wonderful the roast beetroots of her childhood were. I did try them a few times, but with poor results. The red juice made the rest of the meal look unpleasant and the result was chewy. If you have had better experiences I should be pleased to try out your method.

As roast parsnips are so good, it might seem that roast carrots would also be good. However, they don't work for me and I have given up trying. Again, though, if you have got good results, I should be pleased to try out your method.