Based on watching my older family cook in my childhood

Dripping features in the preparation of most savoury meals that have that good old-fashioned taste.

Dripping has a wonderful flavour that no amount of herbs, spices or stock cubes can emulate. It is perfect for frying meat, roasting vegetables and for adding flavour to cooked dishes. In times gone by it was a staple meal for children, spread on bread, and it is sad that few children of today have ever sampled 'bread and dripping'.

What is beef dripping?

Dripping is the fat that drips from a joint during roasting and has solidified.

Why beef dripping? Before battery chickens and imported lamb became commonplace, beef dripping was effectively the only dripping. It gained its popularity because families traditionally had a large joint of roast beef every Sunday. So nowadays the terms 'beef dripping' and 'dripping' tend to be used interchangeably. Strictly speaking, though, dripping can be made from any fatty meat.

Beef dripping was and still is regarded as the best tasting of all the drippings. In fact, any mention of just 'dripping' invariably implies 'beef dripping'.

How to make beef dripping the traditional way

Dripping was simply made by pouring the hot fat left over from the roasting pan into a heatproof glazed china basin, covering it to keep out flies and dust and leaving it to cool and solidify. The basin was then stored in the food safe.

Once solidified, any dirty bits of charred meat always sunk to the bottom of the basin and were dug out or scraped off and thrown away. Alternatively the rendered fat was 'clarified'.

Clarifying and storing the dripping

If clarifying is required, it is done before the fat has set by adding boiling water. I like to do the first stage of clarifying while the remains of the roast meat are still in the pan because it helps to clean the pan while also preventing wastage.

After enjoying the roast meal with my family, I pour boiling water into the tin that the meat was roasted in, still with its messy fatty remains and heat it up again on the hob. As the water boils, I stir while scraping the bottom of the pan with a flat wooden spatula. This goes a long way towards cleaning the pan for the eventual washing up while loosening as much as possible of the remains of the cooking.

Stirring fat and water in roasting pan to clarify the fat and clean the pan. The flat-ended spatula is essential for this.

Heatproof dishes have come a long way since the popularity of the glazed china basins in my mother's and grandmother's time. So rather than using a china basin for the clarification, I use a heatproof glass basin. This allows me to see how much dripping has been produced, how dirty it is and whether extra boiling water is required for clarifying.

I pour the boiling contents of the pan into the basin and add more boiling water if necessary. Then I put on a lid or just a place and leave to cool. During this time, the water and charred bits sink to the bottom of the basin, leaving the clean clarified fat, which is now called dripping, on top. Then the basin and its contents either go into the fridge for immediate use or, more usually, the dripping is removed and put into the freezer for later use.

I use the frozen dripping mainly for basting the potatoes, parsnips and sweet potatoes of a later roast meal. For such cooking purposes the frozen dripping can be used straight from the freezer, although beef dripping for 'bread and dripping' needs to be softened at room temperature first.

I find that a fork is the best tool for gouging out lumps of hard frozen dripping. 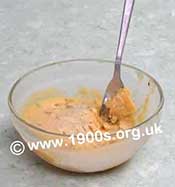 Frozen dripping being gorged out with a fork.

What to do with the water from clarification

What may look like water at the bottom of the basin can turn out to be nutritious and flavoursome meat jelly which can be added to sources and gravies. 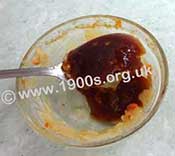 Meat jelly from under the dripping.

So in general I don't pour off the water/jelly immediately but freeze the dripping in the clarifying bowl with its water/jelly still present. If the 'water' turns out to be floppy jelly, I separate it, remove any bits and use it in gravy or stews. If it is just dirty ice, I simply throw it away.

As an alternative, you can use what is known as a 'gravy separator' for the clarification. The spout is at the bottom of the separator rather than the top as with a normal just, so, once the fat has settled on top, the water can be poured away leaving the clarified fat.

Gravy separator which can also be used for separating rendered fat from meat jelly or clarifying water.

Why home-made dripping has gone out of fashion

Dripping has gone out of fashion for several reasons, in particular:

I love dripping, but that's not the only reason I make it. It's also to minimise messy washing up after cooking a roast. Also I store my dripping safely, as already explained.

How to make beef dripping: shortcuts

It is no longer reasonable to make much dripping the traditional way.

Not only do few of us have large joints of roast beef every week, farmed animals have been bred to be as lean as possible. Also today's roast meals are more often made with poultry or meats other than fatty beef. Furthermore large supermarkets tell me that they are no longer allowed to sell their own off-cuts of beef or fat.

However you can still make and freeze a little dripping to flavour meals using your own fatty off-cuts from whatever meats are to hand. I am always on the lookout for meat fat of a sort that will make tasty dripping. I make the off-cuts by trimming off the fatty bits off the likes of braising steak, ham, lamb chops and pork joints, etc which would otherwise be left uneaten on people's plates. (Not entirely beef, you will notice, but they still work well. Incidentally, as lamb is widely bought for roasts today, people do make lamb dripping, just from lamb. In my view it is a little too rich.)

It is easiest to prepare the off-cuts using kitchen scissors rather than a kitchen knife. I build up a store of them in the freezer which keeps them fresh. 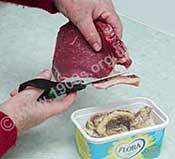 Off-cuts can similarly be made from braising steak, ham, lamb chops and pork joints, etc. Note the use of kitchen scissors rather than a knife.

Usually I make my off-cuts before cooking but within the family I have been known to add the better-looking leftovers from plates. 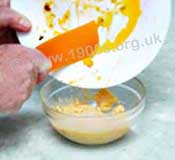 Cooked fat left on a serving plate being added to dripping. The fat in this picture is from lasagna which explains the orange colour which is from tomato.

When preparing the next roast meal, I use my off-cuts straight from the freezer by placing them over the raw meat before it goes into the oven. It isn't necessary to thaw the off-cuts before use as they thaw very quickly in the oven. This renders them down into liquid fat in the cooking pan as well as crisping the outside of the joint. This use of offcuts replaces the foil covering which is usually recommended. 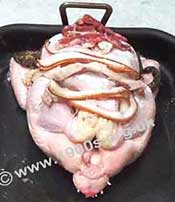 The roasted off-cuts give a good flavour to the roast vegetables around chicken, but the roast generally needs more fat than the off-cuts can provide. As the extra fat added by most people is normally oil, the residue in the pan is not suitable for dripping, as it will never solidify. Use it instead in the accompanying gravy.

I have from time-to-time bought dripping from supermarkets, but it has usually got thrown away. It does not seem to have the taste of home-made-dripping.