As there were no lightweight, non-stick, cooking pots in Victorian and Edwardian times, cast iron and copper had to be used.

The use of cast iron made pots very heavy. They usually had long handles, so that they could be lifted with two hands which made them even more heavy. 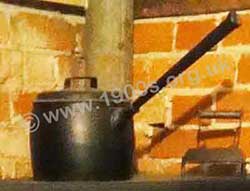 Cast iron, being a good heat conductor, made the handles very hot in use. So they were normally held through a wrapped cloth. 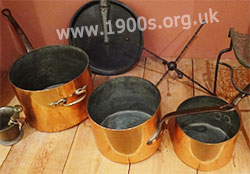 Copper was a better conductor of heat than cast iron. So copper pots could be made thinner than cast iron ones. This made them lighter and they cooked more quicker.

However, copper was much more expensive. So it was mainly found in reasonably well-off homes, and cast iron continued its use in the houses of ordinary people.

As there were no non-stick surfaces, it was very hard and time-consuming to clean a saucepan after use, as I remember from experience and to my cost in the 1940s and early 1950s. 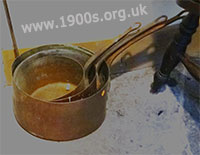 Copper pots left to tarnish. If left too long, they look darker still.

To clean these old pots, we scraped off as much as we could, then used scouring powder (Vim or Ajax) and wire wool. It was very hard work and rather put us off cooking foods that stuck badly like scrambled egg. Only shortly afterwards did rubber gloves become available.

I understand that in Victorian stately homes, scullery maids were expected to clean saucepans by rubbing sand into them with their bare finger tips!

Also, as copper tarnished, the scullery maids had to polish the outsides of the pots too! One of the photos shows well-polished copper pots while another shows one that is tarnished.