In houses on our working class housing estate in the early 1900s, there were no fridges. So my mother always had to take steps to keep perishable food in good condition. Non-perishable food was kept in the dresser.

Perishable food such as meat, milk and butter were kept outside in the food safe, but it was still a problem to keep them fresh in very hot weather. So my mother had to resort to other measures:

The butter cooler and milk cooler 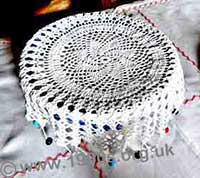 Home-made butter cooler, crocheted from porous cotton thread, made wet and weighed down with beads. (It was easier to crochet a perfect round than to knit one.) Photographed in the Black Country Museum.

The butter container was placed in a dish of water (not shown) so that the edges of the crocheted round dipped into the water. This kept the entire crochet wet, and the evaporation caused cooling. Flannel or muslin was often used instead of the crochet.

Milk was kept cool in the same way with a beaded porous fabric circle placed over the jug in a shallow dish of water. 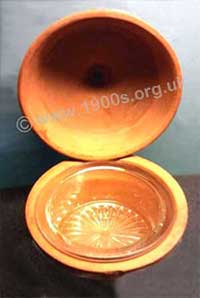 Commercial butter cooler made of porous fired clay. The base was stood in a dish of water, so that the outer clay container sucked up the water, becoming damp. This dampness evaporated which caused cooling, and accordingly cooled the butter in the glass dish inside. The glass dish could be removed for the table.

However - and it was a big however, although these arrangements normally worked well, they did not when the weather was humid, like in a heat wave before a storm. Then the water wouldn't evaporate, so the butter and milk weren't cooled and they went off.

Then my mother had to resort to other another measure:

Scalding milk to stop it souring

In very hot and humid weather, when the milk cooler didn't work, my mother 'scalded' the milk to make it last longer. This involved heating the milk in a saucepan to near boiling point and letting it cool. Doing this wasn't ideal, though, because it took the substance out of the milk and made a skin form on top. I very much liked the skin but most people didn't. Also if the saucepan was not quite clean or if the heat was too fierce, the milk took on an unpleasant burnt taste.

Fortunately the dairy might make several deliveries each day in summer, but even so, I would sometimes be sent along to the dairy with a jug to buy more milk because what we had had gone sour.

Meat could be kept in some form of butter cooler in hot weather, but when the humidity was high and the water in the cooler wouldn't evaporate, the meat would still go off. Many a time I saw my mother wipe the Sunday joint over with a vinegar rag before cooking it because it was beginning to smell.