Pickled eggs: How to preserve eggs in salt and vinegar

The following method of preserving eggs comes from someone who actual saw it done on a regular basis during the rationing and shortages of the Second World War. During this time, it was common to keep chickens, as it had been for generations in rural areas, so there was frequently a surplus of eggs which had to be preserved for leaner times. 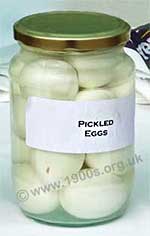 A family method for preserving eggs in salt and vinegar

My mother would preserve our eggs by boiling them for about ten minutes in water to which a little salt and vinegar had been added.

When the eggs were hard-boiled, they were held under the cold tap, which stopped a black ring around the yolk from forming. The shells were quickly removed and into preserving jars they went.

I can't remember ever using isinglass or waterglass.

For more about vinegar and its uses, see below.


The forerunner of scotch eggs

Some of these pickled eggs were covered in meat paste and breadcrumbs - hence the "scotch egg".

Writing this I can still smell that eggy-vinegar smell even now.

More about vinegar for preserving and its uses in the past

How vinegar used to be sold

Vinegar was sold 'loose' before around the middle of the 20th Century. You just took a container to the local shop and they would fill it up from a giant wooden barrel.

There were three types of vinegar: white and brown malt vinegar and pickling vinegar which was brown vinegar to which some hot spices had been added during manufacturer.