How waterglass was used to preserve eggs

Water glass is a sodium silicate solution that supposedly sealed the pores in the egg shells to stop them going bad. 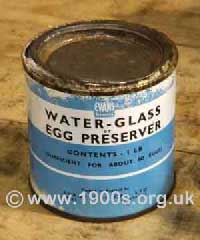 What waterglass is not

Water glass is not to be confused with isinglass which is made from fish swim bladders, and, in the old days, was used to clarify cloudy wine.

How to spell waterglass

Three spellings seem accepted: 'water glass', 'water-glass' and 'waterglass'. Although waterglass is still available on line or from specialist shops, you may have to try these alternative spellings.

How eggs were preserved using waterglass

We used to preserve eggs with waterglass in the war.

We bought the waterglass as a powder in a packet similar to that of a 2lb cardboard castor sugar packet. We poured the powder into a bucket and mixed in water until it reached the right consistency. It then looked rather like a cloudy grey and very liquid polycell wallpaper paste.

My mother had a large stoneware container with a lid. When she had any eggs to preserve, she simply poured the waterglass into it and lowered the eggs in one by one. Then she put the lid back on again.

I don't really know how long they could be kept, but at least a couple of months I think.

We didn't leave our eggs in the waterglass liquid but just painted each one and left it to dry before storing. Sometimes it was a few months before we ate any.

We had a stoneware jar of waterglass in the pantry. We didn't use it much, though, because we would really have needed to have a good source of eggs to make it worthwhile, and that meant keeping hens.

When I was a child in Fife in the 1950s, my grandparents kept poultry on a small commercial scale.

Over the winter months eggs production was lower so my Grandmother preserved eggs for winter using waterglass in internally glazed earthenware jars which held 10 to 15 Litres.

The eggs were first cleaned with dry steel wool, then rubbed with lard to 'seal the pores' and then added to the jars in layers to just below the level of the liquid. The last task was to put the lids on the jars. These varied from custom-made wooden lids with handles to thick china plates, and in one case an enamelled pot lid. So insulation seems not to have been an essential requirement - just to keep free of dust and insects.

When the eggs were required they were used in rotation, jar after jar. We only used them for baking, never for boiling, scrambling or frying, as I understood that the consistency of the egg white might be altered after storage and would not cook well.

Preserved this way, the eggs could last the whole winter in a cold outhouse. Over the months a secondary white 'shell' of waterglass could build up over the egg shells but this was harmless and was ignored. Very rarely did an egg 'go off' but this did not affect the others.

For many years I wondered what waterglass was because I had wondered if it was some old term that my mother made up. Then when I finally checked online, I found your site.

My mother was born in in 1911, and her family kept chickens. She told how, as a small girl, she hated most of anything in life having to go to the dark, cold cellar in the winter to get eggs from the crock of waterglass. It was not so bad getting the ones toward the top of the crock, but as time wore on she had to reach into the cold stuff up to her little shoulder. That made quite a lasting impression on her.


How we used the eggs preserved in waterglass

The eggs came out of water glass feeling slimy but as far as I can remember they were OK boiled. I preferred the dried egg for omelettes.

There were a few failures I remember, but most of the waterglass eggs tasted OK.

When we needed an egg, it was simply lifted from the liquid, washed, and used in the normal way. I don't remember that the eggs tasted any different from fresh ones.