meals
names and timings effects of gas supplies on cooking overview of meals in
WW2 more and more potatoes and veg hardly any meat fish if available eggs:
a food basic bread:
the national loaf desserts
and drinks

Eggs as a food basic in 1940s wartime Britain

Although eggs were rationed, they were probably the mainstay for protein in the rationing and shortages of the Second World War and the years of austerity afterwards.

The wide range of meals based on eggs 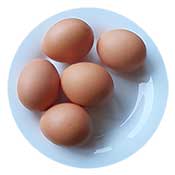 There was a lot that housewives could do with eggs. They could be boiled, fried, scrambled and used in baking. All produced nourishing and enjoyable meals.

Getting hold of fresh eggs

Most families with enough ground kept hens. Country people were more fortunate than townspeople in this respect, but even townspeople kept hens in the tiniest possible plots. Householders who kept hens, tended to have spare eggs which they could barter with those who had not.

We never kept hens because my mother had a horror of them.

I clearly remember my weekly egg ration, which was served as a boiled egg with 'soldiers'. 'Soldiers' was the name given to strips of bread and butter used to dip into the yolk of a boiled egg. At that time, though, the 'butter' would have been thinly spread margarine. I was too young to know the difference.

There was also dried egg powder which came from America and could be used in baking or for scrambled egg. The dried eggs came from the grocer we were registered with - in our case, Sainsburys. 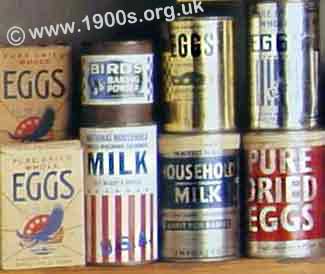 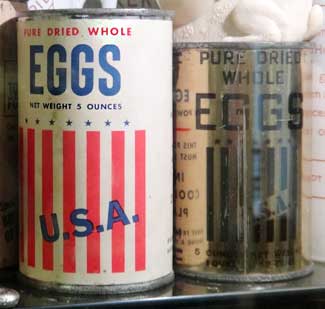 Tins and packets of dried eggs from the USA. Photographed in Eastbourne Museum of Shops.

At one time, the adult's ration of dried egg was equivalent to three eggs per week. Children were allowed twice as many.

What dried eggs looked like and how they were used

Dried eggs looked like custard powder. They came from America in small thick cardboard boxes printed with the American flag and covered in a waterproof wax coating for freshness. You put some in a bowl and added water or milk and a pinch of salt, whisked it up and poured it into a frying pan. The result looked like a pancake. To me it tasted wonderful.