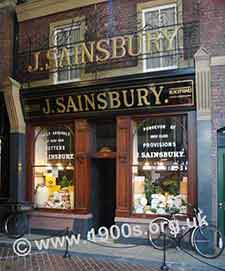 Life-size reconstruction of outside an old Sainsburys shop. Tap/click for a larger image.

There were several grocers when I was a child there in the 1940s. All were branches of chain stores, which is notable because chain stores had not yet come in for other types of shops. Some such shops may have had more than one branch, but not enough to be called chain stores. Sainsburys was one of the few grocery chain stores that still exist. Without the ropes, the first photo it would look just like the Sainsburys that I remember.

Why Sainsburys was so popular

My mother used Sainsburys more than any of the other grocers because she felt that the food was fresh, and she was registered there for our food rations. The place certainly looked fresh and clean.

The second photo gives a good idea of the layout and decor of Sainsburys in the 1940s and 50s as I remember it. The photo was actually taken in another town in 1906, so all Sainsburys were probably in the same style. In the 1940s and 50s, though, shortages and rationing were severe. Consequently a significant difference between the photo and my recollections of the 1940s and 50s is the amount and quality of the food on display. Another difference is that the photo shows gas lights hanging from the ceiling. In the Sainsburys of pre-war suburbia, the lights were electric. 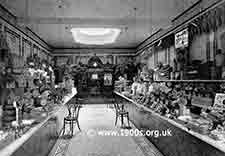 To me, as a child, walking into Sainsburys was like walking into a wonderland. It was a large shop, much deeper than it was wide, and every surface that could possibly be tiled, was tiled. The tiles were coloured mosaics with different patterns and inscriptions for the floors and walls; the counters were white marble; and the assistants all wore white. The whole impression was of lightness and cleanliness.

There was a single till with a cashier at the end of the shop inside a dark wooden carved cubicle. Presumably in the early years, customers had to line up there to pay, but in later years there was a flying fox system.

Above the cashier's cubicle was the shop clock which was helpful for customers, very few of whom had watches. In fact, shops seemed to regard it as a duty to have a clock on show.

There were chairs beside the counters for the use of customers.

Different counters served different foods and each counter had its own queue. Queuing was a way of life that was accepted, even though grumbled about.

Although some goods were ready-packaged, so that the shop assistant at any one counter just had to reach for them, much of the fresh food was weighed out and packaged separately for each customer - which took a long time! During rationing, the pre-packaged goods were labelled National or Ministry of Food.

Customers paid at a single till at the far end of the shop, which meant that the assistants handling food never handled money - which was reasonable as so little was pre-wrapped.

Model of wooden butter pats or paddles, showing how grocers used them to pat butter into the required size and shape for sale.

Publicity logos on the butter

Butter was freshly patted out for each customer from a large block according to the amount they wanted. Then the freshly patted out block was placed on a sheet of greaseproof paper on a scale. If necessary, knobs of butter were added or taken off to achieve the requisite weight.

The wooden pats (also known as paddles) were dipped into a container water between uses to prevent sticking.

There was only one type of butter during rationing and it was labelled National Butter. 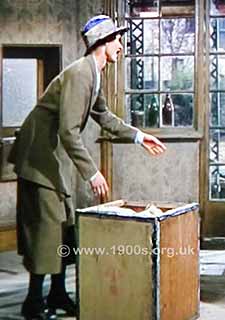 Woman unpacking from a tea chest. Detail from a screen shot from an old film.

Tea was loose in a big tea chest and was weighed out into a paper bag for each customer. During rationing it was one type, no choice.

Tea chests were large wooden boxes reinforced at the edges, usually with metal strips, and as their name implies, their purpose was for transporting and storing tea. In the 1940s and probably before, shops weighed out customers' tea directly from these tea chests and into paper bags. So, as tea was so widely drunk, there was no shortage tea chests and they tended to be regarded as throwaway items. Consequently tea chests were popular as storage and packing crates in homes and for moving house. Even as late as the 1960s, when my family moved house, the removal company brought along empty tea chests for us to pack into. Apparently it wasn't worth their while to bother to collect the empties afterwards. 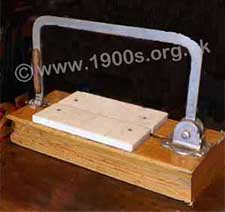 Cheese was in a large round lump and was cut with a wire. As far as I am aware, only Cheddar was available.

It was cut to size or weight with a cheese wire.

Sugar was weighed out into a paper bag labelled National Sugar. 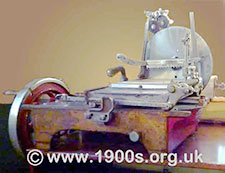 Old bacon slicer, photographed in the Museum of Nottingham Life.

Bacon slicers were on the counter to cut to order whatever thickness of bacon a customer wanted.

The cut bacon was wrapped in greaseproof paper and put into a paper bag.

Photos taken by the webmaster with acknowledgments to Beaulieu Motor Museum, The Museum of Nottingham Life and Fagans Museum of Welsh Life