Old sweet shops and the end of sweet rationing

The sweet shop that everyone knew

The sweet shop which I knew in my 1940s childhood was a chain store called Maynards. Everywhere seemed to have a Maynards. 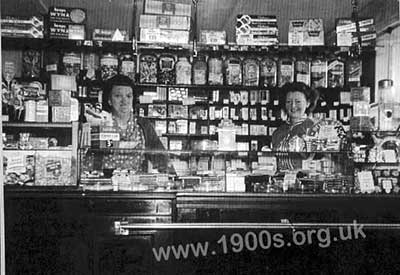 Inside a typical 1940s and 1950s sweet shop, where most sweets were weighed out for each customer from large glass jars and served in paper bags. Photo courtesy of Send and Ripley History Society.

Shelf of glass jars of sweets, photographed in Milestones Museum

Maynards shops were generally next to cinemas to capitalise on what seemed to be the normal expect­ation: that going to 'the pictures', as the cinema was called, was a treat and therefore deserving of sweets.

There is a photograph of the Edgware Maynards on the cinema page. If you tap/click to enlarge the cinema, you will see Maynards clearly.

I hardly remember it before the 1950s, but it was probably there earlier.

The reason that I hardly went into Maynards in the 1940s was that sweets were rationed until 1953. During rationing my mother bought sweets for me and she gave me my week's supply every Sunday.

The sweets were mainly what were known as boiled sweets because they were made by flavouring sugar water and boiling it almost dry so that the sugar was close to solidifying. Then hot liquid was poured into mouth-size moulds. There were other types of sweet, but all based on sugar. I find such sweets totally unappealing these days, but I suppose I must have liked them at the time. I remember being really taken aback when I first saw ready-wrapped bars of confectionary. Frys peppermint chocolate creams were my favourites

Customers could see the sweets in large glass jars on the shelves of sweet shops and choose what they wanted.

The sweets were weighed out separately for each customer and sold in paper bags.

Sweet shops couldn't have done a particularly good trade on confectionary during rationing, but I believe that they also sold cigarettes for which there was a constant demand.

The end of sweet rationing

The day after sweet rationing ended, my mother took my brother and me to a sweet shop in Edgware High Street, as it was rumoured to have a new delivery of sweets. By the time we got there, though, all that was left were a few sticks of liquorice flavoured wood chews - such disappointment after all the build up!

Every sweet shop and shops selling sugar sold out of their products by midday of the first ration-free day. I was too late to spend my meagre pocket money on sweets, except for an unfamiliar packet of Maltesers. My two older sisters quickly polished off what I offered them but I left enough for myself.