Why the growth of home televisions in the 1950s

One of the outcomes of the coronation of Queen Elizabeth II was that there was a large increase in the sales of televisions. This was because the BBC announced that the coronation was to be televised, which was something new and very special indeed at that time. My family was among those who bought a television for the occasion. 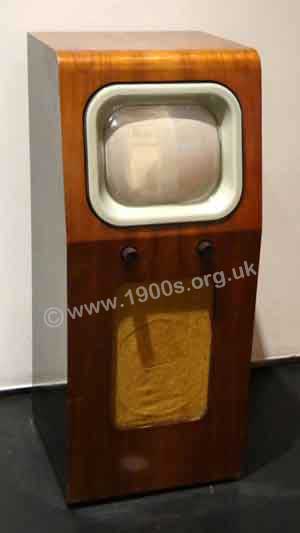 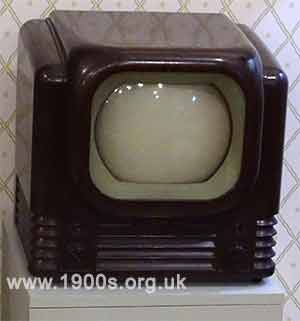 An early television, still needing a bulky case, but which could sit on an existing table. Photographed at an exhibition. 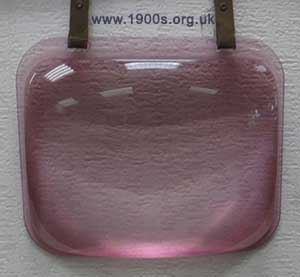 A television magnifier with straps for hanging over the screen

Perhaps it is only fair to point out that it was only the better-off families who bought televisions in the 1950s. My father was a senior engineer and although this certainly didn't make us wealthy, he probably brought in more income than the average man in the street.

The appearance of early televisions

Our television, like all televisions at that time was a bulky piece of polished wood furniture.

The screen was tiny - only 9 inches, measured diagonally, i.e. just under 23 centimetres, and the programmes were in black and white. Nevertheless we thought it wonderful, as previously we had had to go to the pictures (cinema) to see moving pictures.

The more expensive versions had doors to cover the television screen when not in use, so hiding the function of the television and making it look like another dark wood piece of furniture.

The poor picture quality of early televisions was largely a matter of 'numbers of lines'. Let me explain. In the early televisions, a cathode ray fired horizontal lines onto the inner face of the television tube 24 times a second. There were 405 lines which covered the whole screen. Even when the Pye company offered a bigger screen (perhaps as big as fourteen inches from corner to corner) the picture was not in the least clearer. Instead, the blank spaces between the lines were wider.

Later televisions were manufactured with 625 lines which promised much greater clarity, but it was a far cry from the quality of today's televisions.

The shape of early television tubes

Early television tubes had rounded ends which were the screens, and it was only the casing that made them appear rectangular.

Because the picture on these old televisions was so poor, some families attached screen magnifiers over the screens. My family didn't, but I did see them in use elsewhere and didn't like them. As the lenses were necessarily thick, they distorted badly for anyone not directly in front - not ideal for large families sitting around the room.

The earliest screen magnifiers were made of a sandwich of Perspex/Lucite, with the cavity filled with a clear liquid, possibly something like a mineral oil. I worked briefly in a television shop in my youth and I seem to remember that there was a bubble inside the magnifier. The rear sheet was flat, while the front sheet had a flat surround (for cementing to the rear) with the central area hot formed, probably under vacuum, to the appropriate lens shape.

These television magnifiers were heavy. Some had floor-stands while others had a strap system hanging over the top of the TV.

A newer and lighter type of screen magnifier came in with the larger 14 inch televisions. It was a flat Fresnel lens (a composite of thinner rings), though it, too, had viewing angle limitations. Also it cut down brightness.

Over the next few years, televisions became more popular in the home. By the 1960s the majority were no longer housed in the bulky wooden cabinet shown in the photo and the screens had become slightly larger. However, everything else that follows on this page still accurately describes them. They were a far cry from modern televisions: no colour, very poor resolution, tendencies for the picture to continually move up or down, no remote controllers and frequently breaking down.

To get the best picture quality from these old televisions, the position of the aerial was crucial. Aerials on rooftops were the norm, and often residential roads had a 'roofscape' of H-shaped aerials all along the road. I wish there was a picture to show you.

All the television controls were manual knobs that needed to be twisted to make adjustments. Apart from the obvious 'on-off' knob and the 'volume' knob, the ones that we had to use a great deal were the 'horizontal hold', the 'vertical hold', 'brightness' and 'contrast'. The vertical hold control was needed because the picture would all too often continously and slowly drift up or down and need to be adjusted to keep it steady. The horizontal hold was needed to correct the screen going jazzy. There was no control for changing programmes as there was only the one programme broadcast by the BBC.

There was of course no remote control. So it was unusual to be able to sit through a programme without having to get up to make some sort of adjustment.

The sensitivity of early televisions

Unlike wartime wireless sets which were sometimes found to be still working even after the ill-effects of a bomb blast, television sets were frighteningly sensitive. A slight bump could turn the picture into jumbled grey jibberish - only recovered by turning off the set, letting it cool down completely and then switching it back on and hoping it had 'sorted itself out'.

The television worked with valves which had a habit of blowing and were expensive to replace. So although my parents bought our first television, they, like most other people, soon resorted to renting. Renting was a type of insurance because it became the rental firm's responsibility to undertake all repairs free of charge.

The renting firm was called Radio Rentals, so presumably it rented out radios too. In retrospect, its name was rather surprising since everyone at the time still referred to a radio as a wireless.

The television programmes and intervals

Because television was so new, the programmes were based on known entertainment at the time: the theatre, cinema or street and park entertainment. So it was quite normal to have an interval in a programme to give viewers the chance to go and make a cup of tea. I particularly remember goldfish swimming around the screen during these intervals. The end of the interval was signalled by the sound of a ringing bell.

I also remember puppet shows for children, rather along the lines of the old Punch and Judy shows.

How films were shown on early television

A means of showing pre-recorded films on television was a very long time into the future. So what was shown was always live. The BBC had a device which projected the film onto a white screen which was itself broadcast live through a television camera. 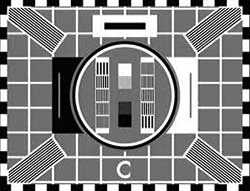 A test card was screened before the main transmission. It showed various shades of grey and lines in various direction so that the brightness and contrast controls could be suitably adjusted.

The programmes were transmitted from the Alexandra Palace and there was of course only one channel. The early programs were only transmitted for a few hours each day.

The beginnings of colour television

An attempt at colouring the screen before colour television

Another screen add-on was a flat plastic sheet, thin but not flimsy, that had the top area tinted blue, and the bottom tinted green, intended to make the picture more colourful. This was before true colour television was invented.

I first saw a display of what was said to be colour television at the 1951 Festival of Britain. It was displayed next to a screen of identical size showing the same programme on a standard black and white screen. The colour was so pale that I had to look carefully to see any difference between the two screens.